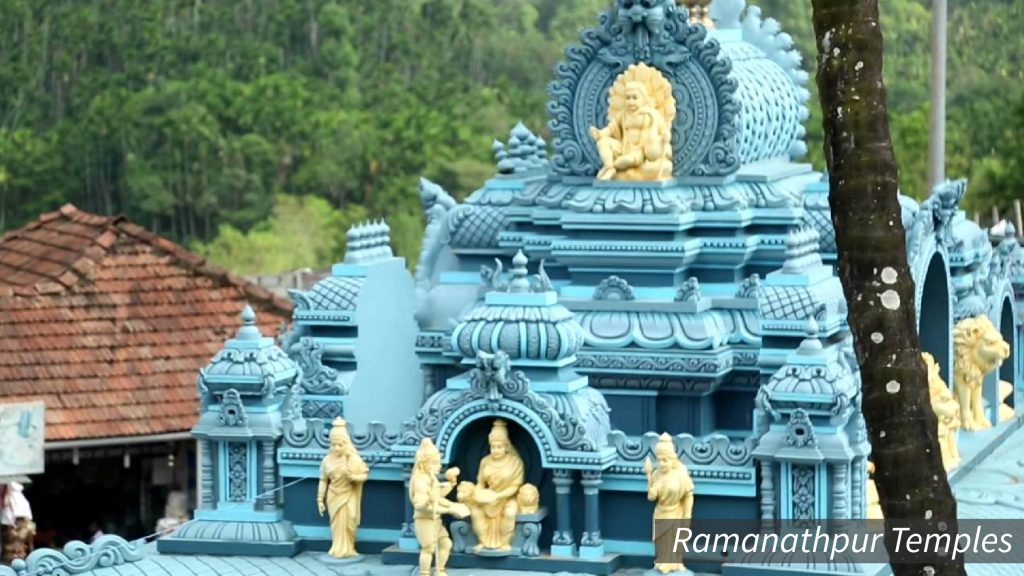 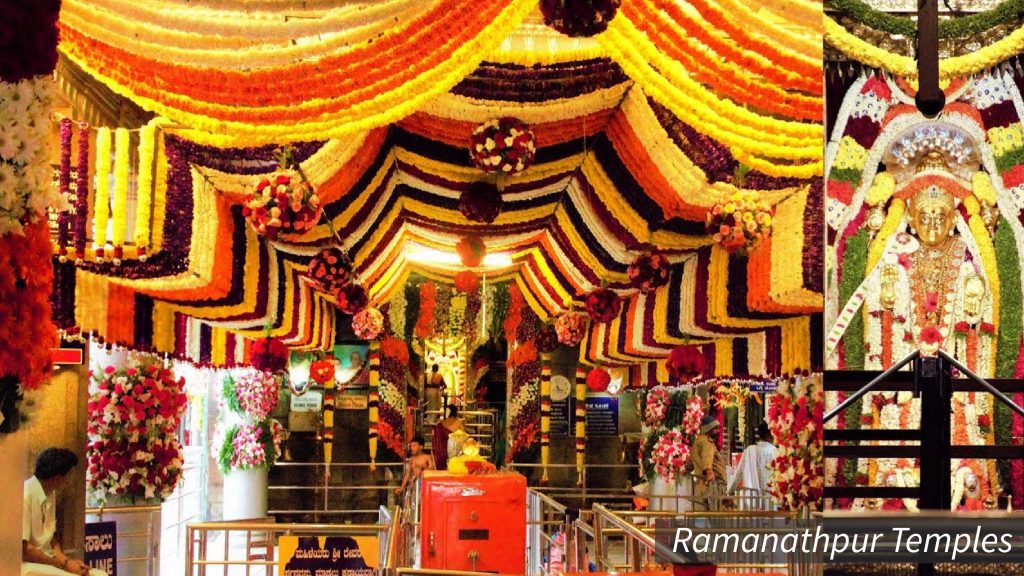 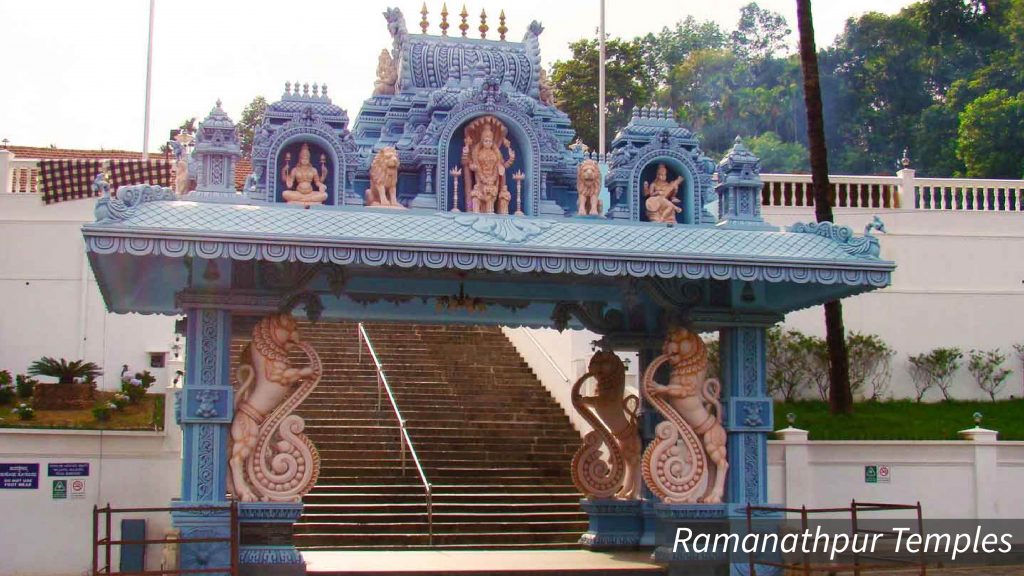 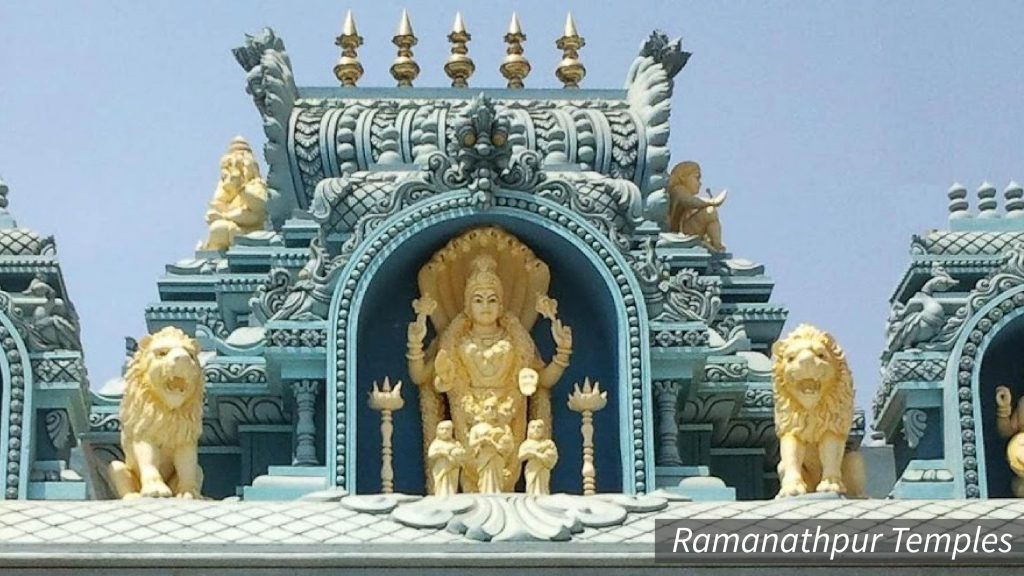 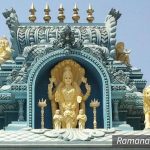 Annapoorneshwari Temple is located in Horanadu at a distance of 100 km from the Chikmagalur district of Karnataka. Goddess Annapoorna is revered in this temple and devotees from all across the Karnataka and India come to visit this temple. This temple is situated on the banks of river Bhadra and is surrounded by a deep dense jungle and valleys of the mighty Westeron Ghats. If you are a great admirer of nature, then you are going to love this place. Before you entered into the temple complex, you will be welcomed by a majestic and colorful entrance. In every step you take towards the temple, you can feel the positive and spiritual vibe within you.The name Annapoorneshwari means the goddess of food grains(Anna) and there are very few Annapoorneshwari  temples located all across India. This temple is one of the important religious and spiritual hotspots for many devotees.

This temple was built near about 400 years ago by Agasthya Maharishi in this strategic location on the bank of river Bhadra. You can have free food or Prasadam and shelter irrespective of your identity. This generous work of offering food and shelter to devotees and pilgrims has been in the process since this temple was built. The name of this temple  and the motive to feed people is in the alignment as the name Annapoorneshwari means feeding everyone. At times, this temple got some renovations for the longevity of its structure and architecture, but without hindering its original essence. You will have a great time and a soul satisfying experience due to the ambience of the temple and its surrounding. You wi;; get spellbound once you get a glimpse of Devi Annapoorneshwari. If you are seeking some peaceful and spiritual experience, this temple is the one you should put in your list.

The Annapoorneshwari Temple was built centuries ago by the great Agasthya Maharishi. You will be surprised to know that the temple premise is always open for the devotees and free food and shelters are offered to the pilgrims. All the maintenance and care of the temple is done by the Dharmakartharu or the temple trustees. This place was not that big until the 5th Dharmakartharu and was covered by the dense vegetation.

In the year 1962,  the renovation work of the temple complex was completed by establishing a stone sculpture of Goddess Annapoorneshwari with proper guidelines mentioned in Hindu scriptures, Vastushilpa and Astrology. The Punapratisthapana (reestablishment) of Devi Annapoorneshwari was celebrated on the sacred day of Akshaya Thadige in 1973. Apart from that, a Mahakubhabhisheka was organised by Sri Abhinava Vidyatirtha Mahaswamiji of Dakshinamnaya Sringeri Sharada Peetham.

According to the Hindu mythology, one day Lord Shiva and his wife Devi parvati were joyfully playing the game of dice. In that game, Lord Shiva lost to Devi Parvati and surrendered everything he owed to parvati. But Lord Vishnu advised him to play the game again and this time, he won the game. But Devi Parvati was not happy and got suspicious about Lord Shiva’s winning. They both went into an argument and to stop them, Lord Vishnu had to intervene in that affair. He told that he helped Shiva winning the game by creating an illusion. Lord Shiva also said that everything in this world is an illusion(Maya) even the food we take.

But Goddess Parvati didn’t quite agree with Lord Shiva’s philosophy and to prove him wrong, she disappeared at once. When she disappeared, the nature lost its vibe and all the living beings came to a standstill position. This situation led the Earth towards drought and each and everyone cried for food. When Lord Shiva saw the mayhem spread in the world, he understood that he was wrong and took back his words, i.e., food was Maya(Illusion). Listening to Lord Shiva that food is a basic need of every living being of the world, she reappeared and started giving food to the living beings in the world. People also say that Lord Shiva appeared in disguise in front of Devi Parvati and she offered him food.That’s the very reason why Goddess Parvati considered as Annapoorneshwari.

You will be welcomed by a grand entrance and can reach the main shrine of Goddess Annapoorneshwari by climbing the steps leading from the entrance. There is a Mandapa and a queue complex to the left of the temple entrance which will lead you to the place where the food or Prasadam is served to all devotees and pilgrims. You can witness many Hidu Gods and Goddess being sculpted on temple complex. The art work can also be perceived on the ceiling of the temple with some intricate and beautiful carvings.

You can attend the Maha Mangal Aarti at 9:00 AM, 2:00 PM and 9:00 PM. Devotees come here with their newborn baby for name giving ritual and ceremony and with their kids for the Aksharaabhyasam ritual before they send them to school.This is for seeking for the blessing of generous Annapoorneshwari and Goddess Saraswati.

Rathotsava: is celebrated annually in the month of February to March for five days.

Akshaya Thadige: is also known as Akshaya Tritiya which falls in April or May every year. This day is considered as the birthday of Goddess Annapoorneshwari. It is an auspicious day for all Hindus.

Navaratri: This day is the most important festival celebrated in every part of India. It is celebrated for nine long day between September to October.

Panchamrutha Abhishekam (performed on all other days): INR 30

2. Shurkravar Seva: Or Friday seva is performed for 52 weeks, ie., for one year on every Friday: INR 2500 per year

The best time to visit Annapoorneshwari Temple is in winter(September to March) due to the pleasant weather.

Annapoorneshwari Lodge: This lodge lies in the close proximity to the temple. It is quite affordable for devotees and pilgrims who comes here with their family. You can find this lodge clean and pleasant. You can also get the cab facility to pick and drop service

Bhadra Nivasa Lodge: This lodge is administered by the temple administration and it lies quite close to the temple complex. You can have a wonderful view of the temple and its surrounding. The tariff of this lodge is between  INR 250 to INR 2500. You will have all the facilities along with some friendly and hospitable staff.

1. You can go for some affordable accommodation options.

2. You need to provide your ID proof in order to stay in the lodge under temple administration.

3. Carry an umbrella or raincoat just in case you are planning to visit during monsoon.

5.You should follow the traditional Indian dress code. If you are a man, then you need to remove your shirt and put a towel or shawl to cover your shoulder. Women don’t have any such dress code but it is good to wear non-distracting dress.

How to Reach Annapoorneeshwari Temple

You can drive all along 50 km from the Chikmagalur in the road cutting through the dense forest of Western Ghats. Once can also take the public bus services from the main town of Bangalore.