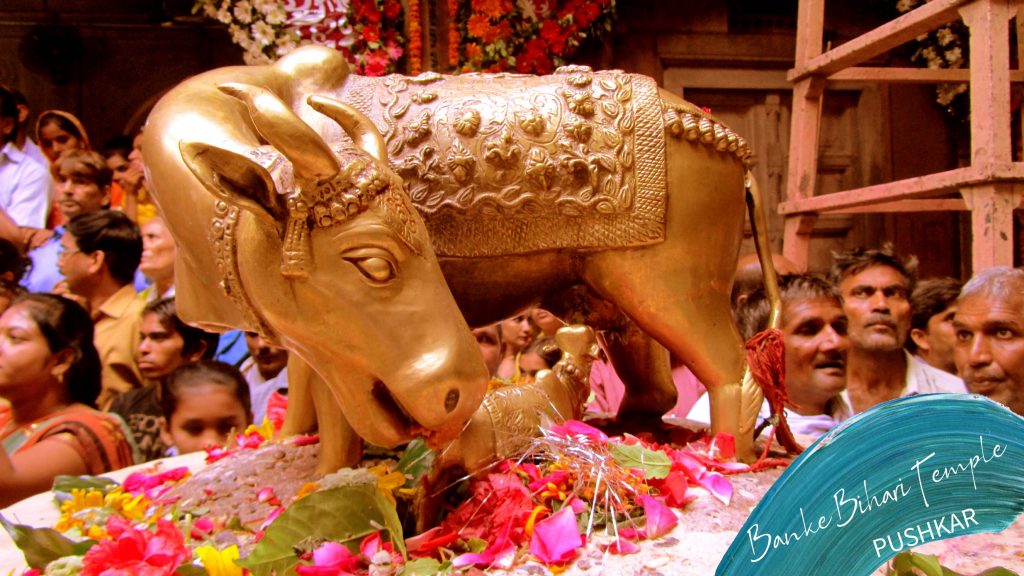 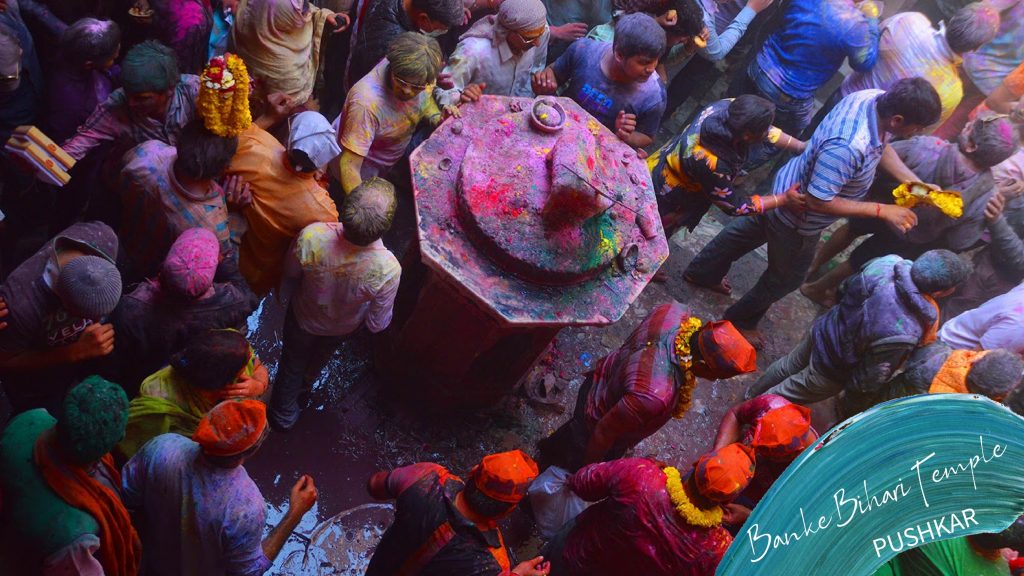 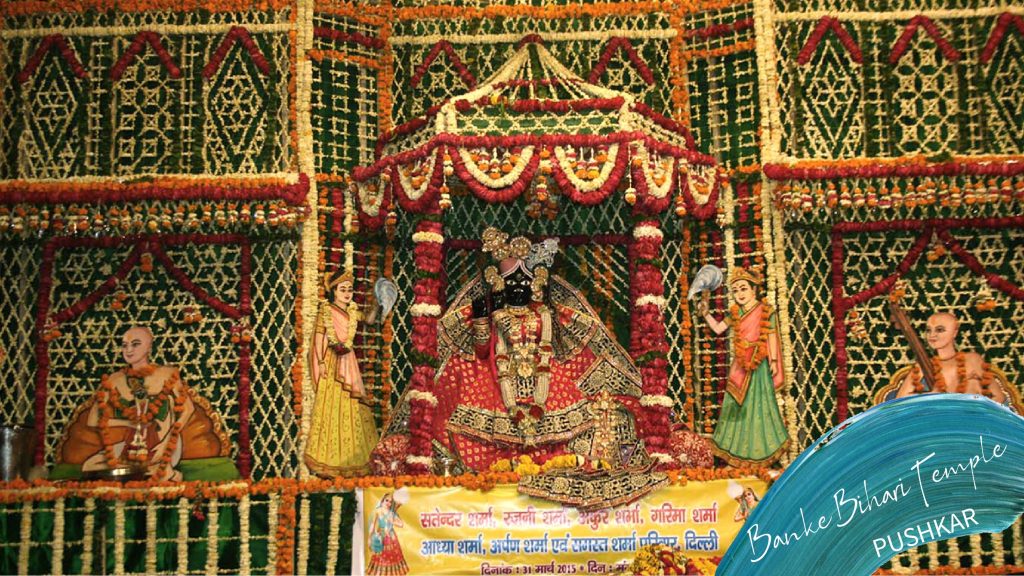 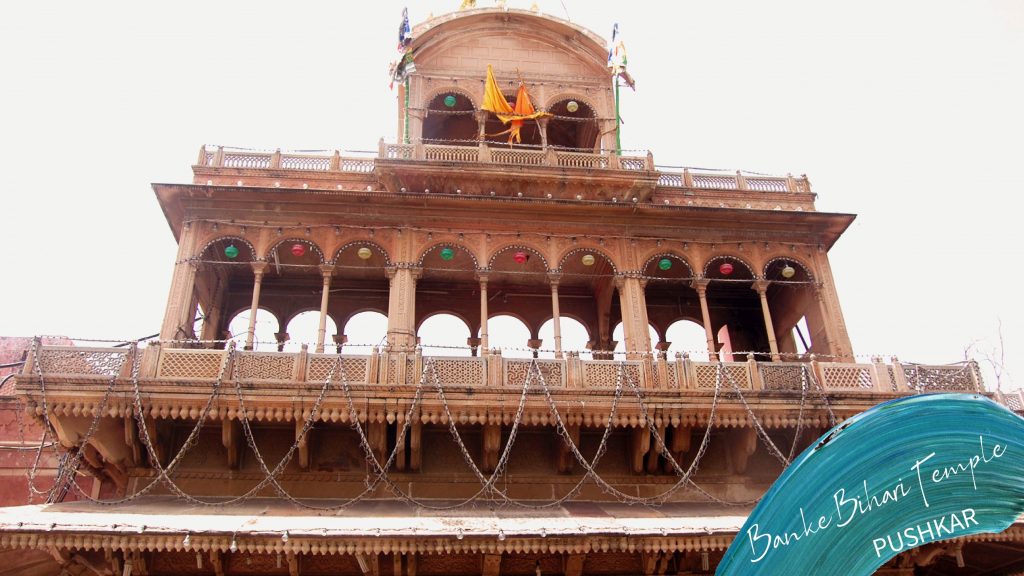 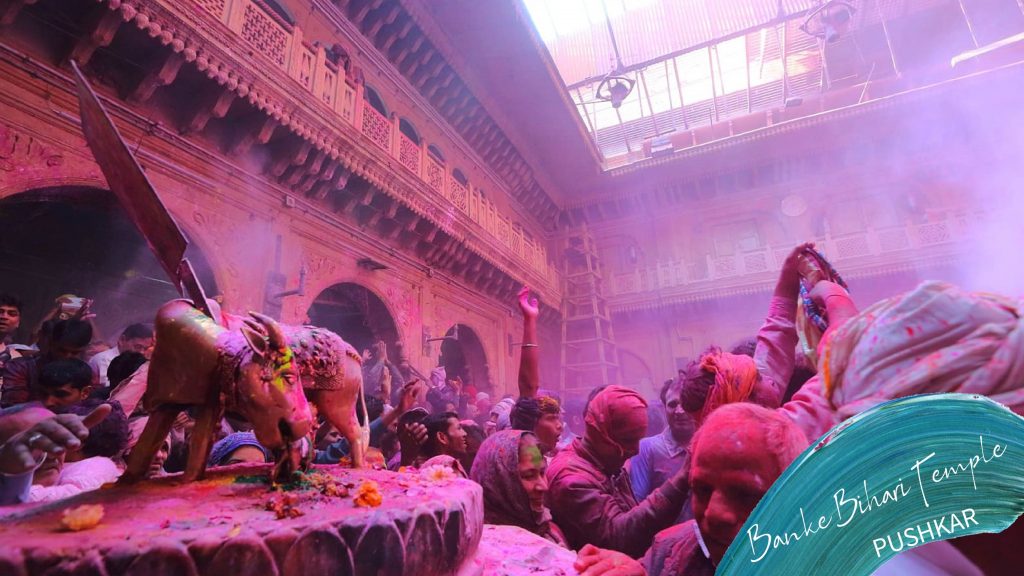 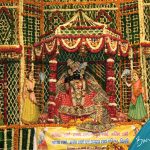 Shri Bankey Bihari Mandir is situated in Vrindavan City in the district of Mathura. The temple is devoted to Lord Krishna and it lies very close to the famous Radhaballabh Ji Temple. The name of the temple is derived from two words namely Bankey, meaning ‘a bent in three places’, and Bihari, meaning ‘a supreme enjoyer’. This temple is one of the seven temples dedicated to Thakur of Vrindavan. The idol of Lord Krishna standing in his Tribhanga posture is firmly fixed inside the temple. The Lord was earlier was worshipped as Kunj-Bihari by Haridas Swami.

The idol of Kunj-Bihari was gifted to Swami Haridas by the saintly couple Shyama and Shyam. It is said that impressed by the devotion, the Lord appeared in-person in front of the devotees and left-back stunning black impression before disappearing into the thin air. Bhiariji is worshipped in a unique way and there are three sets of rituals to be followed- Shringar, Rajbhog, and Shayan. The first two rituals are performed in the forenoon and consist of bathing, dressing, and adorning the idol with jewelry and feasting respectively. Shayan Sewa, which means evening sleep,  is offered during the evening.

Banke Bihari Temple is one of the holiest places in India. Known for its serene environment and spiritual aura, the temple is visited by a lot of devotees all throughout the year. The idol of Bankey Bihari Ji is worshiped and given a childlike care by the priests and the devotees.

Inspired by the Rajasthani style of architecture, Banke Bihari Temple represents a splendid work of construction of the rich bygone era. The temple has not lost its charm even after 150 years.

Banke Bihari temple was built during the year 1864 with assistance from Goswamis. Shri Swami Haridas was gifted this idol by the cosmic couple Shyama and Shyam, and later he brought this idol to Vrindavan. The statute of Lord Krishna is much older and was worshipped in a place named Nidhivan.

The suitable time to visit this place is during the monsoons season. The weather is pleasant and with occasional rainfall, the freshness in the air is rejuvenated.

Photography is strictly prohibited inside the temple.

How to Reach Banke Bihari Temple Vrindavan is situated on Delhi-Agra national highway 2. The temple is well connected with both state and private bus services from major cities like Mathura, Agra, Delhi, etc. The temple is about 7 km inside of the highway, so once you get down of the bus, you can hire tempos and rickshaw to the temple.