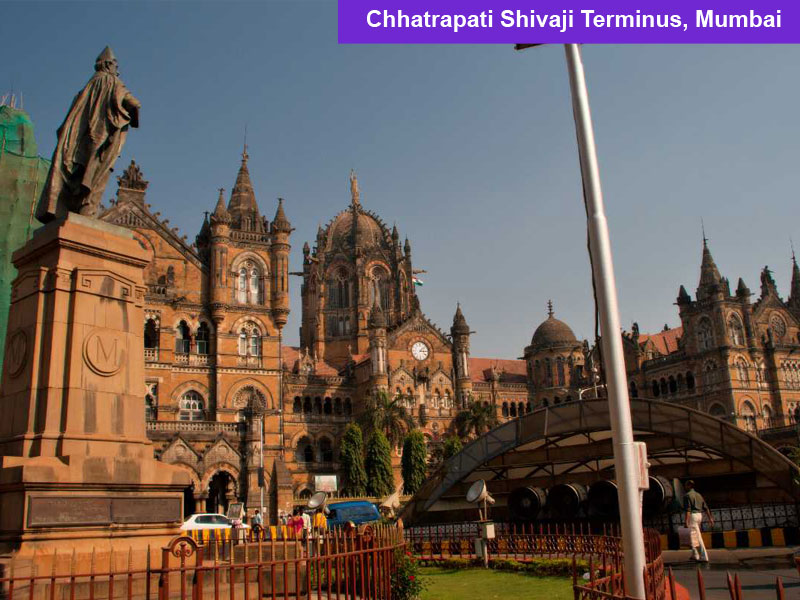 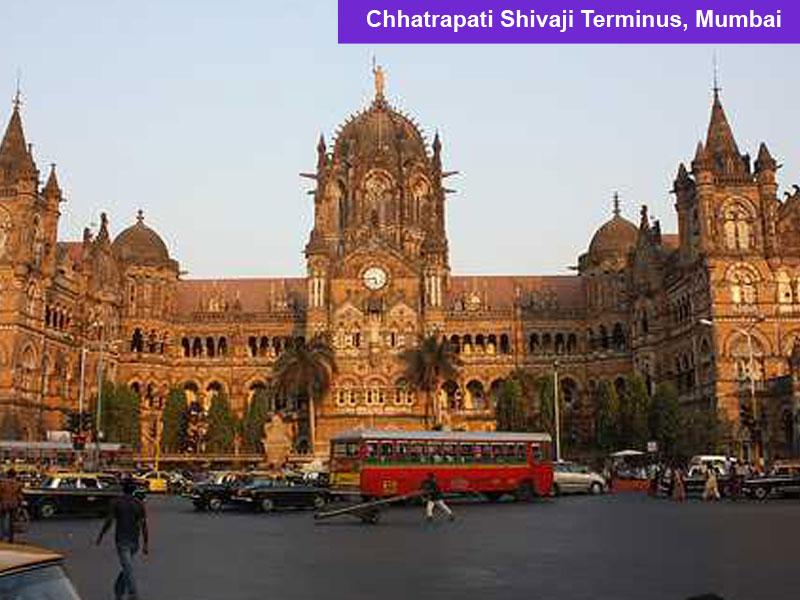 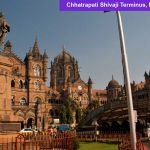 Formerly known as Victoria Terminus, Chhatrapati Shivaji Terminus (CST) is one of the magnificent archaic yet modern architectures situated in Mumbai City. It is a perfect illustration of Victorian-Gothic architectural style which was constructed in 1878. This railway terminus was also nominated as the UNESCO World Heritage in 1997. There are a few parts at CST which will make you feel like you are living in the British era.

One of the busiest railway stations in India, CST is a popular historical landmark in India which has also featured in several Bollywood movies and TV series. The popular song from the movie Slumdog Millionaire, Jai Ho, and scenes from Bollywood movie Ra One were also shot here.

Chhatrapati Shivaji Terminus is the headquarter of the Central Railways and is well-connected to different parts of the nation. Both short distance and long-distance trains are available from CST. In fact, CST is known for the Mumbai local trains which are also referred to as the lifeline of Mumbai. Thousands of tourists are attracted to this place due to its exquisite and marvellous architecture. During night time, the monument is lit with multicolour lights which makes it look very beautiful.

The Chhatrapati Shivaji Maharaj Terminus, earlier known as Victoria Terminus during the colonial era, used to be a warehouse that facilitated the export and import of goods to Mumbai from different parts of the world. A railway station was built at this location in 1853 and was named as Bori Bandar Railway Station. In fact, the first passenger train to operate in India was from Bori Bandar to Thane in the year 1853. In 1887, it was agreed to rebuild this railway station to celebrate the Queen Victoria Golden Jubilee. Consequently, the Bori Bandar Railway Station was officially renamed as Victoria Terminus.

Known for its exquisite architecture, CST was designed by a well-known architect, F.W. Stevens, who incorporated British and Indian styles of architecture while planning the blueprint of this monument. It took around 10 years to completed its construction and it cost around 2,60,000 Sterling Pounds. It is supposedly the most expensive structure in Mumbai.

The Ministry of Railways renamed it as Chhatrapati Shivaji Maharaj Terminus and is commonly referred to as  CSMT or CST (Chhatrapati Shivaji Terminus) in 1996. Unfortunately, Mumbai was the prime location of a terrorist attack in 2008 and CST was on the hit list. Even after 130 years, CST stands tall and caters to the needs of millions of travellers in Mumbai every day.

Victoria Terminus’s design is based primarily on Victorian Gothic Style of Architecture. It represents a perfect fusion of Victorian Gothic Architecture with Indian Architecture. Indian style is prominent on the meticulously carved arches, the skyline and the turrets. A major contribution to its design was also made by the students of Jamsetji Jeejebhoy School of Art. The well-defined tiles, wood carvings, the ornamental railing and grills made of metal were a few of their major contribution made to the architecture of CST.

The main dome of CST has beautiful dovetail ribs. Moreover, there is a 330 feet long platform that connects to the rain shed which, is in turn, 1200 feet long. You will be fascinated by the interior finishing of the terminus as well. There are large hallways with high ceilings. The main attraction of the structure is the central octagonal dome. It comprises of a female figure holding a torch in her right hand and a wheel with crosspieces in her left hand. The sprawling courtyard is fenced by side wings which are supported by turrets on each corner.

The outer portion consists of multiple arches and windows. There are statues of lion and tiger that supposedly represent Britain and India respectively. The monument is made of Italian Marble, sandstones and limestone. Out of 18 platforms, 8 are used by trains headed to suburban areas while 10 are dedicated to intercity trains. In addition to this, there is an air-conditioned dormitory that can accommodate around 20 women and 58 men, as per the beds available.

The most suitable time for visiting Victoria Terminus is between October and February. During this time of the year, the weather is pleasant as compared to the usually hot and humid weather of Mumbai.

How to Reach Chhatrapati Shivaji Terminus?

CST is the main terminus in Mumbai and hence, is easily accessible from any part of Mumbai. You can take a local train from Central Railway Station or any suburban station to reach CST. All the trains have a stoppage here.