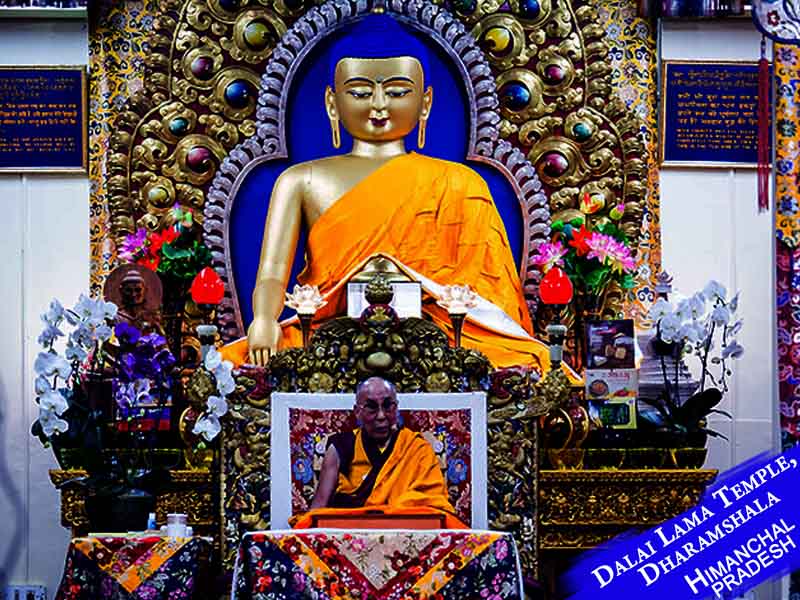 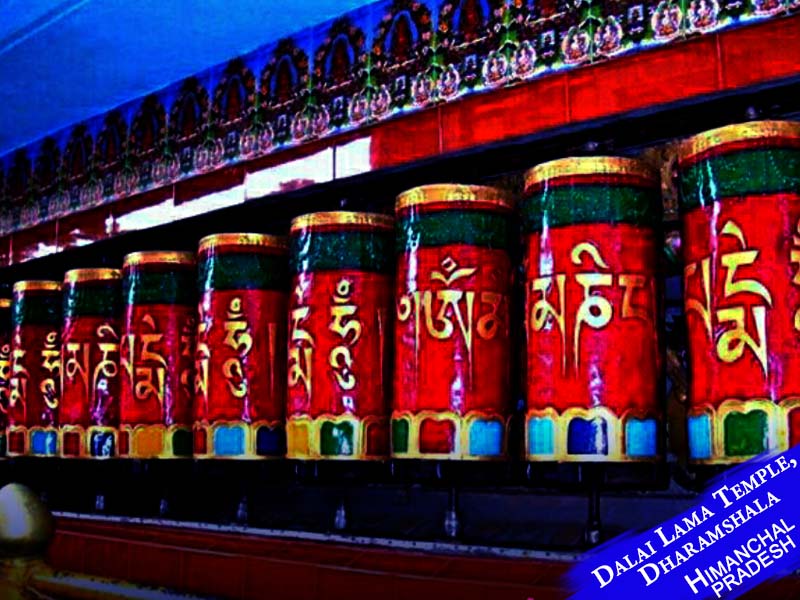 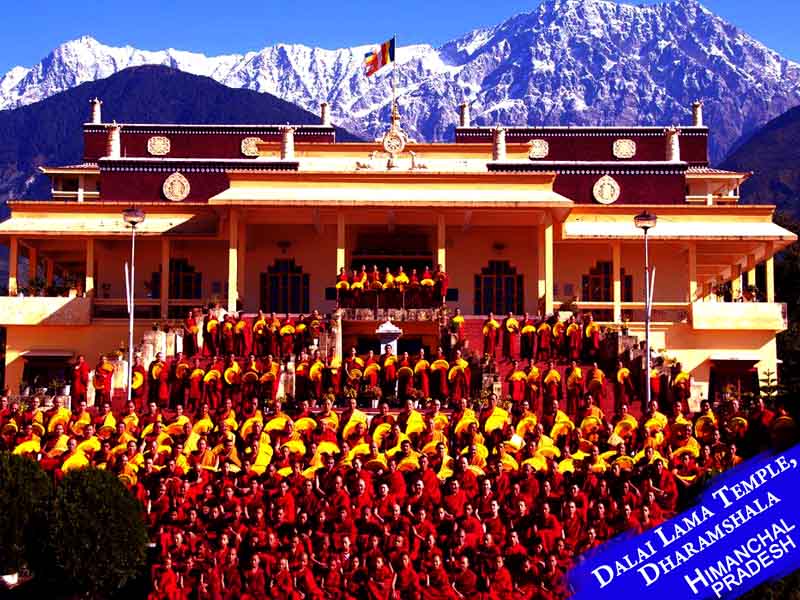 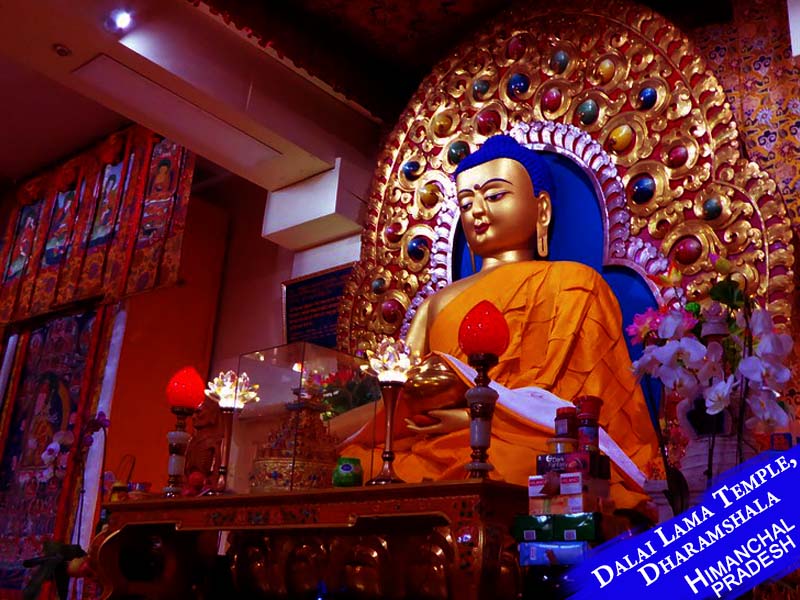 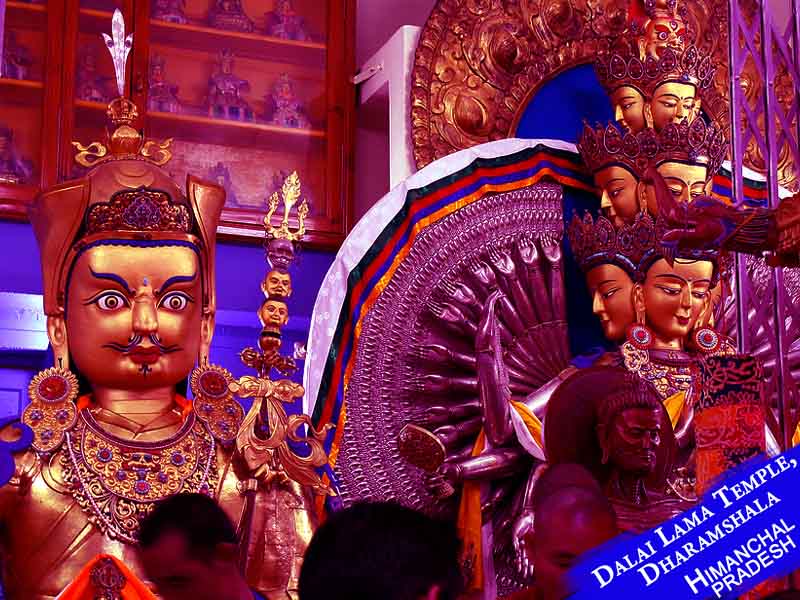 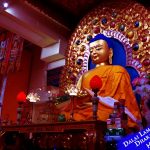 Dalai Lama temple is also called as the Tsuglakhang temple. Tibetan culture dominates the atmosphere of this temple. It is considered as a great politico-religious center in the town named Dharamshala. It is an ideal place for religious rumination and meditation. The holy place is always crowded with lamas who are chanting on beads or prayer wheels throughout the whole day. The serene temple lies nearby Dalai Lama’s adobe. He visits here frequently to carry out prayer meets and preach his religious views. The temple is quite famous for its mesmerizing setting and has turned into an honored worship spot for the Buddhists. Apart from this, the calmness, serenity, and tranquility attract people who are in search of Nirvana and peace.

The huge complex has some gigantic statues of Padmasambhava, Avalokiteshvara, and some other Buddhist monks. A gigantic idol of Lord Buddha sitting on a high platform is one of the prime attractions of this temple. The temple houses the main prayer wheel. It is situated at the very center of this temple. The wheel has golden plates and has slogans of ‘Om Mani Padme Hum’. The devotees usually stroll around the platform to pay respect to the Lord Buddha and spin the wheel of prayer to gain the blessing of the Lord. People believe that when they rotate the wheel their worth is multiplied and they get enormous blessings. There is a large prayer room attached which lets a huge number of devotees to contemplate and use some hours in tranquility and peace. Some shops on the premises of this temple sell books on meditation, peace, religion, and Nirvana. They also sell knick-knacks and souvenirs. The temple is in the lap of quiet mountains and it offers one the much-needed seclusion and calmness like no other place.

Dalai Lama museum is one of the best attractions of the Tsuglakhang Complex. It has preserved Dalai Lama’s old pictures and rich Tibetan culture. In 2000, the museum was started off by the 14th Dalai Lama. The museum has an interesting short video clip on Buddhist culture and its teachings. Except on Mondays, the museum is open to the visitors from 9 in the morning to 5 in the evening. You would be charged rupees 5 as the entry fee here.

Dalai Lama temple is mainly visited to witness the sermons and preachings of Dalai Lama. He uses the Tibetan language while teaching so people can bring translators to understand his preachings. Or else visitors can snoop to his speeches on the radio where the speech can be auto-translated into several other languages like French, English, Hindi, Chinese, Korean, Japanese, etc. Because people have to sit on the ground so they are asked to get a cushion, a tumbler and a hat.

One can get an online list of the dates of Dalai Lama’s orates because they are decided in advance. But only at the Tibetan Branch Security Office in McLeod Ganj tickets can be bought. People are free to register themselves 3 days before. Rs 10 are charged as the service fee per head for each session. The Teaching hours are also fixed and are notified to the visitors.

Though the Tsuglakhang complex can be visited all through the year, an ideal time to come here is from March to September.  The drizzly snow crystals covering all around are bills to the eyes and can turn one’s trip memorable.

How to Reach Dalai Lama Temple