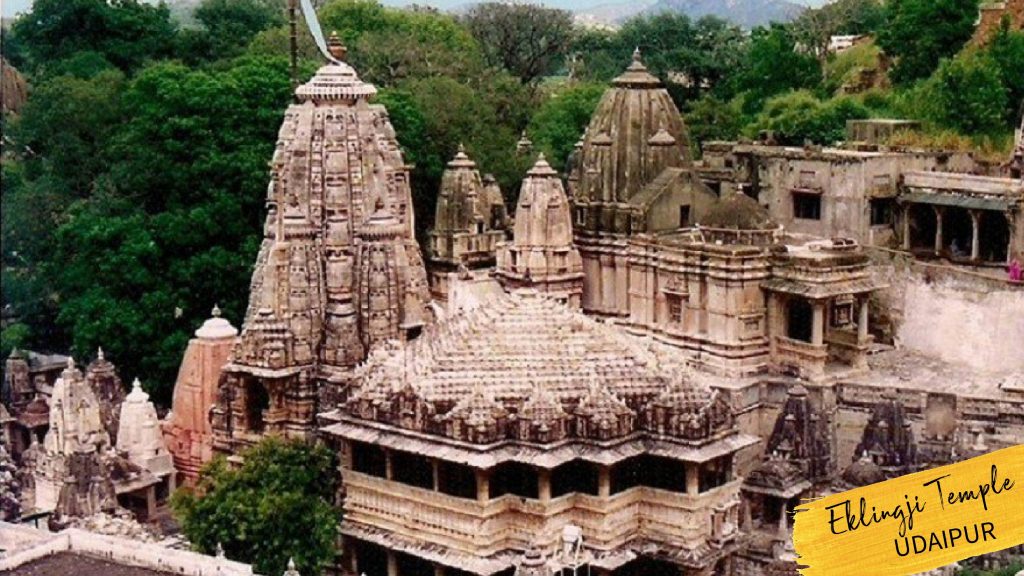 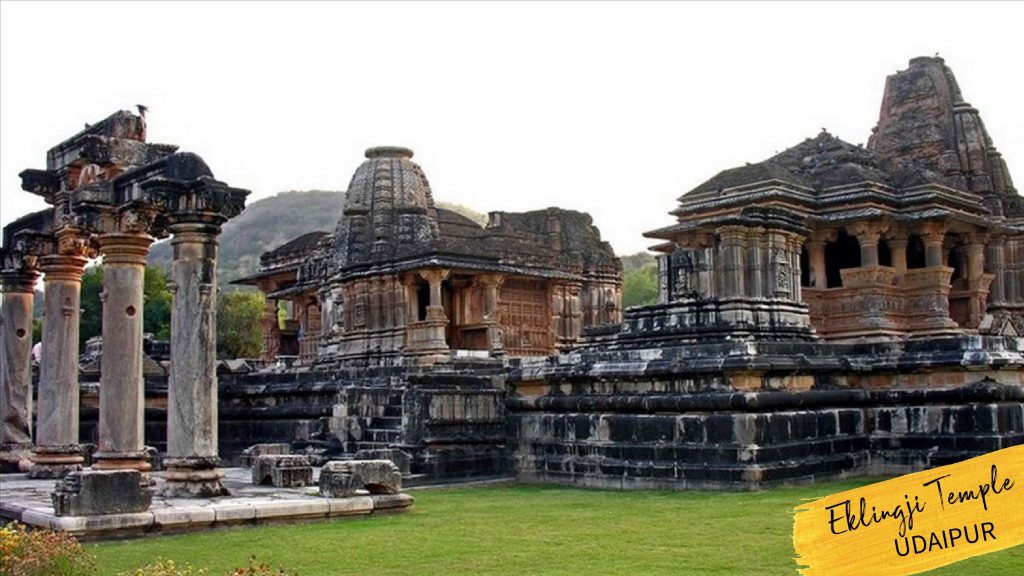 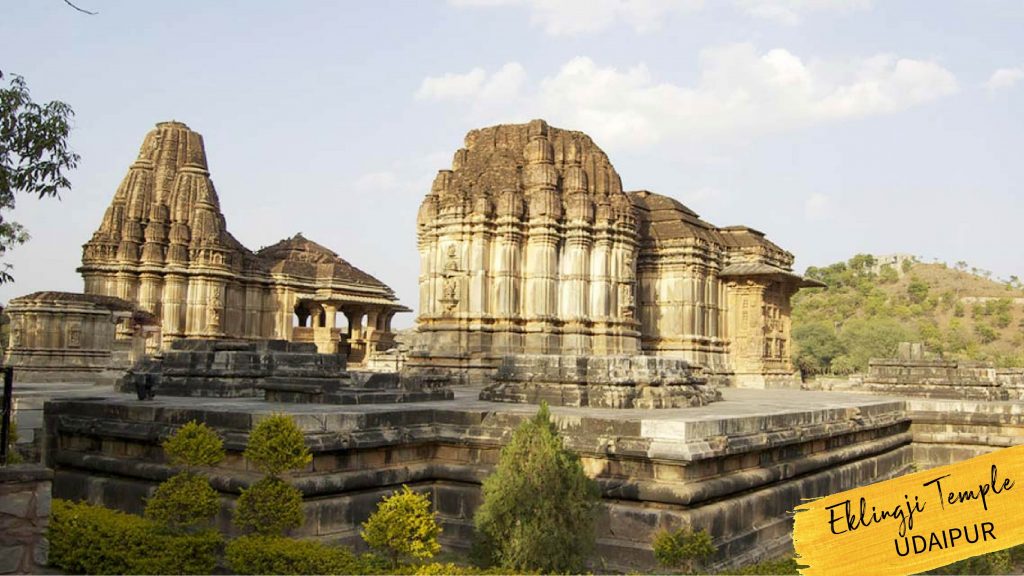 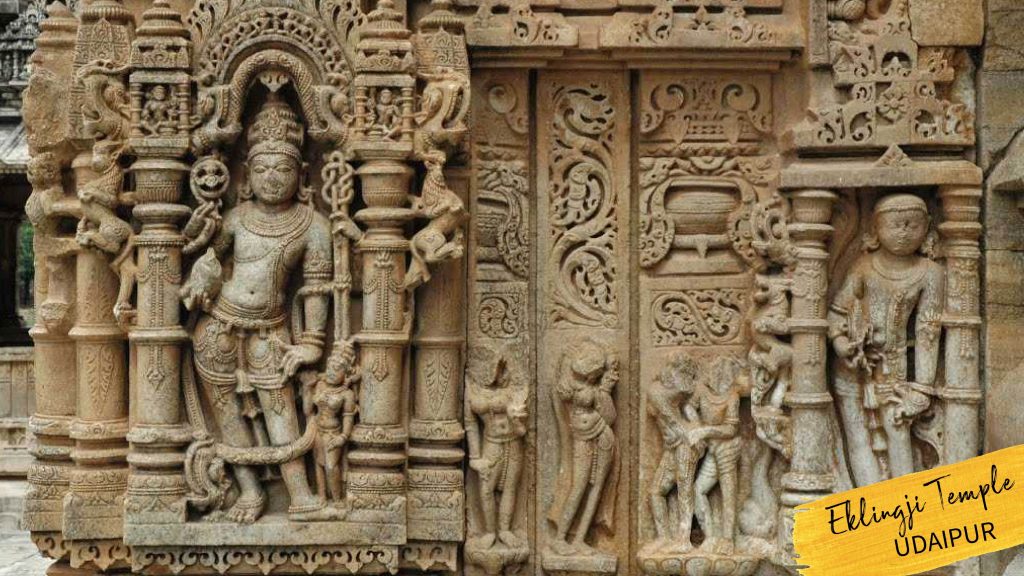 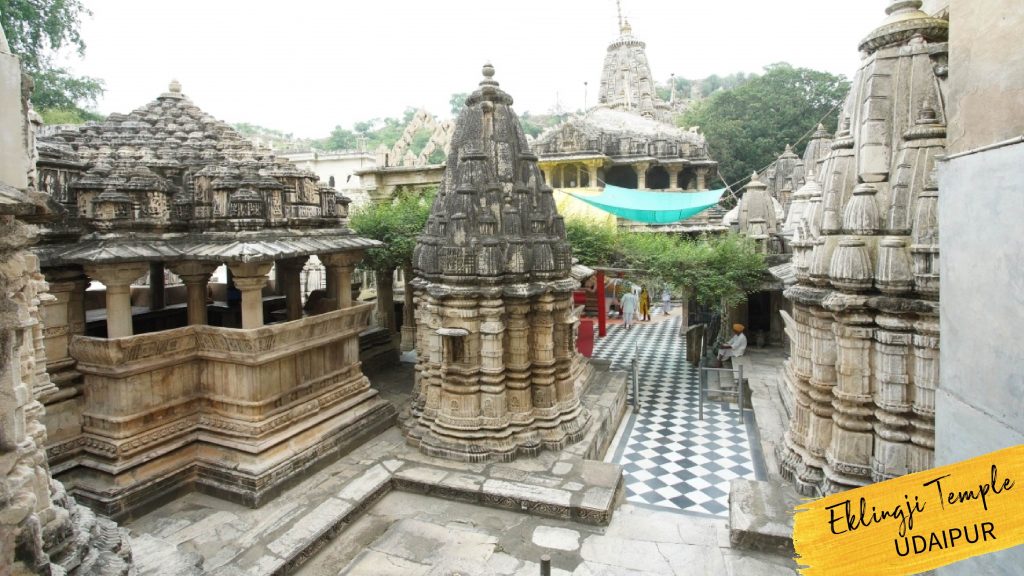 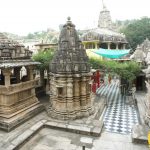 Eklingji Temple is devoted to Lord Shiva and is one of the most popular Hindu shrines in Rajasthan. It is well-known for its marvelous architecture and a lot of tourists visit the temple throughout the year. The closest city to this place is Udaipur, situated at a distance of about 22 km.

You will be mesmerized by its unique architecture which constitutes two floors, a pyramidal-shaped roof, and a beautifully carved turret. The front yard of the temple has steps that elegantly descend into the cool water. The main shrine or the worshipping place is situated in the heart of the temple complex. It is a canopied area supported by majestic pillars and is commonly known as ‘mandap’ in the local language.

It was in the year 734 AD Eklingji Temple was built by the brave ruler of Mewar named Bappa Rawal. As you step inside the temple, you will be in great admiration of a splendid image of Nandi painted in a shiny silver color. As you further delve into the temple, you will notice the other two images of Nandi carved in brass and black stone.

The idol of the chief deity of the temple, Eklingji, is installed in the mandap. The most fascinating aspect of this idol is that it is a four-faced idol of Lord Shiva carved out of pure black marble. The four faces symbolize the four avatars of Lord Shiva and the idol is as tall as 50 feet. There is also a silver snake wrapped around this idol.

The weather in Udaipur and surrounding regions gets unbearable due to the scorching heat in the summer months. It is advisable to visit Udaipur during the winter season as the weather is pleasant and comforting. You can travel to this place during Monsoons as well but due to scanty rainfall, there is not much difference in the heat. Therefore, it is recommended to plan your trip anytime between October and March.

There are many affordable hotels in Udaipur. Depending on your budget you can choose the most comfortable place to stay. The hoteliers can also arrange a trip around Udaipur. In order to save time and money, don’t forget to enquire about the same. A few of the hotels that are known for splendid hospitality are as follows: Hotel Barmer House, Hotel Flora Club Mahindra, Hotel Devi Garh, The Royal Inn, and Hotel Golden Tulip Udaipur.

Once you are in Udaipur, you have the option to travel and explore many interesting nearby places. Various forts and palaces such as the Lake Palace, City Palace, Fateh Prakash Palace are also situated in the close proximity of the temple.

You can also take a stroll and relax alongside several lakes situated near to the temple including Lake Pichola, Fateh Sagar Lake, Rajsamand Lake, and Jaisamand Lake. To make your trip a little adventurous, you can opt for boating at these lakes as well.  You can also take some time out and visit the Bagore Ki Haveli and Maharana Pratap Memorial to get acquainted with the Rajasthani royal lifestyle.

Udaipur will not disappoint you when it comes to shopping. There are many marketplaces in the city that is packed with roadside street shops, small stores, big showrooms, etc. that sell a variety of products. Udaipur is known for its traditional handicrafts and fabrics. As you explore the bazaars you will be mesmerized by the enthusiasm present among the shopkeepers.

You can choose to shop from a wide array of products such as wall hangings, bewitching puppets, cloth lanterns, painted wooden boxes, toys, greeting cards, pen stands, handmade papers, etc. Shopping here is incomplete without having purchased a few clothes. You will for sure be stuck in a dilemma while choosing from the awesome colorful traditional attires sold at the bazaars of Udaipur. The region is popular for dyed saris, batik clothes, tie-and-dye fabrics, and many other traditional dresses.

Do not forget to explore the jewelry and silverware at various stores. You can buy a few silver jewelry, precious stones, and ornaments made of Kundan. A few of the popular shopping centers in Udaipur are Palace Road, Hathi Pol, Bada Bazaar, and Chetak Circle.

While shopping in these markets, don’t forget to negotiate with the shopkeepers to get the value of your money. You can also visit Sadhna and Rajasthani which are two emporiums and curio shops managed by the government.

Hiring a taxi or a cab is a convenient way to explore the places around the temple.

The local crowd of Udaipur comprises of multilingual people. The most widely spoken language in the region is Mewari, however, Rajasthani, Hindi, and English languages are also commonly used by the locals. The people of Udaipur are friendly, welcoming, simple and cheerful.

The people here are fond of cultural dance that adds spark and liveliness to the beautiful city. Bhavai, Kalbeliya, Ghoomar, Terah Taali, and Kachhi Ghodi are some of the dance forms unique to Udaipur.  People here are also passionate about local folk music and musical instruments such as Naad, Morchang, Sarangi, Tanpura, etc. These instruments were widely used in the courts of Mewar rulers.

The city of Udaipur might seem small but it does have an awesome nightlife.  There are good bars and pubs all over Udaipur. Apollo Beer Bar, Shilpi Restaurant, Rangat Bar (Green View Hotel), etc. are some of the bars situated in the city.

The eateries around the city offer awesome vegetarian cuisine. Most of the dishes are made of a variety of vegetables and lentils. The scrumptious dishes are seasoned with a lot of spices thereby, allowing you to relish the authentic hot and spicy taste of Rajasthan. Ocra, a form of dried mango, and beans of ‘sangri’ are offered with almost all the cuisines here.

After reaching Udaipur, relax at your hotel and freshen up. Later in the day, take a bus or hire a taxi to Eklingji temple. Explore the beauty of this temple and for lunch, you should visit one of the restaurants nearby and try out the hot and spicy cuisine of Udaipur.

In the evening, head to some of the beautiful lakes of Udaipur and spend your time relaxing and enjoying the tranquility at the lakeside. On the second day, you can set out to explore brilliant forts and Havelis of Udaipur.

Keep your belongings safe in the temple. You might want to hire a guide, in order to enhance your knowledge about the region, while visiting other places around Eklingji.

How to Reach Eklingji Temple

Air:   The nearest airport to the temple is the Maharana Pratap Airport situated at a distance of about 22 km from Udaipur city. The airport is well-connected with major cities such as Jaipur, Delhi, Kolkata, and Mumbai. Cab services are available from the airport and you can avail of one to reach your hotel.

Rail: Udaipur Railway Station is the major railway station in the region and has a well-connected railway network with cities like Jaipur, Mumbai, and Delhi. If you are traveling to Udaipur from Delhi/Agra, you can book your tickets for the famous and luxurious train named Palace on Wheels.

Road: Udaipur is easily accessible by roadways from major cities such as Delhi, Indore, Kota, Ahmedabad, Ajmer, Chittorgarh, Jaipur and Mt. Abu. Depending on your budget, you can make your bookings in either AC Deluxe buses or Non-Ac buses. You can also hire taxis and cars to reach Udaipur by road.