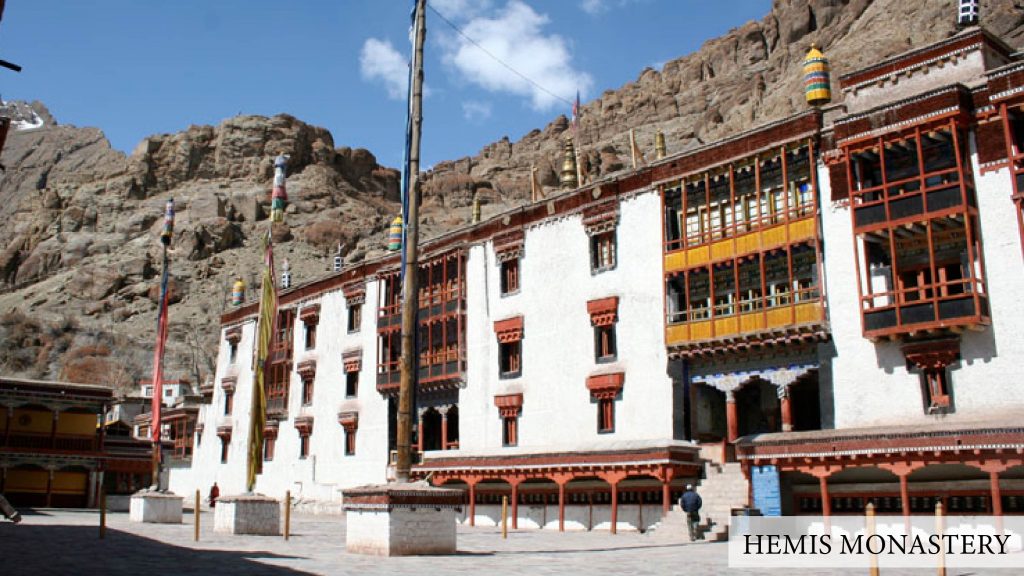 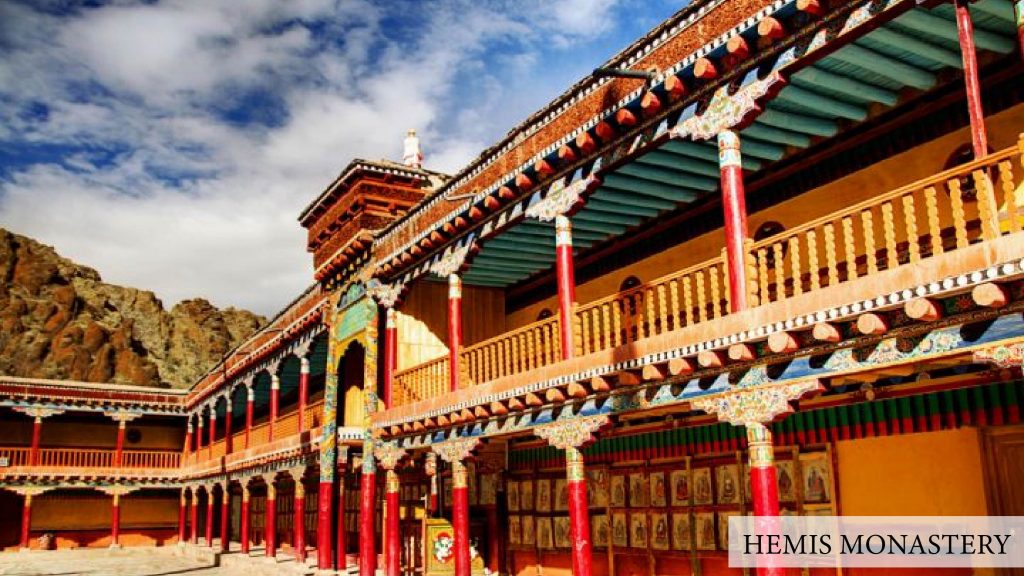 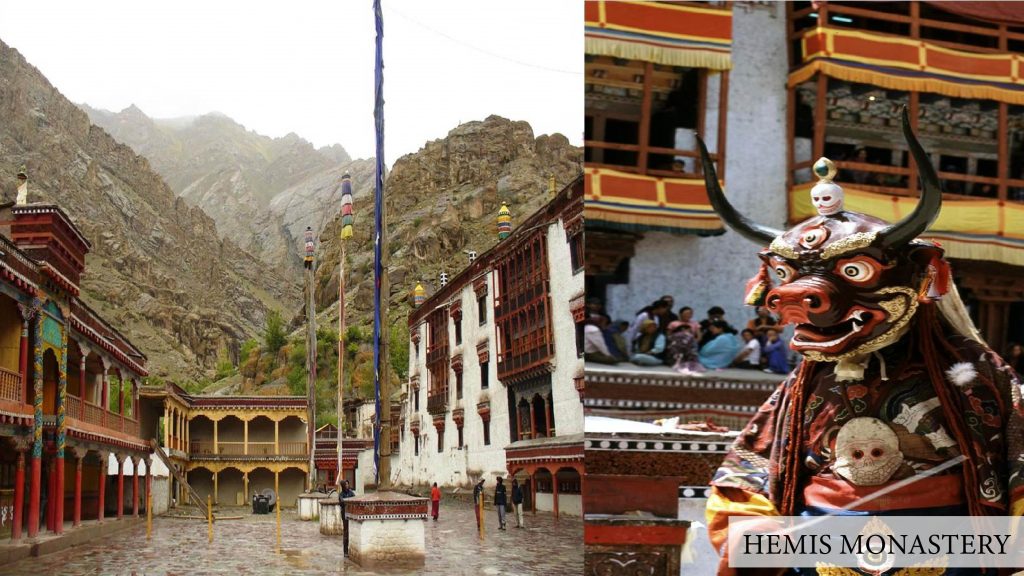 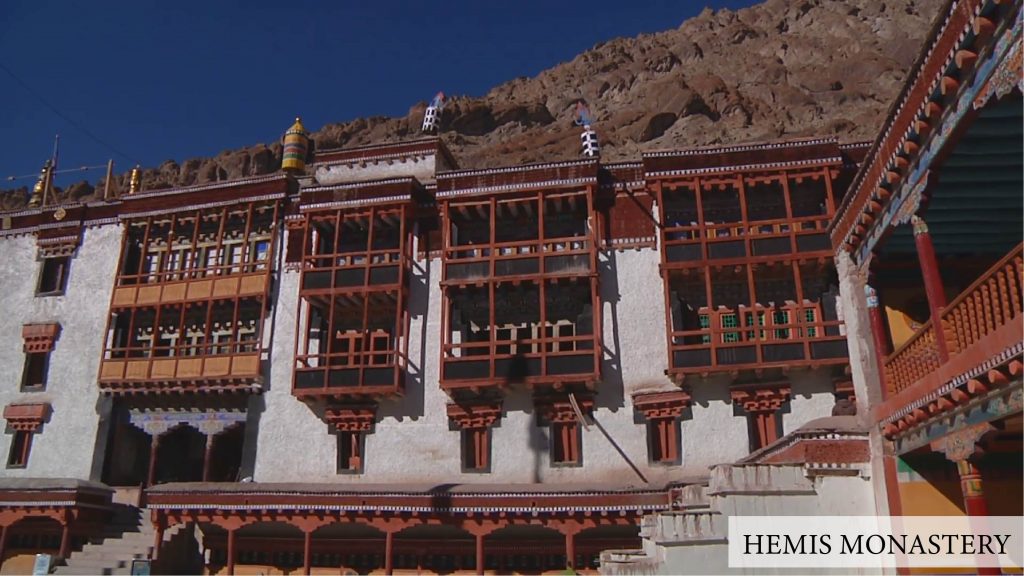 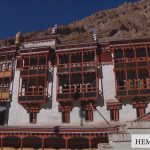 45km from Leh is the scenic town of Hemis, famous for its Buddhist Monastery – Hemis Gompa – built by the Ladakhi King Sengge Namgyal. The significance of this monastery extends to its inclusion in the seven wonders of India and a World Heritage Site in India.

A major tourist attraction, it is known for its scenic mountain view by the banks of the river Indus and the incredible mountain range around it.

With copper, gold and silver statues of Lord Buddha, Hemis Monastery stands to be one of the wealthiest monasteries in the country. You can visit and admire the vibrant Buddhist kaalchakra paintings on its walls. It also has thangkas – painting of Buddhist deities on cotton or silk – and murals on display. Hemis belongs to the Drukpa Lineage or Red Hat Sect of Tibetan Buddhism. The Buddhist flags don all sides of the monastery, sending out prayers and wishes to Lord Buddha. You can also learn Tantric Vajrayana at Hemis Gompa.

The home of the Buddhist nuns, Chomoling, is located just below the Hemis Gompa. This place too is home to magnificent scenic valley beauty. Every year a 2-day festival is celebrated in June/July that attracts tourists and locals alike. It is of major interest to both Buddhist spiritual followers and travellers. The festival is dedicated to Lord Padmasambhav, a preacher of peace and spirituality. The highlight of the Hemis festival is the Chham Dance that depicts the win of good over evil.

The monastery is said to have existed before the 11th century. Hemis is of immense significance for the Kagyu lineage of Buddhism due to the arrival of their founding father, Naropa, after the sacking of Nalanda by Turkish and Muslim forces in the 11th century. Naropa, with his teacher, Tilopa, settled in Hemis and established the Hemis Gompa. And after his founding of the Kagyu Lineage, Hemis became the center of the sect.

Manuscripts of Naropa’s biography were found in the monastery, some contents of which state Naropa’s meeting with his tantric teacher, Tilopa, who ordered 12 tasks to be done by Naropa that would bring him enlightenment.

For several centuries, the monastery was forgotten until 1630 when Satgsang Raspa Nawang Gyatso founded it again to have it re-established by Ladakhi King Sengge Namgyal in 1672.

With His Holiness the Gyalwang Drukpa as the supreme spiritual head of the sect, the Hemis Gompa is owned by the Drukpa Lineage, also known as the Dragon Order of Mahayana Buddhism.

The rich history of the Hemis Gompa has legends lurking in every period of time. One of them is related to a Christain gospel discovered at the Hemis Gompa in the 19th century. The gospel, stating Jesus Christ’s stay in India to study to become a rabbi, was later declared a hoax. Nevertheless, a few believers of the gospel still remain.

The Hemis monastery is located on a huge rocky hill with a view of the river Indus and the majestic Himalayan ranges. The architecture is inspired by Tibetan culture with vibrant hues and detailed art. You can experience the lush landscapes around the monastery, mixed with a few man-made structures. The monastery is divided into two maze-like parts – the assembly hall and the main temple, Dukhang and Tshogkhang, respectively.

When you enter through the main big gate, you are welcomed by the rectangular courtyard. This is where all the events take place. The walls are painted serene white and the ambience is spectacular as ever. With two raised platforms and a sacred pole in the centre, the place is open for a large space that can be occupied for functions. A dais with soft cushioning and a Tibetan table for ceremonial purposes can also be found. Items like incense sticks, holy water and uncooked rice are placed on the table.

Decorated gold statues can also be found in the monastery with paintings of religious figures. The statues are decorated with precious stones and are of immense religious value. A special collection of paintings, known as thankas, is only surfaced once every 11 years during the Hemis festival. The staircase leads to the north side of the monastery where the two assembly halls are present. The wheel of life and guardian deities is also present where the library of religious books can be found.

The Hemis Festival is a celebration of Guru Rinpoche, better known as the Buddhist Lord Padmasambhava. He holds high ranks in the hierarchy of Buddhist leadership. Said to have been born on the 10th day of the fifth month of the monkey year, his life’s mission was to spread spiritualism. He aimed to introduce all living beings to the powers spiritualism. The Hemis Festival is dedicated to celebrating his life’s work and continuing to spread his mission of spiritualism amongst the masses. Spiritualism, therefore, is believed to be a source of strength and good health.

Every year in June/July, for two days, the Hemis Festival takes place in the vast courtyard of the Hemis Monastery.

The cultural event in incomplete without the traditional local music. A special place for the Lamas to sit is organised. It is an event of masks. People like to dress up wearing masks at this festival. The eminent thankas have previously been showcased in 1980, 1991, 2002 and 2013. 2024 will see the next showcase.

The locals dress up in traditional Tibetan clothes with head-dresses and masks at the festival. The jewellery and clothes are elegant and vibrant. The Chaam Dance is the highlight of the event that is performed with drums, horns and cymbals. It is also performed by the Lamas. The Chaam Dance is considered sacred and of immense importance in the tantric tradition. The festival attracts a lot of tourists for different places.

The road to Hemis in itself is an adventure. It if filled with picturesque views and vast valleys all around that make the trek all the more worthwhile. Be sure to also visit the sacred hermitage of the great Gyalwa Kotsang that was established years before the monastery. This place too offers a scenic view that you can enjoy. But the view isn’t the only great thing about Hemis, the Hemis National Park near the monastery is also very famous. It holds the record for the highest National Park in the country and is best known for its snow leopards.

The months from May to September are the most favoured for a trek and tour trip to Hemis. The weather is not very cold and is rather pleasant. The snowfall from November to April shuts down the trekking tours.

You can take your pick from luxury and budget hotels for staying near the Hemis Monastery. The Monastery itself also provides overnight accommodation that you can opt for. If you choose to stay at the Monastery, you will also be provided with food options.

Both Indian and Tibetan cuisine restaurants can be found near the Monastery. In addition, you can also opt for the food options available at the Monastery, if you choose to stay there.

How to Reach Hemis Monastery

You can choose from either the bus or the private cars/jeeps options available for travel. The travel routes available to Hemis Monastery are the Srinagar-Leh highway or the Manali-Leh highway. The monastery is located at an hour’s drive from Leh.

Bike rides are recommended for your travel to the monastery.