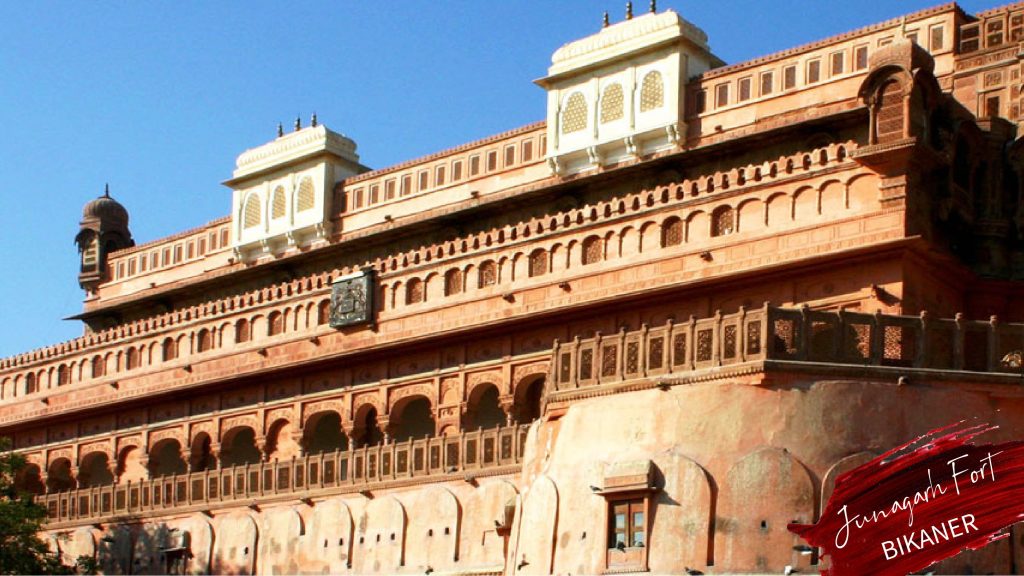 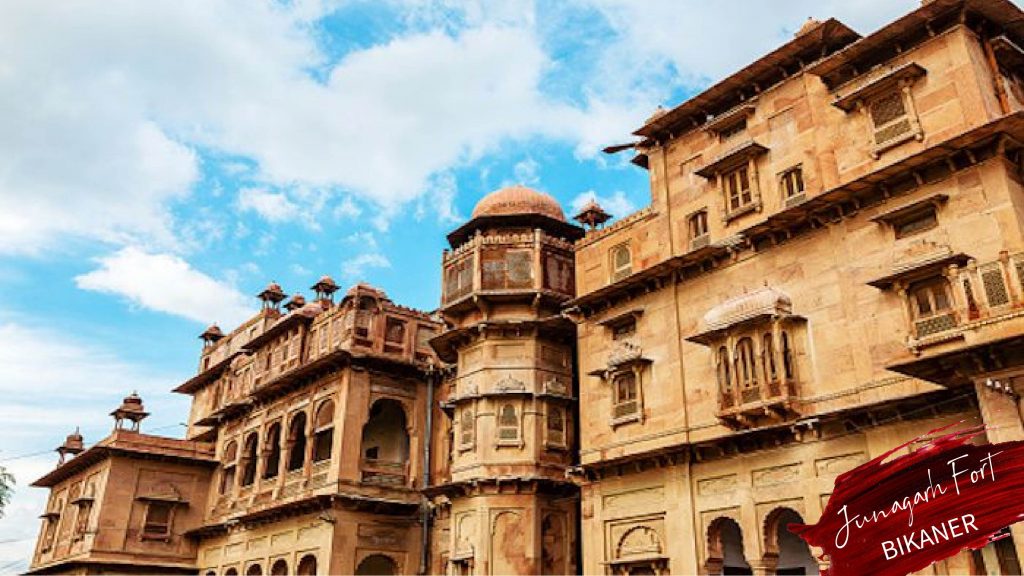 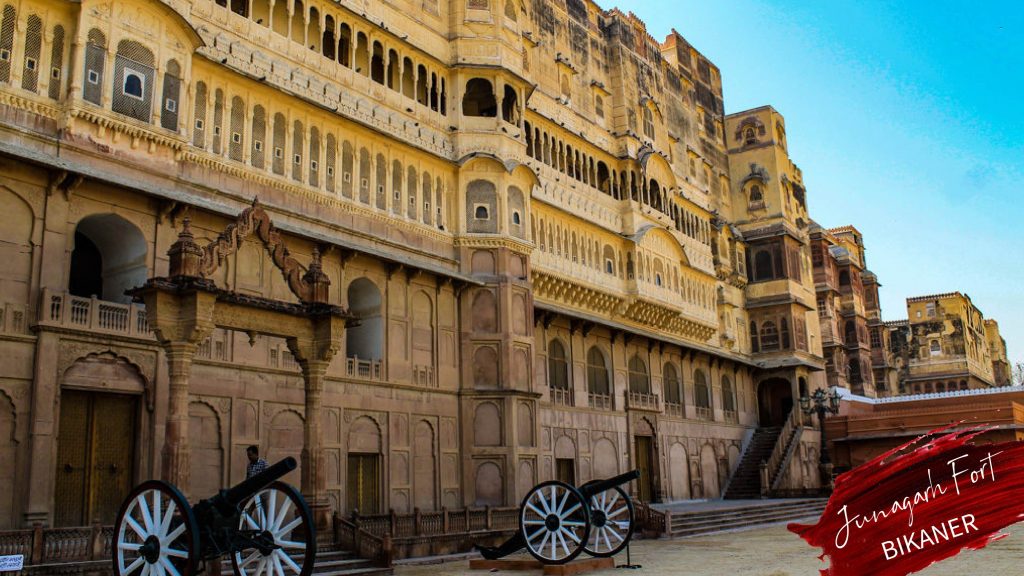 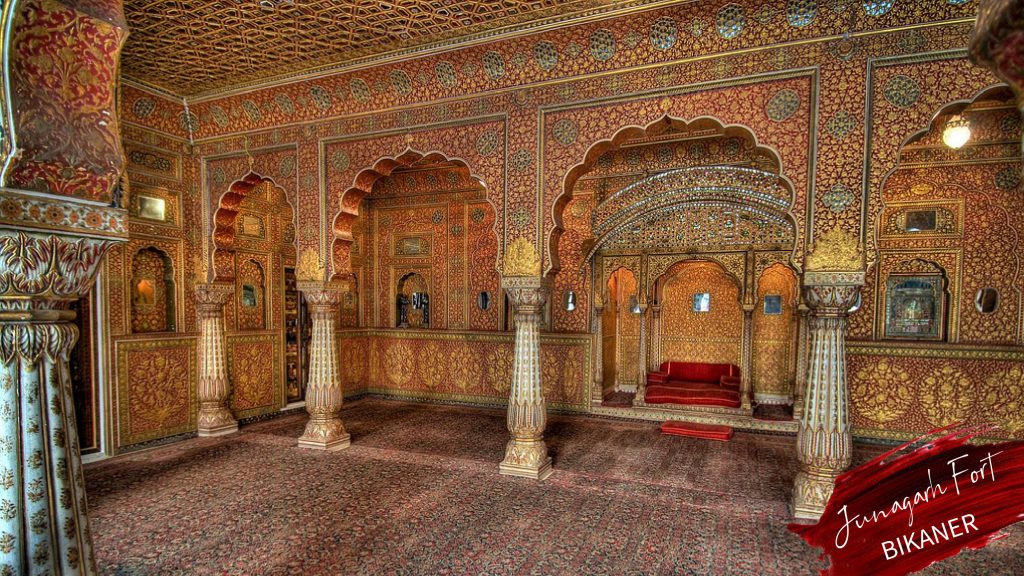 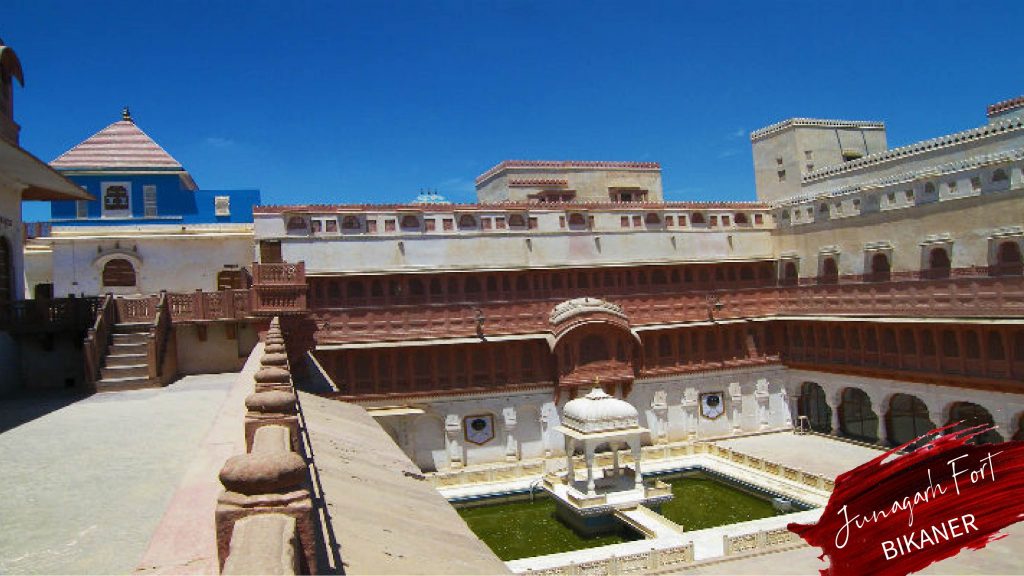 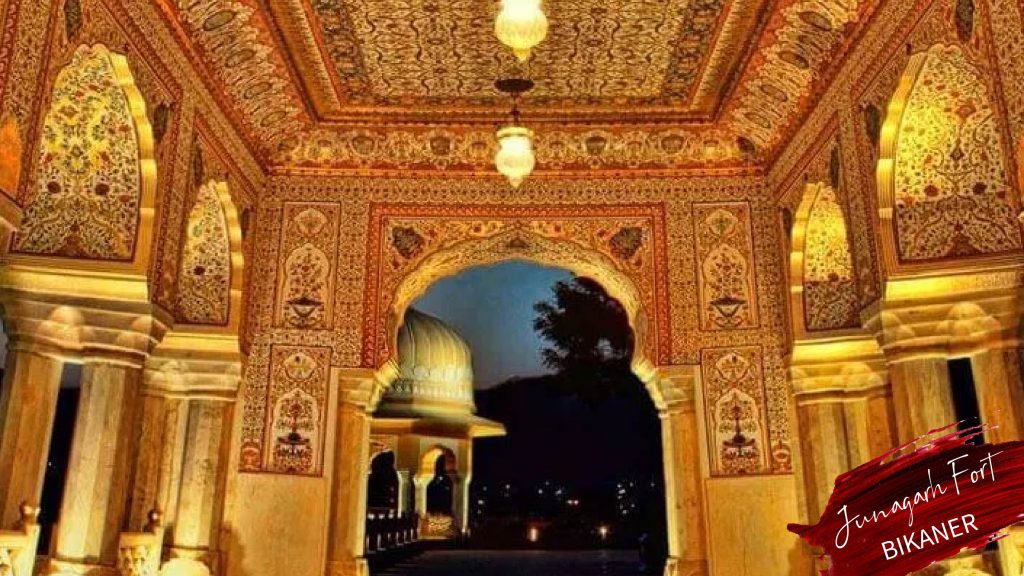 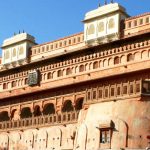 The Junagarh Fort is situated in the heartland of the city of Bikaner in Rajasthan. Initially, this fort was called Chintamani and later in the 20th century, it was renamed as Junagarh Fort. The fort was constructed in the year 1478 by the ruler Rao Bika and it was basically a stone fort. It was only by 17th Feb 1589, the present majestic structure of the fort was completed and inaugurated. The fortress is popular for its marvelous architecture and there are many beautiful gardens, kiosks, verandah within its premise. The architecture has been highly influenced by several cultures of myriad rulers of different kingdoms. The excellent structure of this fort is a treat to the sore eyes and hence, a lot of tourists visit this place throughout the year.

Initially, the architecture of Junagarh fort was based on the traditional Rajput style with a little fusion of Mughal and Gujarati architectural style as well. Later, with the invasion of Britishers, the architecture of the fort was influenced by semi-western style. The fort has been standing tall for the last 16 generations of rulers in Bikaner dated back to the 16th century. There are also many majestic monuments, Hindu temples, Mosques, Buddhist monuments, Gothic archways and beautiful monuments within the premise

The present city of Bikaner flourished around Junagarh Fort which was constructed in 1478 by the ruler Rao Bika. Initially, this fortress was constructed to protect the stone fort which was built by Rao Bika. Junagarh Fort has faced multiple assaults from several enemies and has mocked at their attempts to capture it. However, one fateful night of 1534 the fort was annexed by the Kamran Mirza, the son of Barbur.

Raja Rai Singh, who the ruler of the city then, accepted the Mughal rule and spoke high of Jahangir and Akbar. During his rule, the city of Bikaner flourished tremendously and the king won several wars for which he was adorned with jagirs and accolades. After gaining a position under the Mughal rule, Raja Rai Singh started building the Junagarh fort. Raja Rai Singh, who was an artistic person and had knowledge of architecture, designed the fort to be a grand structure in the heart of the Thar Desert.

The Junagarh Fort is a rectangular structure that stretches to a length of about 1078sq yards. It encircles an area of 63119 sq. yards and was built with the motive of protecting the stone fort constructed by Rao Bika. It used to have a trench for security purpose, however, it is now non-existential.

One of the main features of Junagarh Fort is the stone carvings engraved in red and gold sandstone. Most of the structures are built of red sandstone. The interiors are decorated with artifacts symbolizing ancient Rajasthani culture. The fortress has seven gates and out of these, two are made of golden sandstones. There are many establishments within the palaces such as Hindu and Jain Temples, Mosques, etc.

Previously, a gateway named Karan Pol was used for entry while now, the Suraj Pol is used for the same. As the sun rays kiss these gates, the gates shimmer with a golden glow and such sight should not be missed as it is also considered as a good omen.

The magnificent structures within the fort and the exquisite beauty of each structure reflects the royal culture of the bygone era. The Junagarh Fort is also known for its paradox between medieval military architecture and beautiful interior decoration.

The Junagarh fort has many beautifully sculpted palaces, buildings, and kiosks. You will be in absolute admiration once you step inside the fort.

Gates- The fort consists of seven gates. Out of these, there are two main gates – the Karan pole, the former main gate of entry and the Suraj Pol, the current main gate. The Suraj pol is made of yellow sandstone. The Suraj Pol faces eastwards, and when the sun rays touch its surface, the gate gleams with a yellowish tinge. At the mouth of this gate, two statues of elephants are fixed, which are made of red sandstone.

The other gates of the fort are Fateh Pol, Daulat Pol, and Chand Pol. The Daulat Pol has several imprints of the hands of those women who committed Sati on the funeral pyres of their husbands who died in battlefields.

Temples- The splendid fort also has several temples. The famous Har Narayan temple is devoted to Lord Lakshmi Narayan and his wife, Lakhsmi. The Ratan Behari temple is also located near Junagarh fort and is devoted to the Hindu God Krishna.

Palaces- Following places are a must-visit when at Junagarh:

1. The Phool Mahal is the oldest palace in the fort which was built by Raja Rai Singh.

2. Anup Mahal was used as the administrative headquarters of the kingdom. It is a multi-storeyed building with sophisticated designs.

3. Badal Mahal is an extension of the Anup Mahal and consists of many brilliant paintings

4.  Chandra Mahal is the most luxurious and aesthetically pleasing palace in the fort.

5. Ganga Mahal was built in the 20th century by Raja Ganga Singh. It houses a museum now.

6. Bikaneri Havelis are located both inside and outside the fort and have a unique architectural style.

7. The Karan Mahal was built by Karan Singh in 1680 to commemorate his victory over Aurangzeb.

Museum- The museum in the fort was constructed by Maharaja Dr Karni Singhji in the year 1961. The museum displays a collection of various ancient jewels, paintings, and other commemorations representing the regal lifestyle of the past.

Photography is allowed inside the fort except in the museum.

How to Reach Junagarh Fort

Junagarh Fort is located in Bikaner city near Sursagar Junagarh Fort Road. You can easily reach there by RSRTC bus, local bus or local taxi.