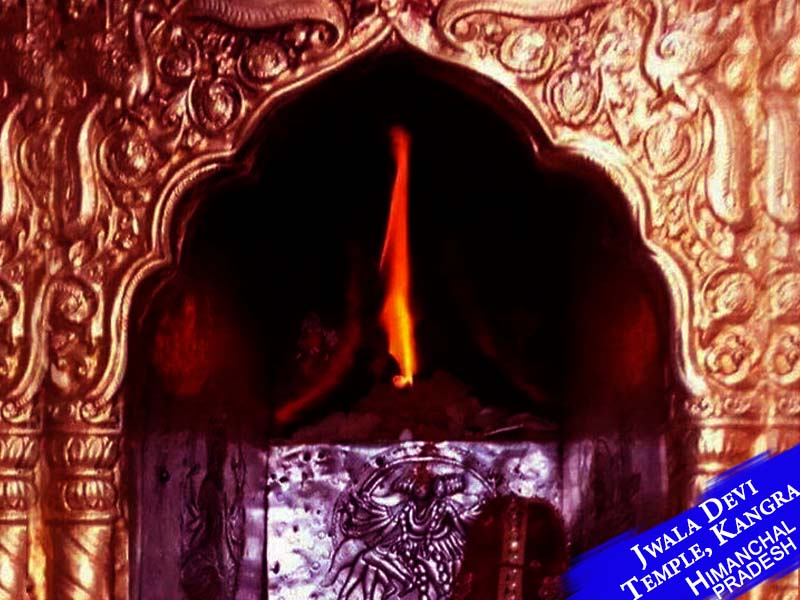 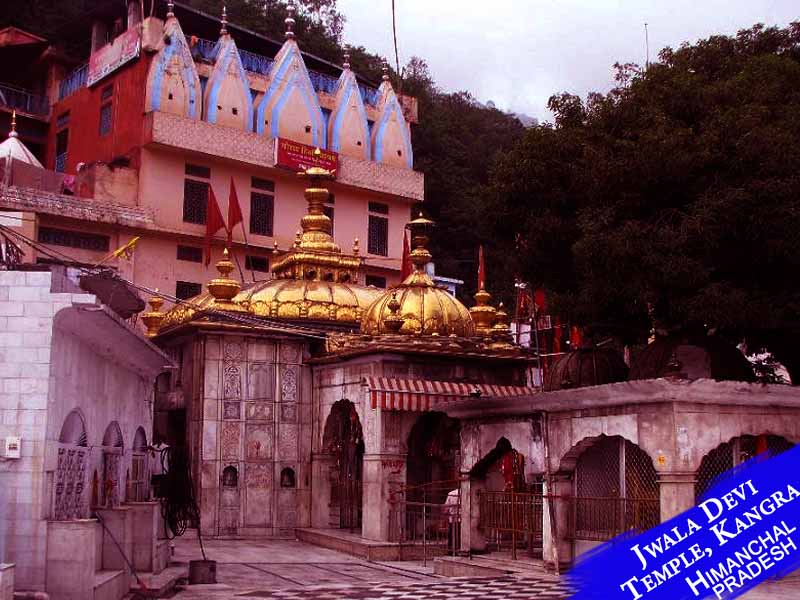 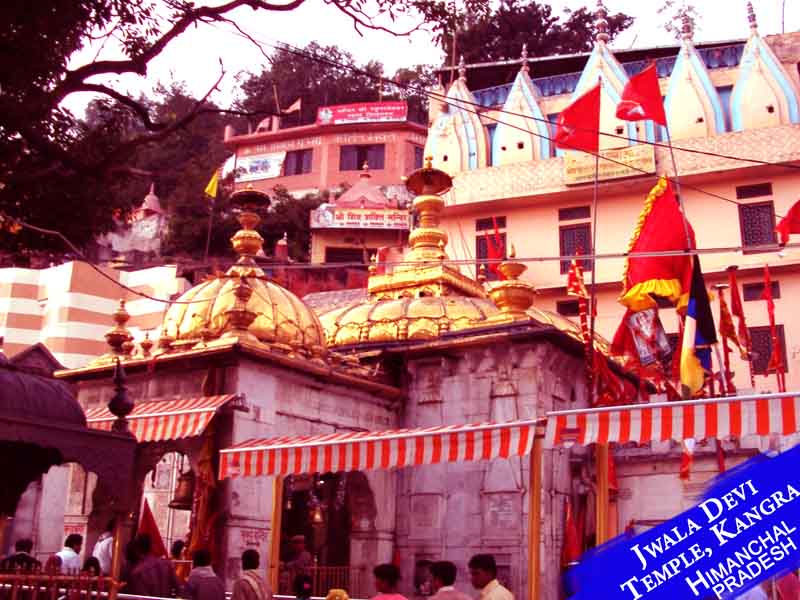 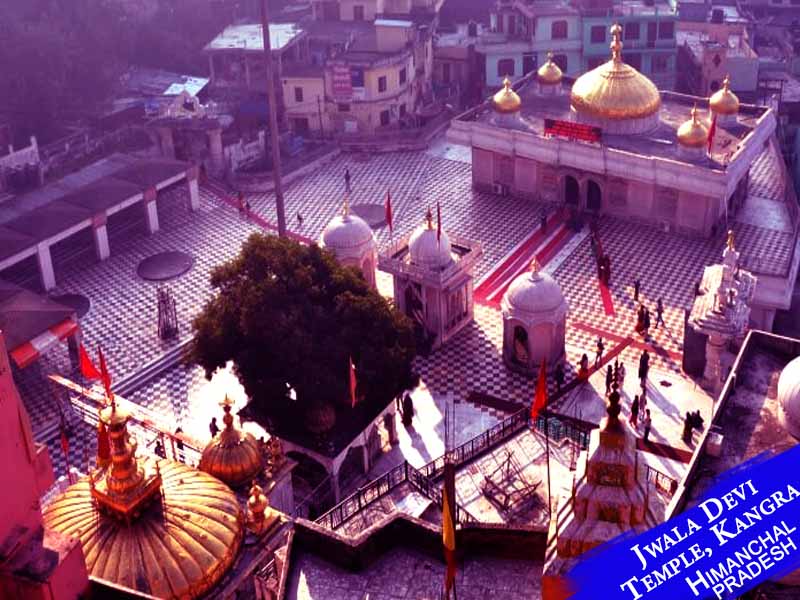 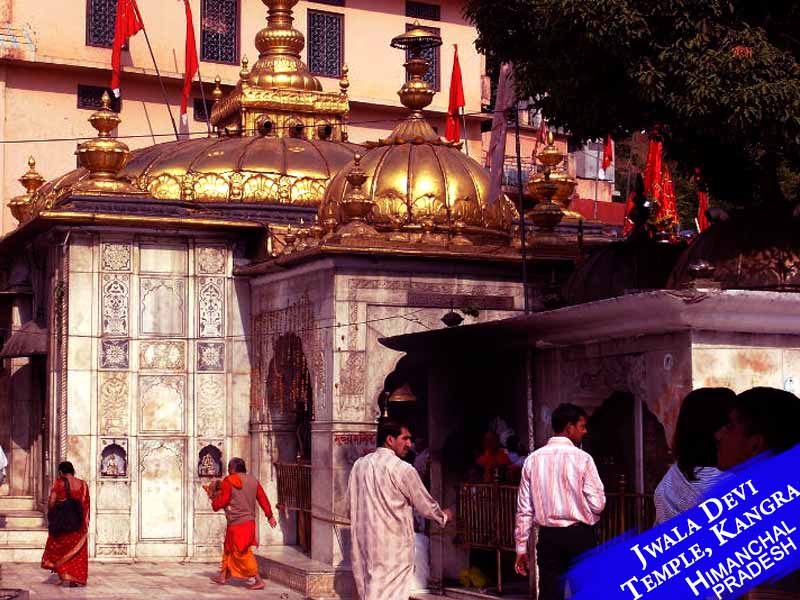 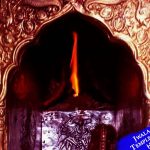 The nine eternally burning flames of Jwala Devi Mandir attract a huge number of Hindu pilgrims from all around the world. The Temple of Jwala Devi is situated in the valleys of Kangra. The temple is also known as Jwala Ji and is 34 kilometers South of Kangra in Himachal Pradesh. It is 56 kilometers away from Dharamshala. The temple worships Jwala Devi, who is an incarnation of the Holy Goddess herself. No idol of the Goddess can be found in the temple. People say she resides in the flames of the holy temple. Interestingly, the flames burn day and night without any outside fuel.

Many folktales are surrounding this temple. One of them says, Jwala Devi manifested in the form of a blue burning flame. The flame refused to extinguish even when water was thrown to it. It was believed to be an eternal flame. The shrine of the Goddess is built in an underground sanctum. A priest presents all the offering of the pilgrims and devotees to the shrine of the holy flame. Jwala Devi Temple is one of the 51 famous Shakti Peethas and pilgrims come here with the belief that all their sufferings will end with the blessings of the Holy Goddess. People say Sati’s tongue fell here when she sacrificed herself. Raja Bhumi Chand Katoch later built this temple as a memory of her sacrifice and enshrined the nine holy eternal flames. The flames are the nine incarnations of the Goddess Durga- Annapurna, Mahakali, Hinglaj, Chandi, Mahalakshmi, Vindhya Vasini, Anji Devi, Ambika, and Saraswati.

Science says the flames burn naturally from some combustible gases produced from the rocks. Though, all the true devotees believe that the Goddess herself resides in the burning flames. The aarti is the main appeal of the temple. Goddess is offered Rabri. Jwala Devi temple has been a holy Hindu pilgrimage for thousands of years. Devotees will keep visiting this temple as long as the eternal flames burn. They come here in search of happiness and peace.

More information on the temple

The Tale behind the most visited Temple

The place of worship was formed in the 19th century by Raja Bhumi Chand Katoch. According to the legends, the temple is one of Shakti Peethas because Goddess Sati’s tongue fell here when she gave up her life. To enshrine this holy sacrifice Raja Bhumi Chand constructed this temple with the help of Pandavas.

Among all other legends and folktales surrounding this temple, one is about a cowherd, who one day discovered that his one cow remains with no milk. To investigate more he kept a track of the cow to the forest and noticed a small girl emerging out of the tropical forest and consuming all the cow’s milk. He became angry and reported the incident to the Raja Bhumi Chand who sent the soldiers in the forest to look for the girl. Somehow the king believed the girl is the incarnation of the Goddess Sati whose tongue has fallen on the sacred forest. It was a few years later that the timeless flames were noticed in the mountain and Raja Bhumi Chand constructed the temple around the burning flames and gave it the name of Jwala Devi Temple. People also say, Pandavas visited the holy place and refurbished it. The popular folksong “Panjan Panjan Pandavan Tera Bhawan Banaya” is evidence to this certainty.

Akbar the Mughal emperor tried to turn off the flame numerous times but the flame continued burning in its eternal glory. People say when Akbar went to the temple to pay respect to the Goddess and presented an umbrella made of gold, the gold converted into an unidentified metal signifying the refusal of his offerings by the Goddess. Falling amongst the 51 Shakti Peethas, the Jwala Devi temple has a huge religious and historical significance.

The Structural Design of the Holy Place

The temple of Jwala Devi resembles Indian and Sikh style architecture. The temple has four corners and also has a small cupola on the apex. The platform of the temple is purely made of wood. In the central four squared pit, the flames burn day and night. Offerings and flowers are kept in the rock bottom facing the flames. The temple’s spire and the dome are coated with gold. These were presented by Maharaja Ranjit Singh. The main door of the temple is also covered with silver. This was gifted by the son of Maharaja Ranjit Singh, Maharaja Kharak Singh. The king of Nepal gifted the bell made of brass which is placed before the shrine.

The temple appears mesmerizing with its silver doors and golden dome. They glitter as the sun rays fall upon them amidst the adjoining foliage. The architectural design and the elegance of the Jwala Devi Temple attract visitors from all over the world. Even for people who are not interested in the religious aspect, the temple itself holds a lot of other things worth observing.

The aarti done by the main priest of the temple is worth watching. It is one of the main attractions here. One havan and five aartis are performed here during the day time. All the devotees offer flower, rabri, chunri, misri, milk, and fruits as a sign of their devotion. The eternal flames are considered as a holy spectacle for the devotees. There are several other shrines in the temple complex including Chaturbhuj and Gorkha Debbi temple. The temple is situated beside a cliff so the view from the temple is breathtaking and pious.

Best Time to Visit the place of worship

Beautiful fairs are held in the months of September- October, and March- April. Navaratri is also celebrated here grandly attracting devotees from all over the world. Visiting the temple during these times is usually suggested to the tourists.

Arriving the Temple of Jwala Devi

Buses are available to the temple from Kangra. People can also hire cabs to reach the Jwala Devi Temple. 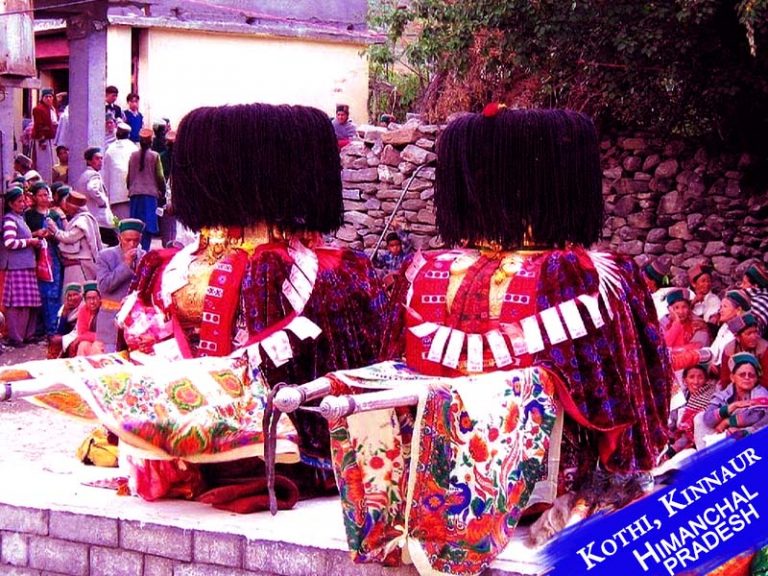