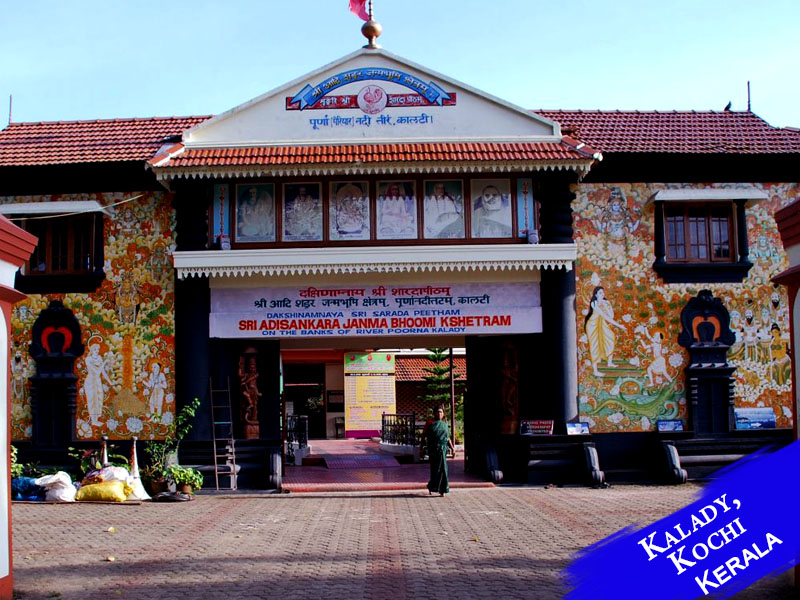 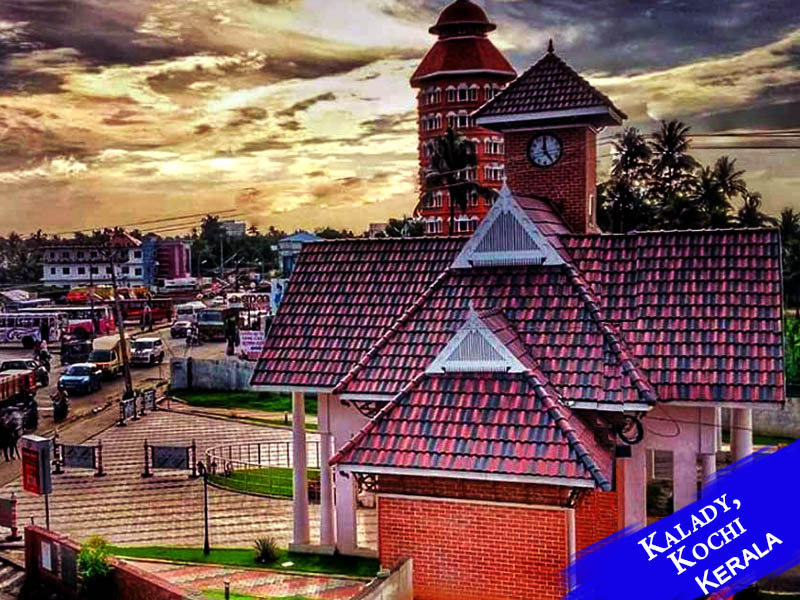 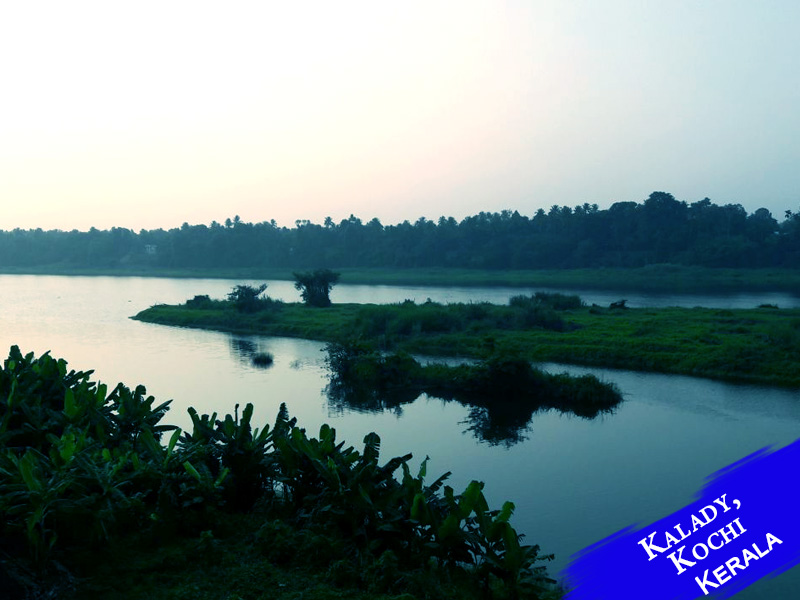 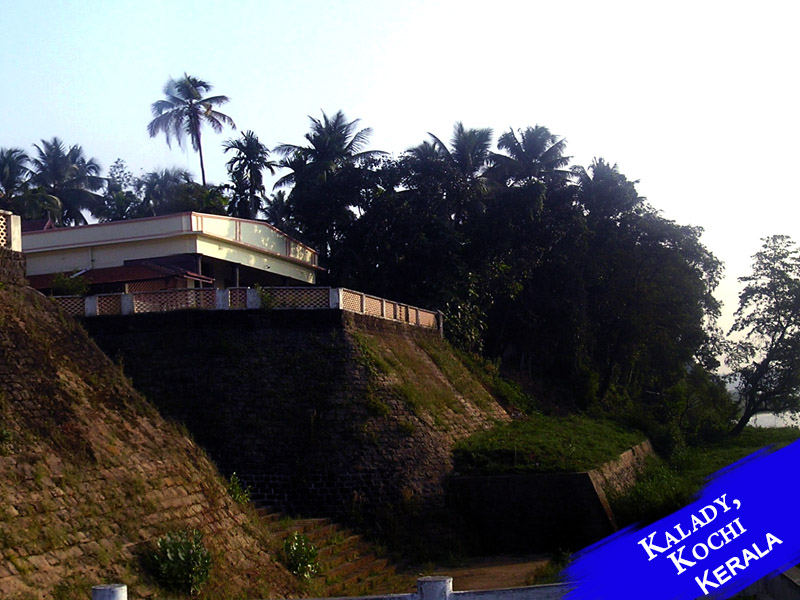 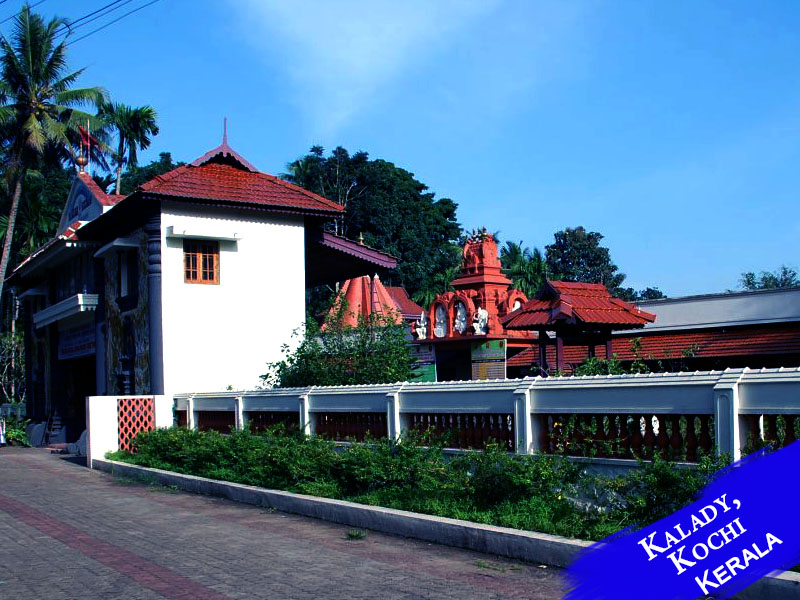 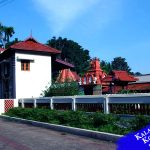 Kerala, the land of exquisite natural beauty and age-old cultural heritage, is also the birthplace of some great thinkers and philosophers whose words and deeds have been passed through generations. One of the prominent philosophers and theologians named Adi Shankaracharya was born in the town of Kalady, making it a popular pilgrimage destination. This place is quite popular for the memories and trails left due to the influence of Adi Shankaracharya and his teaching and preaching about Advaita Vedanta. That’s the reason it has been considered as knowledge and cultural hub for so long. Kalady has two important shrines commemorating the memory of Adi Shankaracharya. Out of these two, one is dedicated to him as Dakshinamoorthi whereas the other one is dedicated to goddesses Sharada(or Sarasvati, the goddess of wisdom).

Adi Shankaracharya was the only son of Sivaguru and Aryamba. At an early age of 16, he completed the study of Vedas and got a strong hold on them. With a strenuous effort, he popularized the Vedantic principles, which are the core philosophy behind Hinduism.

Kalady is considered as a land of temples as it is surrounded by many temples, namely Sri Krishna Temple, Manickamangalam temple, Sri Adi Sankara Keerthi Mandapam and many more. If you ever choose Kalady as a religious or pilgrimage destination, it will give you the best memorable experience. You can feel a unique and soul soothing ambience once you landed on Kalady. You will get overwhelmed by the positive vibe and utter devotional spirit of tourists and pilgrims.

The ancient name of Kalady was Sasalam. There is a nice little story behind how the name Kalady came into existence. Once the mother of Adi Shankaracharya was returning home after finishing her daily bath in the Poorna River. Due to a 3 km long walking path, she fainted on her way. Worried about this situation, the young Shankaracharya asked his venerated god, Lord Krishna, to help to shorten the distance. Lord Krishna got overwhelmed by the prayer of devotee Shankaracharya and blessed him with a power to mark the place with his little feet where he wanted the river to flow. Shankaracharya put his feet in place, and the now known Periyar River started its course following his footsteps. That is how the name of the place changed to Kalady, which means “Feet”.

There is this belief that this place was founded by a chieftain named Rajasekara. Being an avid follower of Lord Shiva, he built a Shiva temple and provided accommodation for Brahmins. Kanchi Mutt, under the guidance of Chandrasekarendra Saraswati, built the Adi Sankara Kirti Stambh Mandapam in Kalady. It’s one of the major tourist attractions.

Kalady, being a pilgrimage hotspot, has many Ghats(riverfront steps leading to the banks of the River) for performing different religious rituals.

The Legendary Ghats in Kalady

Kalady was born on the banks of this Ghat where the river took its turn.Here, Shankaracharya performed Aaraattu of his ancestral deity. On the festive occasion of Sri Krishna Temple, Aaraattu is done at this ghat of Kalady Kadavu.

It is the place where Sankara took the oath of celibacy. At first, his mother was not happy due to his decision. But one day, while taking a bath at the Ghat of Poorna, he was caught by a crocodile, and he used this as an example to convince her mother about his decision.

Ghat of the Post-Funeral Rites of Mother Aryadevi

It is the place where Shankaracharya performed the funeral rituals of his mother. Later, this Ghat came under the premises of Sringeri Mutt compound.

This Keerthi Mandapa was built by Kanchi Kamakoti Mutt to preserve the memory of Sri Adi Shankaracharya. It  is an eight storey building whose every nook and corner is ready to tell you about the tale of Shankaracharya’s legendary endeavours. You will be welcomed by two mammoth elephants statues at the entrance gate, which will then lead you to the Paduka Mandapam where you can see the wooden sandals called Kathau or Paduka of Shankaracharya.

This temple is dedicated to Goddess Durga. There is a story attached to the temple. Once the temple priest, Sivaguru, was unable to go to offer milk to Goddess Durga. Instead, he sent the young Shankarayacharya. While offering the milk to the idol of Goddess Durga, Sankara noticed no change in the amount of milk. He burst with tears thinking that Devi Durga was not receiving his offering. Looking at the innocence and devotion of Sankara, goddess Durga appeared and accepted his offering.

This is a Shiva temple where Shankaracharya started praying to get the blessing of Lord Vishnu. As he finished his prayer, both the deities, Lord Shiva and Lord Vishnu started inhabiting in the statue of the temple. That’s the reason why after the offering is made for Lord Shiva, another offering begins for Lord Vishnu.

This is the place dedicated to the mother of Shankaracharya, Aryadevi. This is where she was cremated, and for the serenity of her soul, lamps are lit by Kapilly Mana(the family assisted in cremation) every day.

To commemorate the legacy and contribution of Shankaracharya to this land of Vedas and Upanishadas, Sankara Jayanti is celebrated every year for five days during the month of April or May. Navratri is celebrated in Lord Shiva Temples. The popular festival dedicated to Lord Krishna is celebrated on the 6th of January every year.

How to Reach Kalady