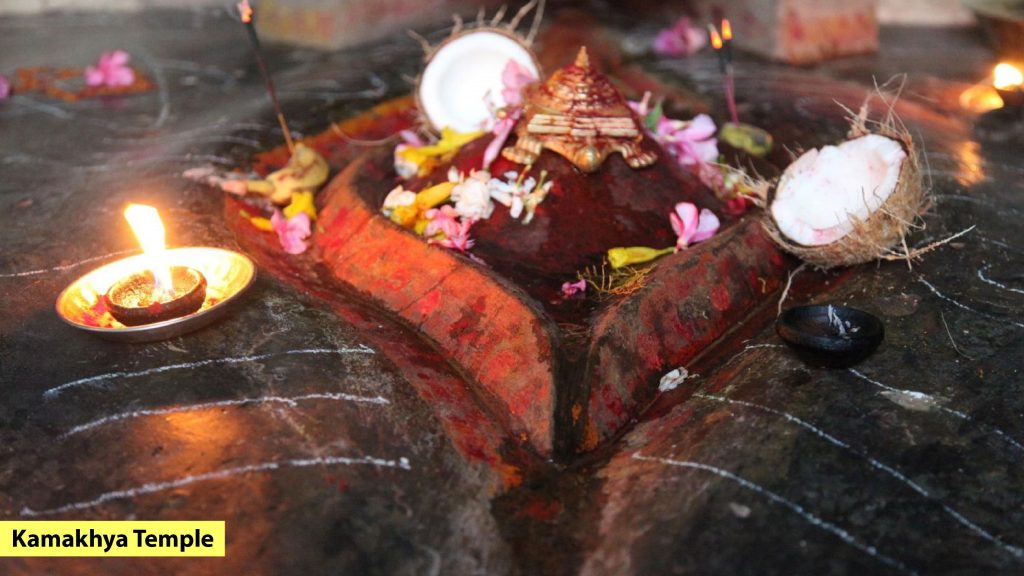 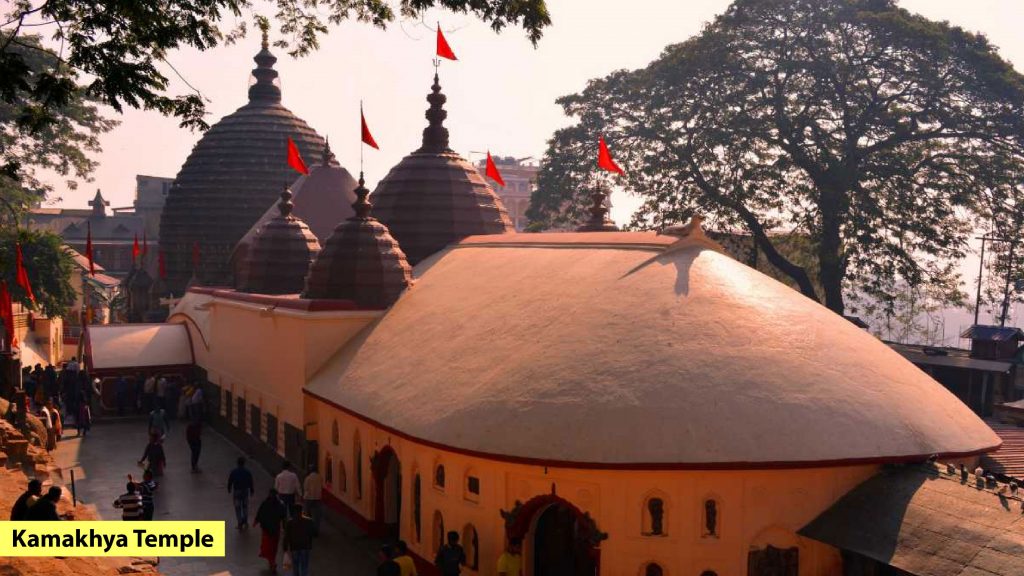 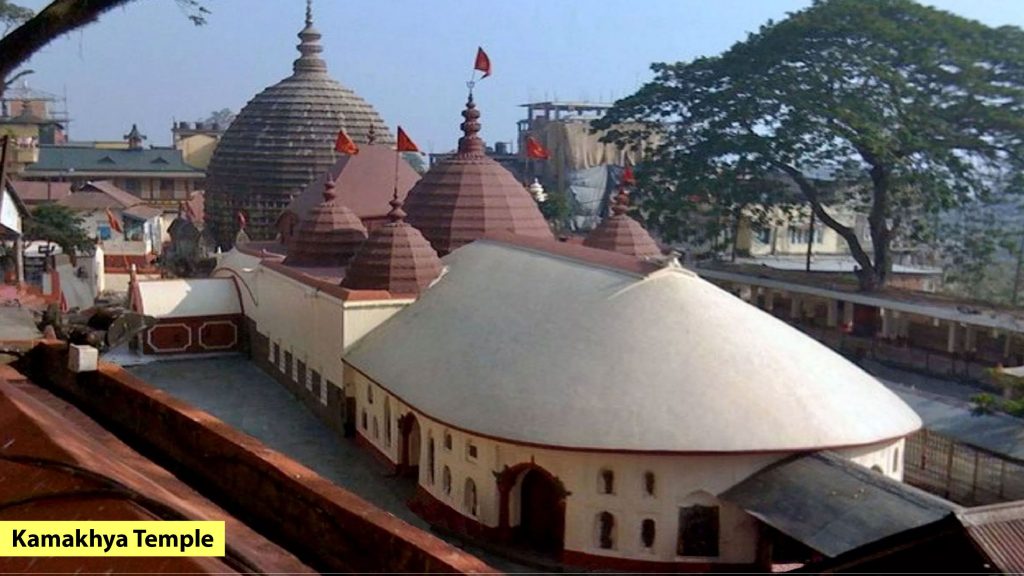 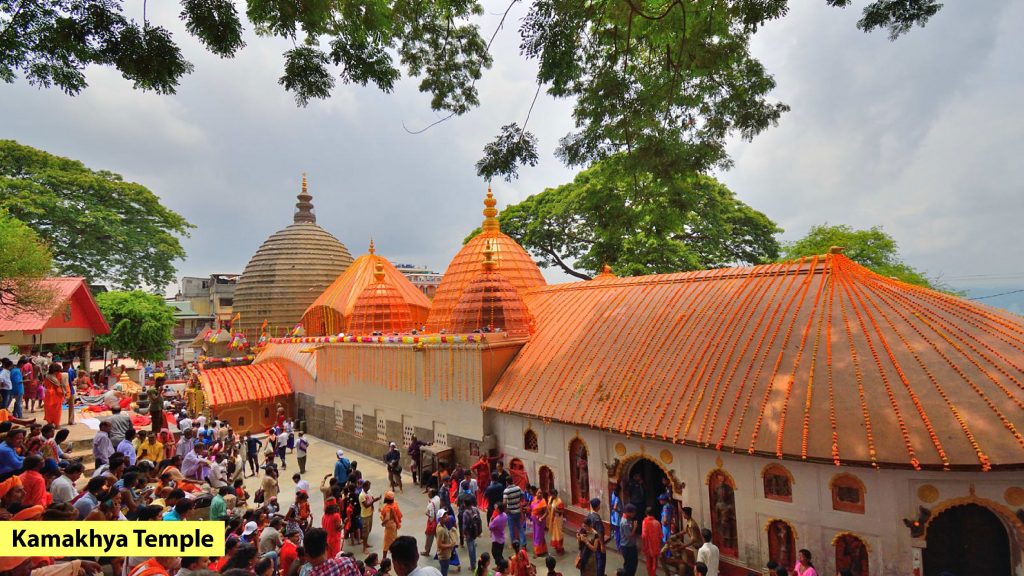 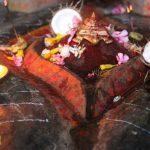 Kamakhya Temple is situated somewhere on the Nilanchal Hill which is in the western part of Guwahati in Assam State, the Kamakhya Temple happens to be one of the most highly respected shrines of Goddess Shakti in the whole of India. The Hindu scriptures states that there are four important Shakti Peethas (Temples that possess the most divinity powers) in the country and Kamakhya Temple happens to be one of them. The Kamakhya Temple is always known to celebrate the power of the fruitfulness of the female gender and as a result, it is regarded as extremely generous amongst the followers of Hinduism (Tantrik sect). The  temple was built and has been reconstructed several times between the 8th century and the 17th Centuries and it is always a beauty to behold.

The major feature of the Kamakhya temple is the fact that it is exquisitely made beautifully with a plain but lovely drawing that are beautified with colourful floral. Kamakhya temple has a very big rounded vault that overlooks the attractive Nilanchal Hills in the background. When it is time for Ambubachi Mela, It is often designed to give it a stunning beautiful look, the Mela which is usually held between 3-4 Days in the month of June.

The Ambubachi Mela festival is a celebration of the fertility of the goddess, the celebration is based on the belief that Shiva, the mother Goddess’ (Kamakhya) young bride, is menstruating hence, the reason for the celebration because it brings much fertility afterwards. On the first three days of the festival, the kamakhya Temple is usually closed and the Goddess will be properly cleaned, after those three days the main regular activities in the temple continues. The belief here is that during the monsoon when this festival is happening, the Mother Earth is at her most fertile period because the rain must have nurtured her womb which is the soil.

Activities time of the Kamakhya Temple

But on very special days, like Durga Puja, the time of activities at the temple differs as can be seen below:

8:00 AM – Temple door opens for devotees and by 1:00 PM – the Temple door is shut to enable food offerings to the goddess.

The Kamakhya Temple is one of the longest standing temples in Assam State and the whole of india, therefore, it has a very long descriptive history along with it. The temple is said to have been structured during the time of the Mleccha dynasty in the 8th – 9th century. It was during the time of the reign of Kamarupa Kings from Indra Pala to Dharma Pala. The Kamarupa Kings religiously followed the Tantrik cult. Since then the Kamakhya temple has had connotations with Tantrikism.

By the 10th century, the Kalika Purana was written. After this, the temple’s value quickly escalated and it became an important place for the sacrifices related to Tantrik ceremonies. There was also the emergence of Mystic Buddhism or Vajrayana around that time. Also, some Buddhist professors in Tibet were believed to be a part of Kamakhya.

During the Kamata Kingdom invasion of Hussein Sha, the temple was brought down to ruins. Since then the dome of the temple was never found until 1500s. This happened because the then Vishwasingha, the founder of Koch Dynasty ordered investigation of the ruins. In 1565, the temple was rebuilt during the reign of his son. Ever since the reconstruction, Kamakhya Temple has always been a prominent religious place

The Kamakhya temple was built again in the year 1565. This was the time when the place was under the rule of his son. The place has become a place of religious importance ever since.

Structure of the Kamakhya Temple

The recent building of the Kamakhya temple is said to be structured like the Nilachal type, which means structures that have the shape of a rounded vault  and a base shaped like a cruciform. There are four chambers in the temple and they are aligned from east to west. The descriptions are given below:

First one is the Garbhagriha: The Garbhgriha which is also the main sanctum, sits on a base that has a number of sunken panels decorated with sculptures of Ganesha and a few other Hindu deities. Stones make up the lower parts of the Garbhagriha whilst the top is shaped like an octagon and is made up of bricks. The Garbhagriha is located in an underground like style and can only be accessed by several steps cut from rocks.

The Kamakhya goddess is worshiped here and is represented by a rock fissure which has the shape of a Vulva depression. Just like other Garbhagrihas in the temple, the vulva shaped depression is filled with water coming from an underground spring.

Second chamber is the Calanta:

The Calanta is located westward of the Kamakhya temple, the Calanta is shaped in the form of a square like the atchala type. Miniature idols of Gods and Goddesses that can be moved around can be found here. On the walls of the Calanta, there are several inscriptions and images which are carved on its walls.

The third chamber is the Pancharatna:

This chamber is west towards the Calanta. The Panchratna takes the Shape of a rectangle and it also has a flat roof and five little spires that protrudes from its roof.

The fourth chamber is the Natamandir: this chamber is located westward of the Pancharatna and it is the last building of Natamandir. It has a semi circular Projection at the end and it has ridge like roof similar to theRanghar type Ahom style. On the walls of the Natamandir, there are inscriptions from Rajewas Singha and Gaurinath Singha that are written on them.

The Kamakhya Temple has always been a highly respected site for those who are strict followers of Hinduism.

It is said that the river Brahmaputra River will turn red during the month of June. The Gregorian Calendar says that June falls in the Ashadh period.

The belief is that it is divine and it happens due to the menstruation of the goddess. Some other people fault the belief and asserts that the water changes color due to the high amount of cinnabar and iron which are deposited into the water. The rest people hold their belief that the water turning to red is a divine miracle and must be celebrated. Because of the river turning to red, many people come for the annual Ambubachi Mela festival. Both the temple and the river are the major attractions of numerous devotees.

* devotees, guests and tourists are allowed to bring a camera along with them but once you are in the inner part of the shrine, you are not allowed to snap.

*Once inside the temple, orderliness must be strictly maintained and dress code adhered to.

Routes to get to Kamakhya Temple

The temple is located at the top of Nilachal Hills. To get there, you can take a taxi ride or you can hire a rickshaw from any location in Guwahati.

There is also an option of buses owned by Assam State Tourism Department which go to the temple from several locations in the city.

You can take a bus to the temple from Kachari Bus stop ran by ASTC.

The way to enter the temple is by taking two rock carved out stairs which starts from below the Nilachal Hills and takes you straight to the temple.