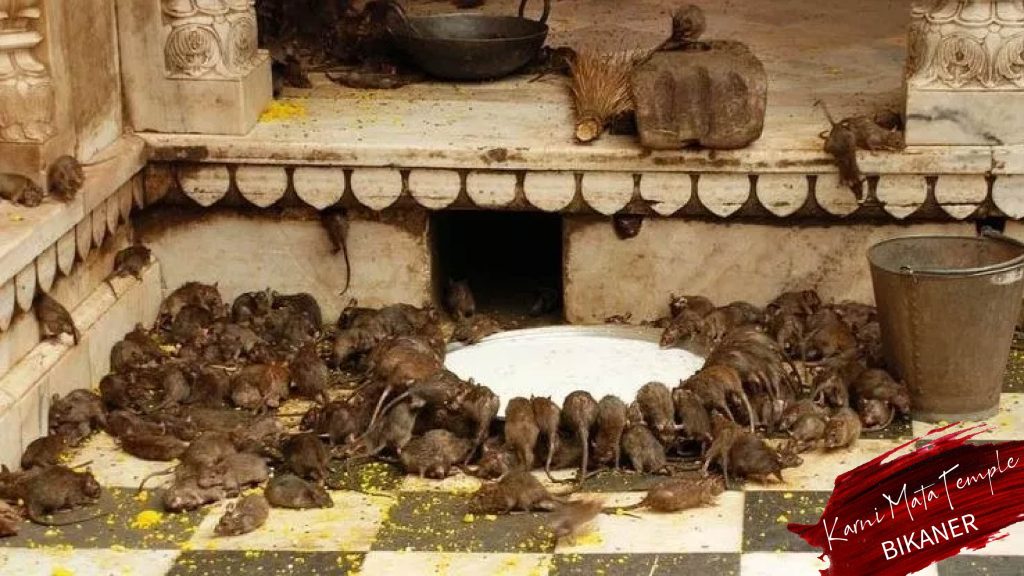 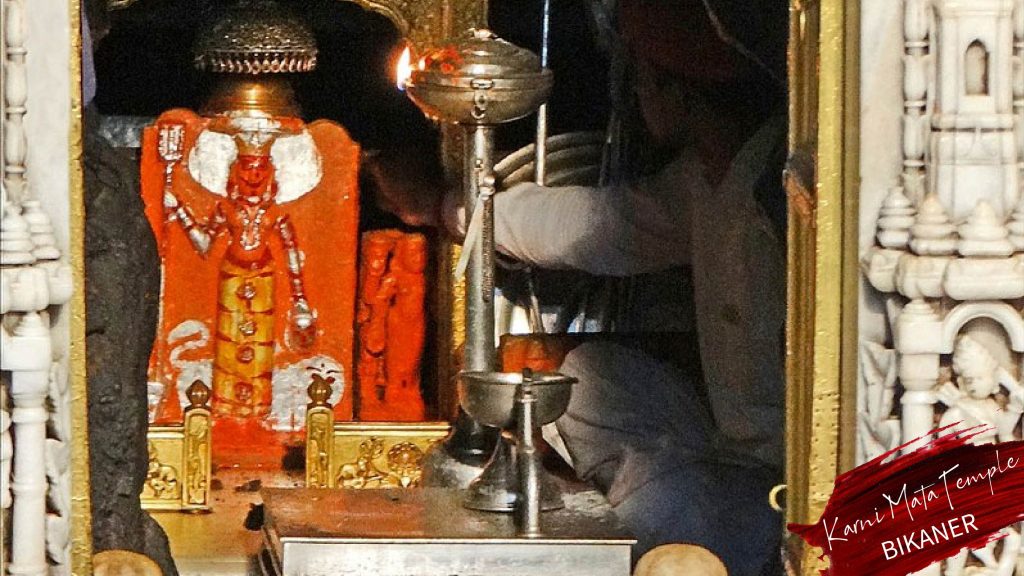 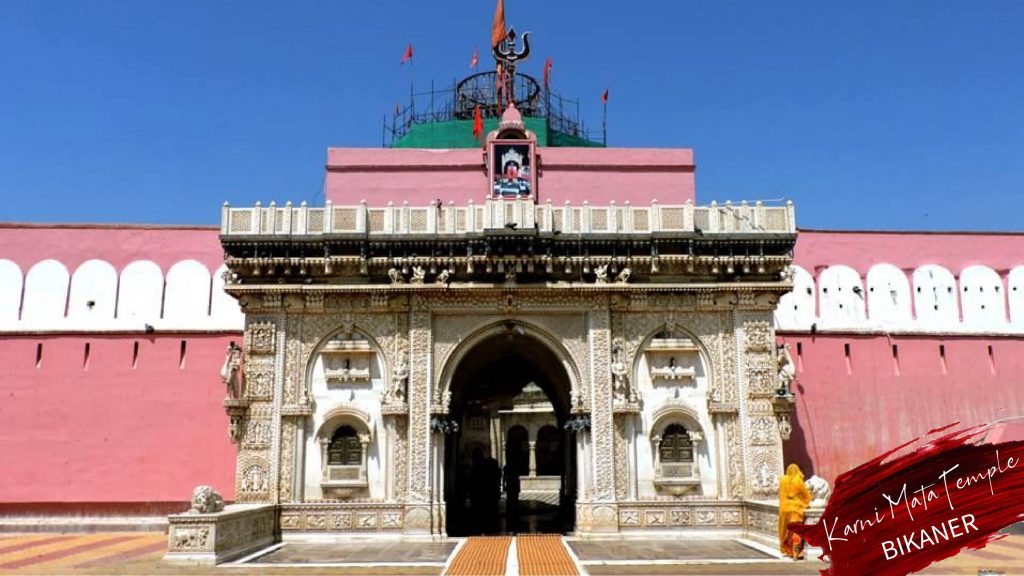 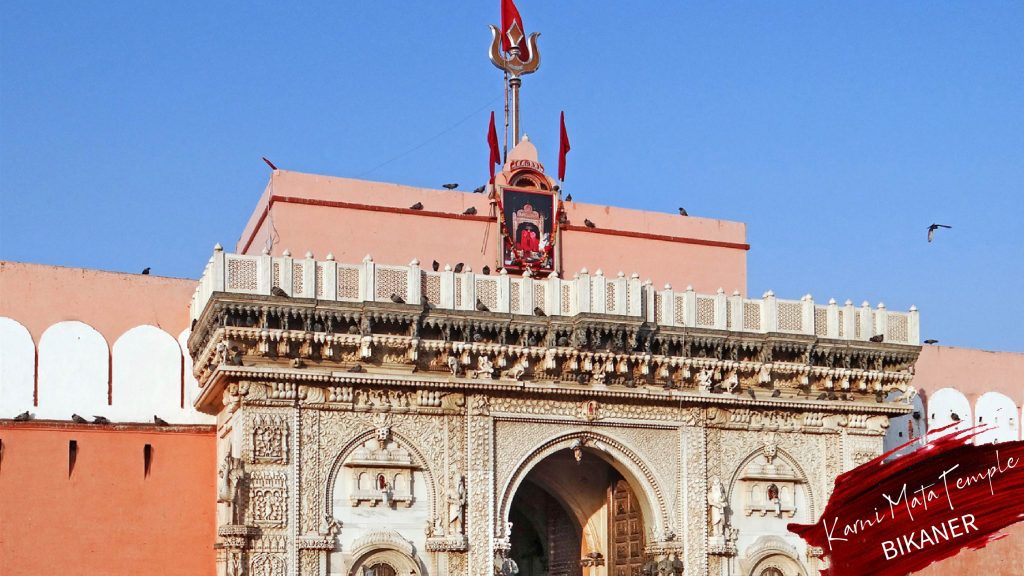 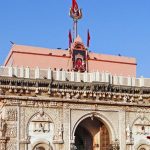 The Karni Mata Temple is a must-visit tourist spot in Bikaner. Also known as Nari Mata Temple, this shrine is devoted to Goddess Karni, who is believed to be an avatar of Goddess Durga. The legends say that the Goddess Karni laid the founding stones of two most popular forts in this city of Rajputs and several temples dedicated to her have been built across the city. The most interesting fact about this temple is that around 25,000 rats reside and are worshipped in this holy place. In particular, the food that is eaten by them is considered to be holy and is later served as ‘prasad among the devotees.

The rats are also referred to as ‘Kabbas’ and visitors from all over the world travel to this temple just to witness these holy rats. For this reason, the temple is also known as the ‘Temple of Rats’. This Hindu temple is as old as 600 years and is situated in a  township of Deshnok, which is 30 km to the South of Bikaner city in  Rajasthan.

The architecture of this temple is highly influenced by the Mughal architectural style. The front wall of the temple is made of marble which constitutes detailed carvings and patterns. As you explore the temple, you will be engulfed by its beauty and spiritual vibes that dominate the region.

Various mythological stories are formulated behind the origin of this temple. As per the most famous legend stepson of Karni Mata, Laxman, drowned in a lake named Kapil Sarovar which is situated in Kolayat Tehsil. As a mother, she got extremely worried and with sheer devotion she prayed to the god of death, Yamraj, to return her child. At outset, the Lord denied but later he was melted by witnessing the love of a mother for her child. Yamraj reincarnated Laxman and all of her male children into rats.

Another story is related to betrayal and punishment. A fleet of 20,000 army men had abandoned a nearby battle and had taken up shelter in Deshnoke. When Mata Karni came to know about their sinful act of desertion, she was determined to punish them by death. However, she spared their lives but with her magical powers transformed them into rats.

The shrine was provided to them as a place to stay and in return, the soldiers sought to serve the Goddess for their entire life. You can also spot few white rats among the grey ones and these rats are supposed to be the incarnated version of Karni Mata and her sons.

The architecture of the temple is another most fascinating thing after the rats in the temple. the temple was renovated in the 15th century by Maharaja Ganga Singh of Bikaner. He incorporated the Mughal style of architecture was reconstructing the shrine. The front end of the temple is entirely built of marble which constitutes of intricate carvings and patterns. You will be mesmerized as you lay your first glance at the temple. There are pairs of silver doors right before the main shrine of the Goddess. These doors were donated by the Maharaja Gaj Singh while his tour to this temple.

The idol of the Goddess is fixed at the shrine in the center of the complex. The diety is as tall as 75 cm and is holding a Trishul (trident). It is adorned with flowers, crowns, and garlands. The idols of her sisters are placed at the sides and the places is always filled with rats.

Rats at the Karni Mata Temple

The rats have religious importance at the temple and are considered to be a holy creature. There are around 25,000 rats that move freely around the temple. They emerge out of small holes and cracks that is formed on the walls and floor of the temple. The devotes offer them sweets, milk and other types of offerings and it is believed that the food items that are nibbled by are holy and is distributed as prasads.

Watch out for the rats as there is a heavy penalty imposed if you kill them by mistake. You will have to replace the rat with the one made of solid gold. Spotting a white rat is rare and is considered to be auspicious. People all around can be found luring the white rats out of their holes by offering them various sweets.

If you are visiting Bikaner during the months of March-April and Sept-October, you should attend the famous fair that is organized at Karni Mata Temple. The fair takes place twice a year during Navratra months. Thousands of devotees visit this temple on foot during this festive occasion.

The general public can visit the temple from 4 am to 10 pm. In the early morning, you will be greeted with Mangla ki Aarati that is performed by the Charan priests and simultaneously bhog is offered to the Goddess. There is no entry fee at the temple. You can also take pictures in the temple.

The suitable time to visit the temple is during the months when the fair is held, that is, anytime between March-April and Sept-October. However, there is no specific season to visit the temple if you want to get blessings from the Goddess and offer bhog to the diety and rats residing in the shrine.

Walk cautiously around the temple premises as you might step on the rats which are considered to be religious.

How to Reach Karni Mata Temple

The temple is easily accessible by road as it is situated on the NH 89. It is around 30 km away from Bikaner city and is well connected by both private and state bus services. You can also hire a taxi from any parts of Rajasthan to reach this shrine.