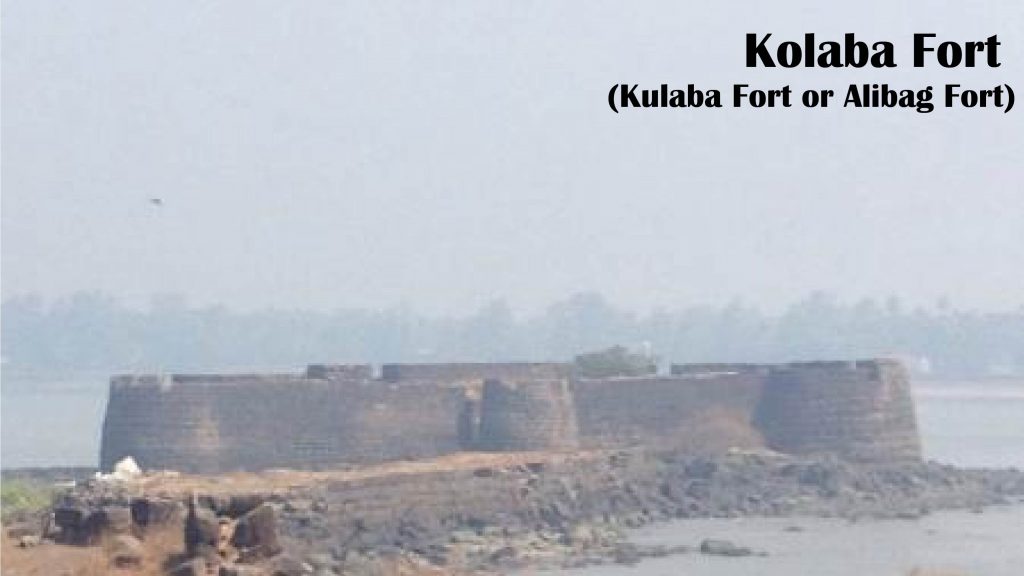 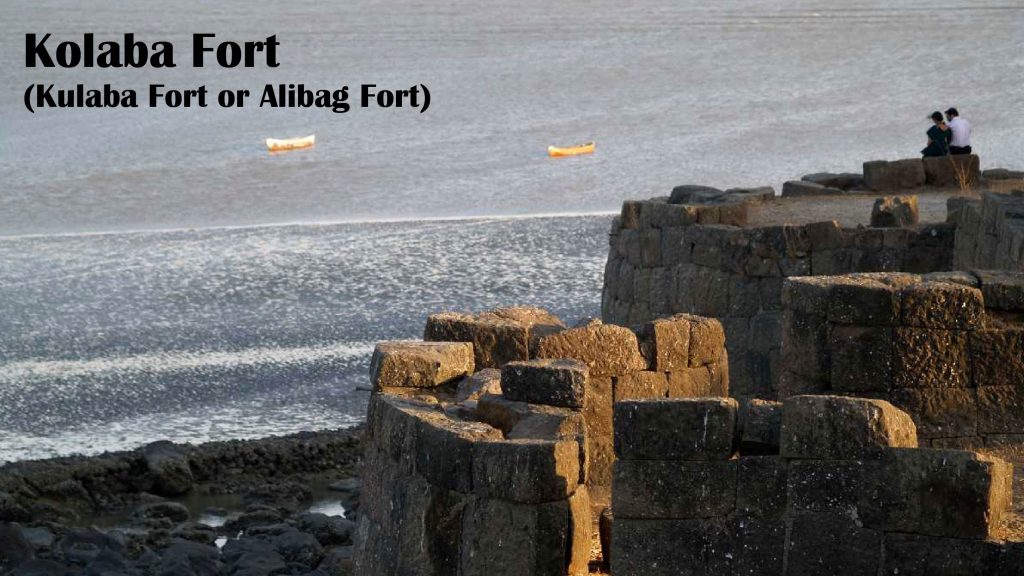 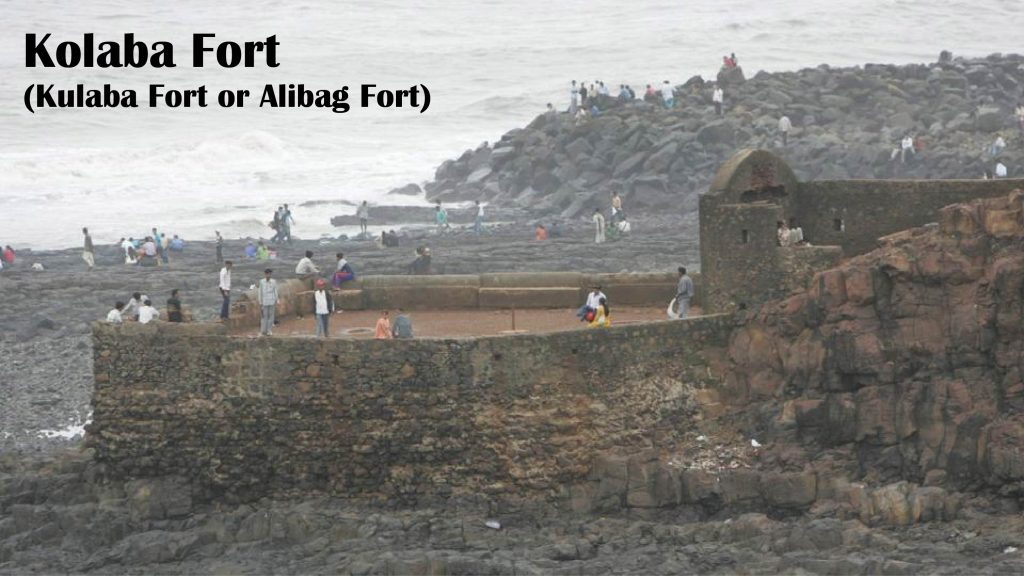 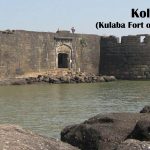 Kolaba Fort, also known as Alibaug Fort, is located amidst the Arabian Sea and is surrounded by water on all sides. This marvellous structure is located 2 km away from Alibaug beach and can be reached by foot during low tides and by boat during high tides. The walk to this fort is exciting and the scenic view of the sea is mesmerizing.  This fortress is 300 years old and used to be one of the most important naval stations during the reign of Shivaji Maharaj.

This military fortification houses many interesting artefacts and remnants of the past including canons and weapons. The walls of the fort are embellished with intricate carvings of birds and animals. There are also ancient temples situated within the premises of this fort including the famous Lord Ganesha Temple which was constructed in 1759 by Raghoji Angre. This temple is still worshipped by the local fishermen for their safety and business prosperity. One of the fascinating facts about this temple is that despite being surrounded by salty water of the sea on all sides, there is freshwater well within the fort premises.

Kolaba Fort is recognized as a monument of historical significance by Archaeological Survey of India (ASI) and is one of the most prominent forts in Maharashtra. In the past, the fort was used by the Maratha Empire to launch attacks on the British army. The scenic beauty combined with rich history makes this fort the most visited tourist spots in the Konkan region.

The fort stands tall at a height if 25 feet and has many Hindu temples within its complex. These temples are now used by locals for worshipping and other religious purposes. Freshwater well is also situated inside the fort and is still an important source of water supply.

After the fort was annexed by Kanjhoji Agre, who was the chief of Maratha Navy, it was widely used to attack the British ships during the independence movement of 1700. Given its location, the fort became strategically important to the Marathas to carry out attacks on the British forces.

After the demise of Kanhoji in the year 1729, a fire broke out in Pinjarra Bastion which burned down and scarred various establishments within the fort. The fortress was later taken over by British in the year 1842.

The Kolaba Fort served as a military fortification for many years for both Maratha Empire and western power including East India Company and Portuguese. The fort was annexed by Shivaji in the 17th century, right before his demise in 1680.

Various other monuments inside the fort were constructed by Sambhaji Maharaja who was the son Shivaji. Two sardars of Shivaji’s army namely Manik Bhandari and Darya Sagar were given the authority to supervise the fort. The fortress was soon captured by the chief of Maratha Navy, Kanhoji Angre in 1713. He took in-charge of the fort until his death in 1729.

The most interesting historical fact about this fort is the battle of 1721 which was fought between the Marathas and the British forces. The Portuguese and British armies conspired to launch an attack on the fort but were met with defeat. The Kolaba Fort once housed gardens, stables, treasuries and other buildings, most of which were destroyed during fires that broke out in Pinjarra Bastion.

Things to See at Kolaba Fort

Situated near to the shores of  Alibaug, the Kolaba Fort offers a picturesque view of the Arabian Sea over the Horizon. You can sit back and enjoy the sunset. You will be mesmerized as the sky glows with different hues of orange during the sunset. The cool sea breeze and the calm ambience with the magnificent fort in the backdrop will leave you in awe. The grandeur structure of the fort is indeed a perfect illustration of exceptional craftsmanship and engineering of the bygone era.

Your attention will be grasped by the beautiful wall carvings of peacock, tigers, birds, and elephants. The fort also houses a few cannons that were used in the epic battles of the past. Despite positioned in the middle of the sea,  you will be taken aback to witness a freshwater well here.

For those looking for religious places around, the fort has few of Hindu temples within its premises. The famous Siddhivinayak Temple which was built by Raghoji Angre in 1759, is also situated here. The other notable temples in the fort are Padmavati Temple and Mahishasura. In addition to the Hindu temples, there is also a dargah of Haji Kamaluddin Shah within the fort complex.

The ideal time to visit Kolaba Fort is during the months of November-July. The monsoon season brings a lot of rain and hence, it might not be a wise decision to plan a trip to this fort around this season.

1. Kolaba Fort is situated at a walking distance from the shore; however, the route gets submerged during high tides and can be reached only via boat. Hence, it is advisable to plan your trip as per the timings of high and low tides.

2. You can hire horse carts to explore the beach in a fun-filled and unique way.

How to Reach Kolaba fort

The Kolaba Fort is easily accessible by ferry services from Mumbai and is situated at a distance of 35 km. The ferry services are available from Gateway of India in Mumbai. The nearest jetties in Alibaug are in Rewas and Mandwa. It takes around 45 mins to reach Alibaug by ferry and the services are operational throughout the day.

Mumbai is the nearest major city and is approximately 100 kilometres by road. Alibaug is well-connected with both state and private bus services from cities such as Pune, Mumbai, Kolhapur, and Nashik. The nearest railway station is at Pen which is 30 kilometres away. The local transport such as auto-rickshaws, taxis, etc is readily available in Alibaug. Once you reach Alibaug beach, you can either walk to the fort during low tides or hire a boat during high tides.