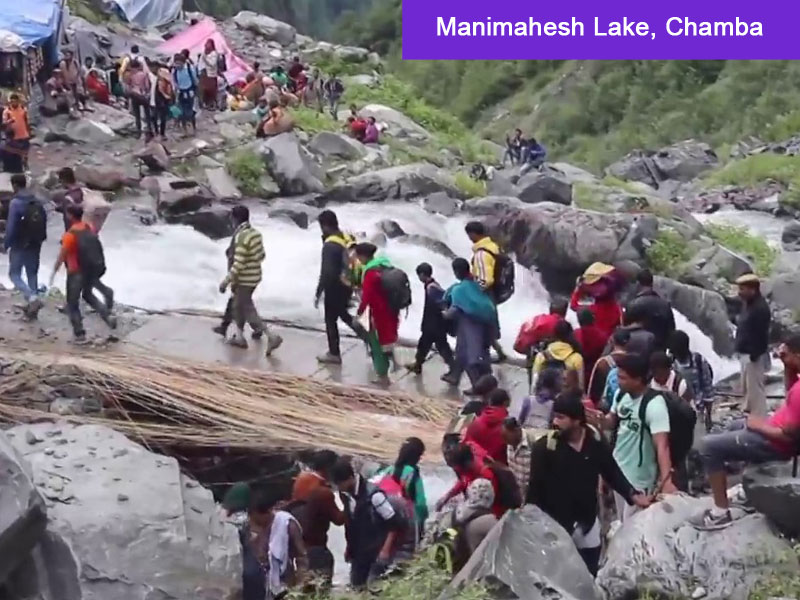 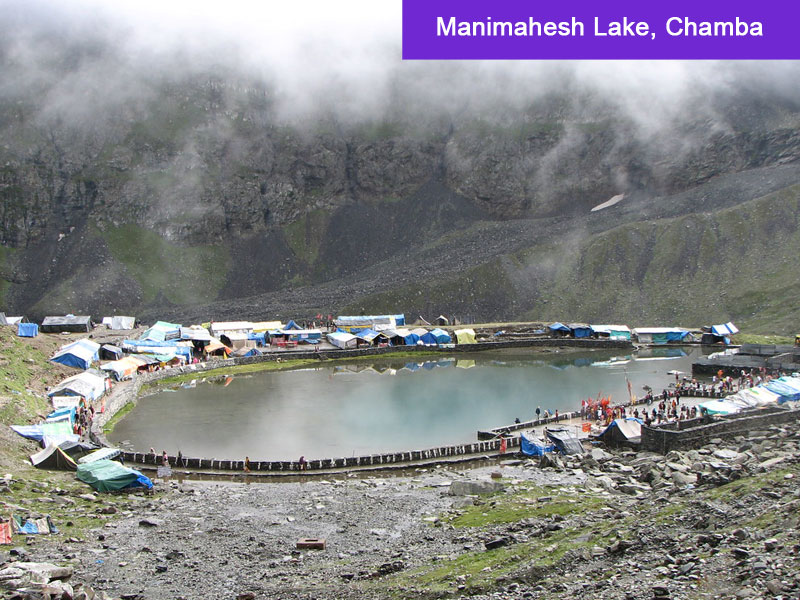 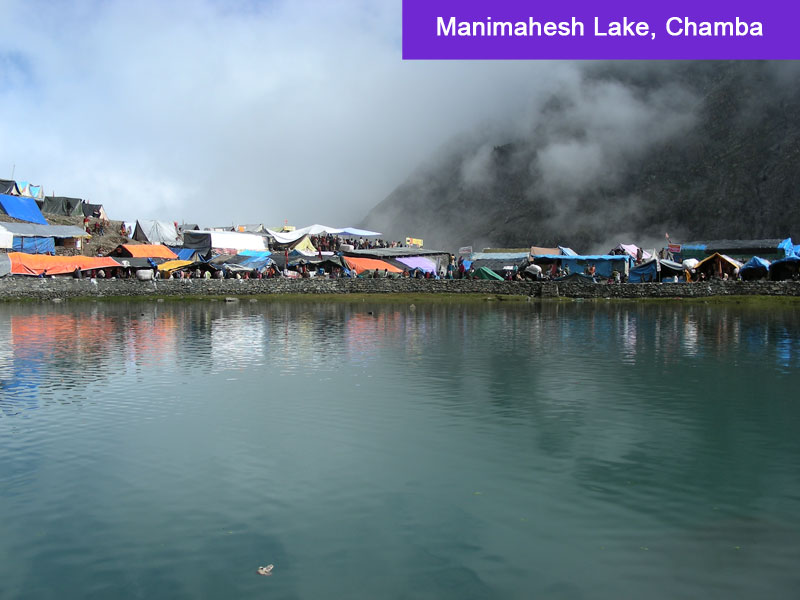 In the lap of Himalayas, on the Pir Panjal Range, Manimahesh Lake is situated. It is more popularly called by the name of Dal Lake. The lake belongs to Bharmour, a part of Chamba district in Himachal Pradesh. The lake is 4,080 meters above the sea level. Manimahesh Lake comes second in magnificence to the Tibetan lake Mansarovar. The word Manimahesh refers to “Shiva’s Jewels”. People say that in the nights when it is a full moon, one gets to observe a reflection of that jewel into the water of this lake. The lake remains closed most of the time of a year because of snowfall. Manimahesh is a great trekking place because it has a walking distance of 13kilometers. After crossing the path, all the tiredness of the way vanishes when the visitors witness the breathtaking beauty of captivating mountains and lush greenery around the lake.

The lake is located at the top of the Manimahesh Kailash Parbat. This place is told to be the sacred adobe of God Shiva. If the legends are believed, He formed this hill with Goddess Parvati as his marital home and people believe that they still live together on the peak of the mountain. The mountain also has a marble statue of Lord Shiva which is called Chaumukha. The lake looks like a saucer. It has two main parts. The first one is Shiv Katori. This is believed to be the place where Lord Shiva takes bath. The other part is Gauri Kund; where Goddess Parvati takes bath.

The main source of water in this lake is the melted ice water from all the nearby peaks. In the month of June, ice melts from mountains and takes the form of numerous little streams. These clear streams flow through the bottle green hills and colourful flowers, giving the meadows a beautiful serene look. The landscapes all around this lake are very picturesque. One can observe the snow all around and little bushes peeking out of these snow-clad mountains. The unpolluted, clean water flows through the valley. The air is chill as ice. It feels pious and pure, filled with all the prayers of pilgrims and the blessing of Lord Shiva and Devi Parvati.

There are various legends associated with this lake. The most popular is about Lord Shiva. People say that, after Lord Shiva married Goddess Parvati, he created this lake. It is also said that Lord Shiva’s displeasure and wrath creates all the blizzards and avalanches in this region. The lake is also considered as Lord Shiva’s penance.

Another popular legend says the Gaddi tribe started to worship Lord Shiva as their deity. Lord Shiva was pleased with their prayers and gifted them the Chuhail topi. This is a type of pointed cap, which is very popular among the tribe. This cap is worn by the people belonging to this tribe along with their other dresses, Dora and Chola. Chola is a coat and Dora is a 10 to 15 meters long black cord. They called the land as Shiv bhumi or the land of Shiva and announced themselves as the purest and truest devotees for Lord Shiva.

Another legend states the land as the adobe of three Hindu Gods: Vishnu, Brahma, and Mahesh. The lake is told to be the Heaven of Shiva. A waterfall named Dhancho is Lord Vishnu’s and a mound overlooking the small city Bharmour is Brahma’s heaven. People say, lord Shiva resides in this mountain for six months of a year. Then lord Vishnu comes to live here. The day when Lord Vishnu comes to reside here is the day of Janmashtami, the birthday of Lord Krishna. Later when Lord Shiva comes back to Manimahesh, it is celebrated as Shivratri.

For all the trekking lovers, Manimahesh is the best place. Trekking to this lake can be a memorable experience. The experience stays in the memory of the trekker for the rest of their life. It is the most beautiful trekking route in Himachal Pradesh. The most amazing trek begins from the tiny town Hadsar. A well-laid trail connects the town to Manimahesh. It starts near Manimahesh nullah and Buddhil nullah intersection. A huge gate and some temples mark the starting point of the trek.

The first few kilometers of this trek are modest but after that, the trekking path is full of turnings and is laid in a zigzag pattern toward the first Manimahesh stream. After a 1km path, one will reach Dhancho which is 2,280 above sea level. From there the trekking path takes one to the valley of floras and faunas along with medical herbs. Crossing this field one reaches Sundarsi.

After reaching Sundarsi, one has to choose between two paths. One is a zigzag path that goes to Gaurikund. The second is a bit difficult. It reaches to Gaurikund via Bhairav Ghati. If the trekker takes the first path, they will cross the Manimahesh nullah over a metal bridge. Manimahesh Lake is 1.5 kilometers away from this place.

The trekking usually takes 1 day but visitors can also take rest and stay overnight at Dhancho. They can stay in tents and kitchen facilities are available there. So there will be no problem with food. It is an easy trek relatively. Pilgrims usually cross this path barefooted.

The lake is most visited by pilgrims during the Hindu month of Bhadon. They come from all around the world. The Yatra or Jatra starts on Janmashtami and ends on Radhastami. It is 15 days long walk. Pilgrims cross a distance of 14 kilometers barefooted on the mountain. A procession heralds this Yatra which is called “Holy Chhari” by local people. “Chhari” means stick. All pilgrims carry a walking stick in their pious trek, so it is called Holy Chhari. Songs and Hymns dedicated to the Lord are sung on this blissful and colourful procession. Medical facilities and transports are also available for them.

From Dashnami Akhara and Laxmi Narayan temple of Chamba, the holy Yatra starts. When the pilgrims reach their destination, they dip in the water of the holy lake to cleanse their soul and then take three rounds of the lake to gain the blessings of the Lord. The women go to the Gaurikund and men go to Shiv Katori for their holy dip. The yatra is recognized as a pious fair by the Himachal Pradesh tourism administration and state government.

The best way to view the wonderful beauty of Manimahesh lake is by helicopter ride. The reservations for a helicopter ride can be made from Chamba or Bharmour. The helicopter will take one to Gauri Kund. From there the visitor has to trek 1 kilometer and visit the lake. They can take the blessings of the Lord there. The scenic beauty is worth the visit. Then they can return to Chamba or Bharmour on a return flight.

Due to heavy snowfall, the lake remains closed during most of the times of a year. But in months of April to Mid November, the snow melts and people can visit this holy lake.

For adventure lovers, the best way to gain a memorable experience is to stay in a tent near the lake and enjoy the starry sky at night.

How to Reach Manimahesh Lake

There are three main routes to reach Manimahesh

Buses, private taxis, and shared taxis are available for all the routes. Visitors can even take a helicopter from Hadsar and Bharmour to enjoy a heavenly view. 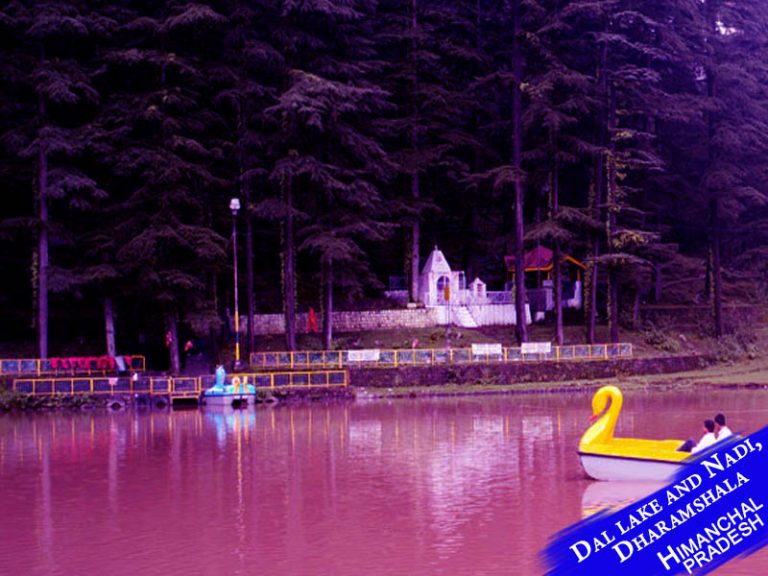