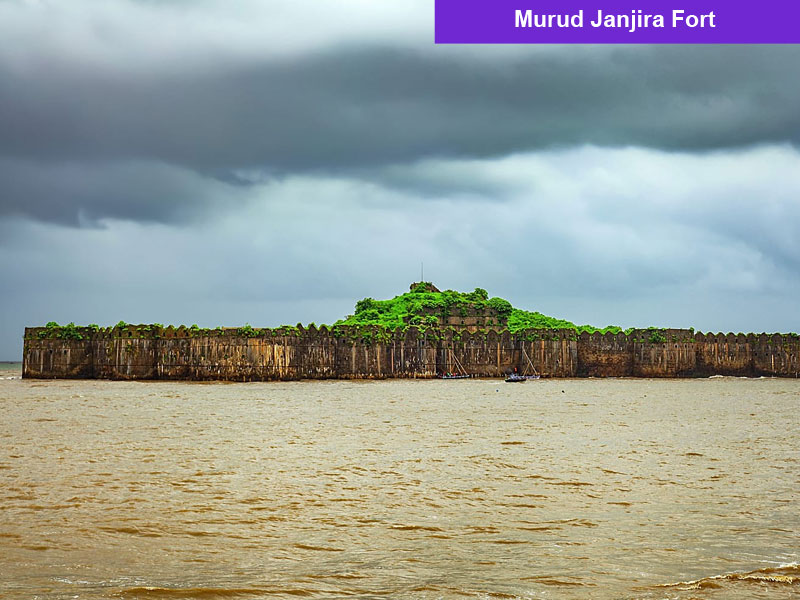 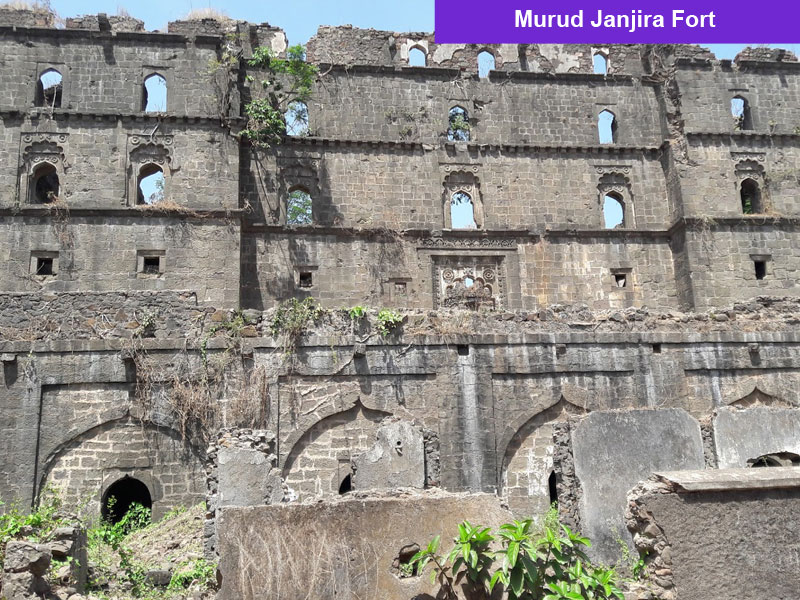 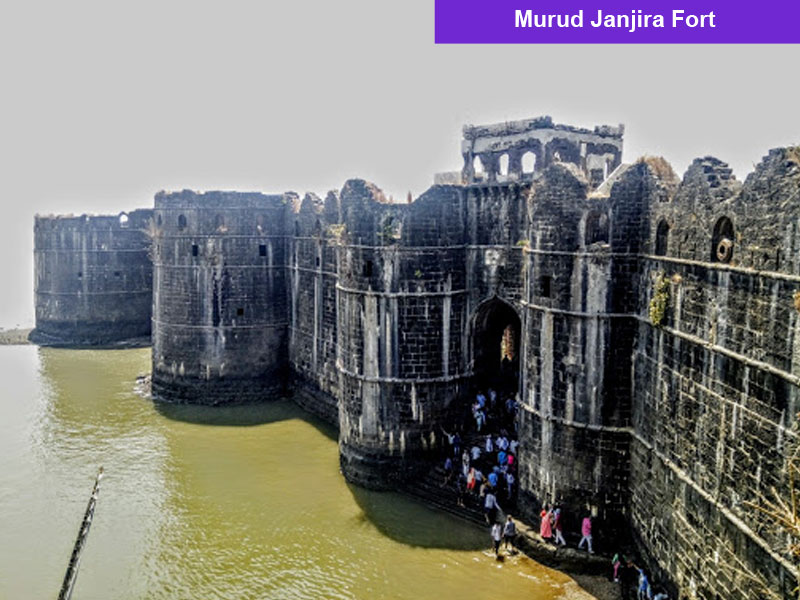 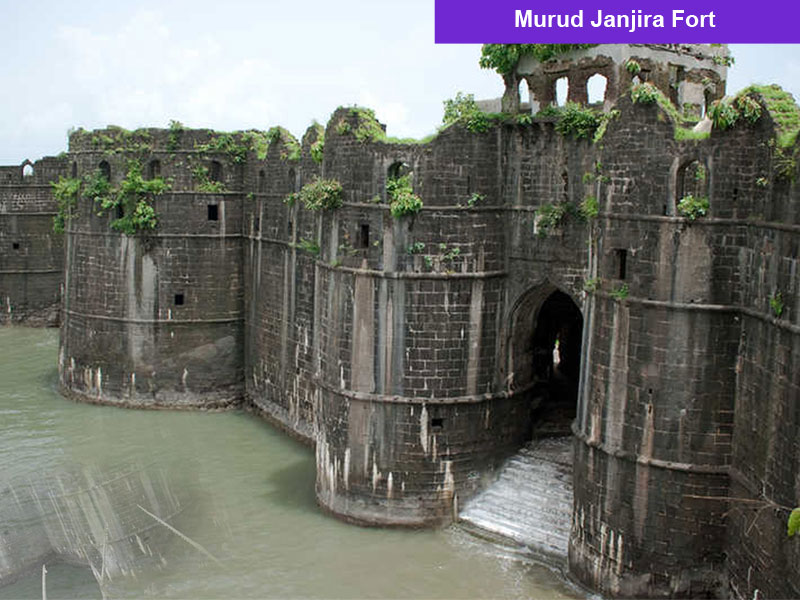 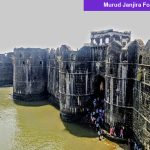 This mighty fort of Murud Janjira is situated near Murud coastal village of Maharashtra, on an island. This fort has surpassed the test of time and that of resilience in the historic times while standing high on a huge rock in the middle of the expanse of the Arabian Sea.

This huge fortification is standing on the sands of a beach with a gentle breeze that sways the palm trees and exudes serene vibes. The backdrop of the fort is the glistening blue sea and the charming clear skies, making it an awe-inspiring destination. For anyone who travels on the Maharashtra coast of Konkan, this fort is a must-visit destination.

The fort reflects its glorious history with utmost pride with 19 of its bastions still standing, even today. Within the distance of a few minutes of boat ride from the coast, this fort is the standing remnant of a forgotten yet strong and powerful part of our Indian history. Its huge figure looks like it is riding from the waves moving towards the sky, giving the impression of an untamable and unbeatable ‘Herculean Leviathan’ within the aquatic territory.

The roof offers a view of the glorious history of the fort and also offers a mesmerizing look of the surrounding Arabian Sea- which is shinning and brilliantly blue in the light of the sun. The profuse history of the Murud Janjira Fort offers an intriguing experience for the history and academic enthusiasts, and the scenic beauty and views encapture the heart of nature lovers and shutterbugs alike. Basically, it has something for everyone.

The history of the fort

Murud Janjira’s history goes long back, to the time of the 15th century, at a time when the local fishermen belonging to Rajapuri had to build Medhekot, a small fort out of wood on a giant rock in the sea in order to save their families and themselves from the pirate attack. Later, a Sultan from Ahmednagar, Nizam Shahi, expressed that he wishes to make the fort as one of the strongholds for his empire due to its strategic location and humungous area.

According to the wishes of the Sultan, Piram Khan, a general, helped in capturing the fort and afterward, the wooden garrison was replaced by a solid rock fort construction ordered by Malik Ambar, a Siddi origin Abyssinian regent, and his administrative spokesperson. Renovations targeted at creating an impregnable construction led to Burhan Khan, the successor of Piram Khan to name the fort Jazeere Mahroob Jazeera. Janjira, its current name, is derived from an Arabic word called Jazeera, which translates to an island, referring to its location offshore. The Konkani word Murud probably refers to the Ahmednagar Shahis.

This sea fort stood unconquered for a long time as the mighty forces of the Marathas, the Portuguese army and even the Britishers failed to cross over the walls of the Murud Janjira fort. The overlords of Siddi gained immense power here and could withstand all attacks to defy its sovereign status of Janjira Sultanate.

Except for some internal ruins, this fort has most of its constructions intact since the last revamp during the 17th century. The Chavri, Kalal Bangadi, and the Landa Kasam are the colossal canons that stand as the three main attractions to the fort. During one point, the fort stood roaring strong in defense with the power of 572 canons, but one can only witness these three now. As per the word of mouth, the canons had the power to shoot as far as 12 kilometers into the Arabian Sea and were made out of a combination of five types of metals. They were essential in defense from the attackers.

There are two significant entryways to the fort. The main door entrance is facing the jetty which is used to take people to and fro the coast and the fort. It is an arched entrance with images of might animals. One side shows one tiger with six elephants trapped in its claws and the other side shows locked tusks of two huge elephants with two lions standing on the side. The main door opens to the three-story structure of Durbar Hall or the court, which is now a ruin. The ‘Darya darwaza’ or the second gate opens to the west directly into the sea and served as an escape during emergencies in the past.

The fort opens at 7 AM and closes by 6 PM. The boats stop carrying people to and fro sometime before 6 PM so it is advisable to have at least one hour spare.

Even though the fort entry is free, one needs to pay for parking if they have traveled by a vehicle and for the boat ride. The parking fee is INR 30, while the price of the boat ticket may vary depending on the size of the boat from INR 20 to INR 300.

Best Time to Visit the Fort

The summers of Maharashtra are not so popular because of the heat. As the way to the fort is through the sea, it is not advisable to visit the fort during monsoon because the boat service is stopped for safety reasons if there is any storm or anticipation of heavy rains, The most pleasant months are the perfect time to visit the fort, that is, between October and March.

How to reach Murud Janjira Fort

The boats to the fort leave from the Murud beach off the Rajapuri jetty. TheMurud Janjira fort is located on an island and there is no other way to travel to and fro the fort. The boat service usually gives people a couple of hours to finish the tour before taking them back.

Nearest cities of Alibag, Raigad, Mumbai, and Pune also have bus services that can take you to the fort. The nearest train station is Roha but the closest major junction is in Mumbai. The Mumbai airport is also the closest to Murud. One can easily hire cabs or private taxis from all the nearest cities and airports, especially if it is a large group.

The price of the boat from the Rajapuri jetty varies from INR 20-50 per person as per the season and other things. Also, it is economically beneficial to book an entire boat for a large group. The boat will lead you to the primary entrance of the Murud Janjira Fort.