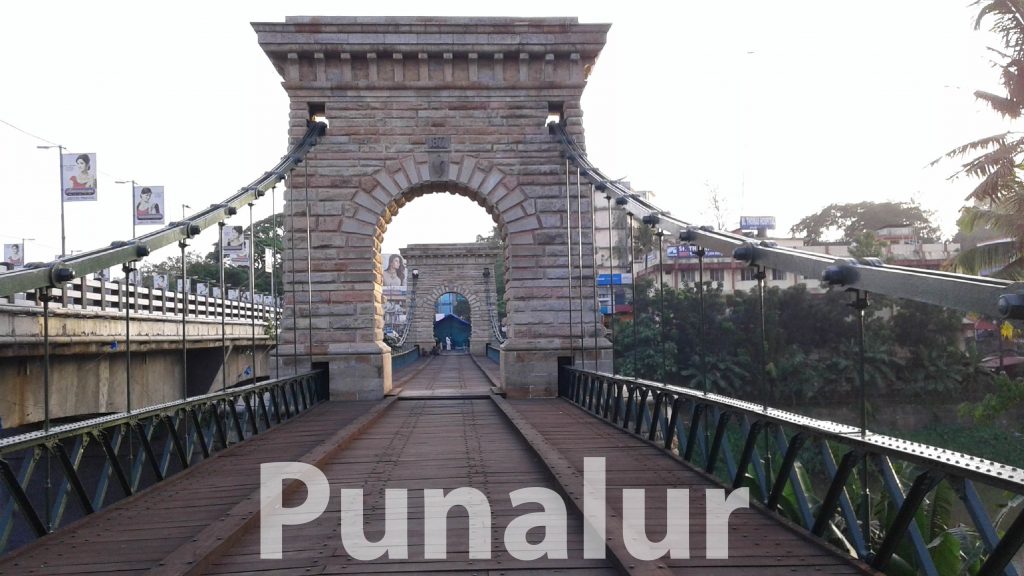 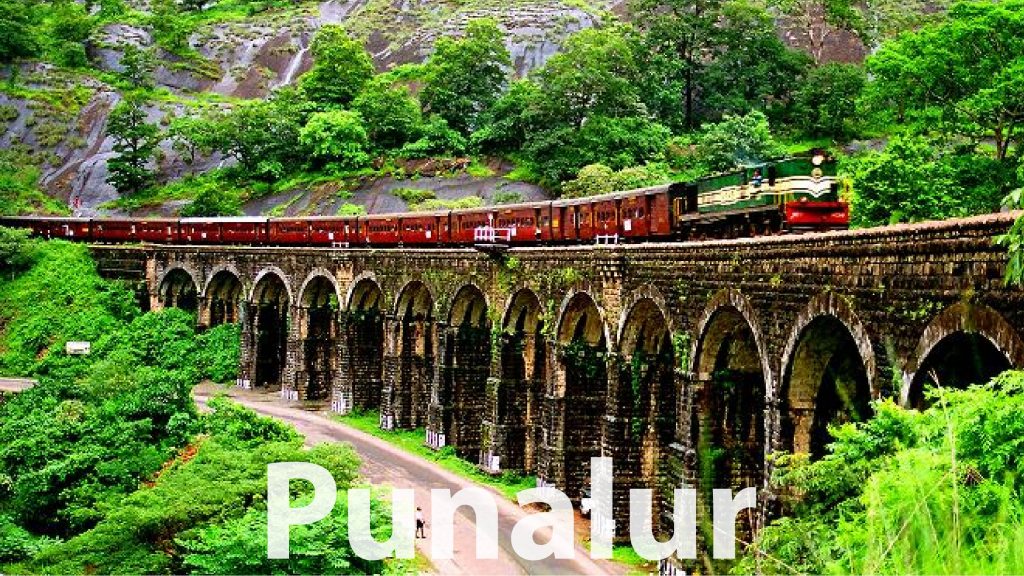 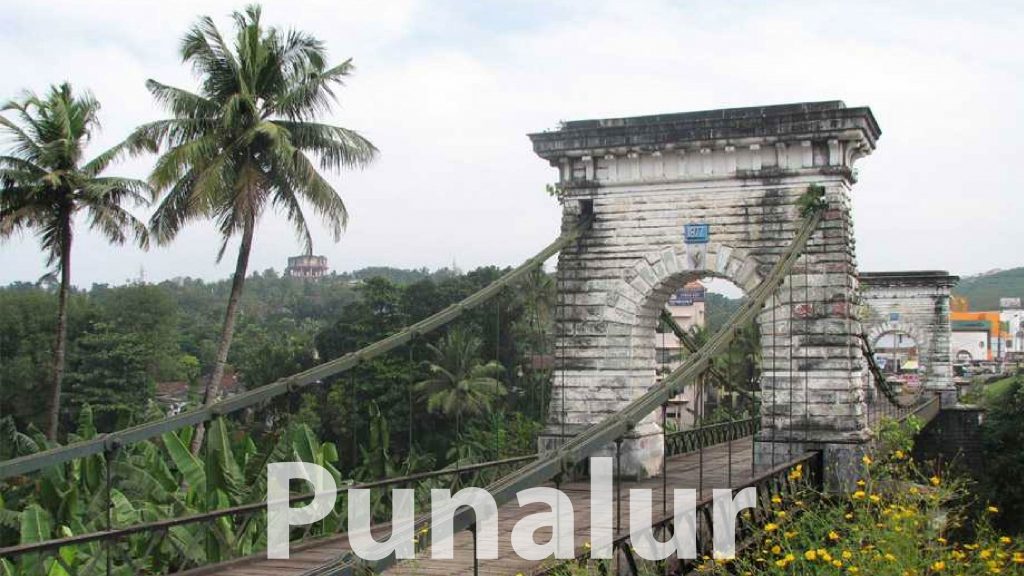 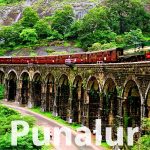 Punalur is a small and quaint city in the state of Kerala situated on the border of Kerala and Tamilnadu. The name Punalur is the mixture of two words–Punal+ooru. Punal is a Tamil word which means “water” whereas ooru is a Malayalam word which means “place”. So, combinedly, it means the “place of water”. An important river named Kakkada flows in the city. A suspension bridge of length 400 m is hanging over this river. Punalur is popular for a wide rage of different spices along with lovely plantation of pineapples and various flora and fauna. This place is not only blessed with a pleasing ambience, but with many adventurous sports and activities. If you are looking for a thrilling jungle experience, then the Thenmala Ecotourism Park is where it can be possible.

It may be small in terms of its geographic boundary, but in terms of trade and transit, it is the second biggest commercial hub in Kollam District. Talking about history, it is the place where the riots against Diwan took place. Getting influenced by the Punalur paper mills, the Keralite industrial revolution began. Apart from the impressive picturesque, this place has many British era architectures which are major tourist attractions

The most popular crops cultivated in Punalur is coconut, banana, palm and many more. This town is located mostly in the middle of the Western Ghats, thus goes by the name, the lap of Western Ghats. People who come to Punalur, get lured by some adventurous sports and recreations such as mountain biking, hiking, trekking and many more. Sme must visit places are Pattazhi Devi temple,  Palruvi and Courtallam waterfalls.

This place has some interesting and important historical significance. The important river, Kallada, is also known as Shenduruny. An excavation was made near this river which revealed some untold story about the Mesolithic civilization. Unearthing was done on the banks of the  age old river.

As mentioned above, Punalur is the place where the first step towards the industrial revolution was taken. This is also the place that witnessed many riots and revolts against corrupt and oppressive authorities. Many social, economic, and industrial reforms were made because of the Punalur Paper mills. It is quite significant because it provided employment ,and helped people fighting against the Diwan rule.

Things To See in Punalur

If you travel using Punalur Railway, which connects Kollam with Sengottai, then you can see some big tunnels carved out of mountain bodies, green valley and bridge over the step. If you want to capture the majestic beauty of Western Ghats along with some captivating surrounding views, especially when the train runs on the track of hanging railway bridge, then a train trip is worth giving a shot.

The construction of this bridge dates back to the British era. Tourists go for a train ride just to have a glance at its surrounding and the river beneath it. This bridge is truly an example of admirable engineering. The significance behind building this bridge was to prevent the wildlife from crossing over the railway track.

In Malayalam, this name translates into– ‘top of the hill’, which is the identity of this place. You can reach this place within half an hour from Punalur. This place has a prominent Shiva temple which draws the attention of many devotees and religious people, especially on the occasion of Shivaratri. This place also reverberates with many legendary tales. This place is said to be situated near Jatayupara. If you remember a character from Ramayana named Jatayu, it’s him who carried this rock on his wings. This place is also a tourist hotspot. There is also a cave situated at the proximity of Malamel Para, and it leads you to the Kulathupuzha forest.

Thenmala Ecotourism Park is one of the major tourist attractions located in the well-known Sahydri forest, and it is the first of its kind in whole India. It is located not far from Punalur. You can enjoy various sports and adventurous activities here. You can go for a walk around the region, rock climbing, mountain biking, and boat riding. The boat ride will take you from the Shenduruny River to the Wildlife Sanctuary. You can also visit a Deer Rehab Centre, the Thenmala Dam, the Nakshatravanam(a nursery), a Leisure Zone and many huts for an escapade. You can go deep into the forest and experience the movements of wild animals by staying in those huts. It’s indeed a thrilling experience.  You can visit the nearby attractions such as Patazhi Devi Temple and Courtallam waterfalls.  You will return your home with some unforgettable experiences and amazements.

Out of many cities of Kerala, you can find Punalur comparatively hotter. In summer, the temperature can go up to 40 degree Celsius. So, the best time to visit Punalur is in the winter–in between October to March.You can visit all the places, especially in the day time as the weather will be pleasant and cool.

You can’t find many hotels and lodging in Punalur however; you can find some hotel and lodging where you can spend your days. You can stay at a 4 star hotel named Kumar Palace, a guest house named Vrindavanam Inn and a lodge with a limited number of rooms named the Kerala Heritage Villa. However, if you have no plan for night stay at Punalur, then you can find many options in the radius of 50 to 60 km. Once you reach there, you can know what could be the best option for your accommodation.

How to Reach Punalur

The nearest airport where you can land for reaching Punalur is Thiruvananthapuram. You can either go by bus or hire a taxi or car from there. Punalur has a railway station that falls on the line of Kollam-Sengottai.