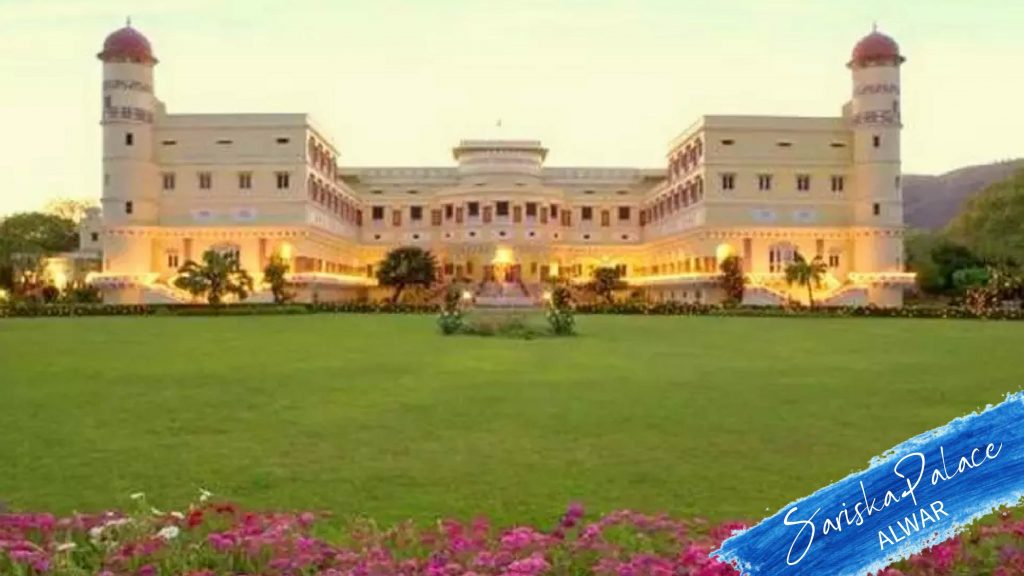 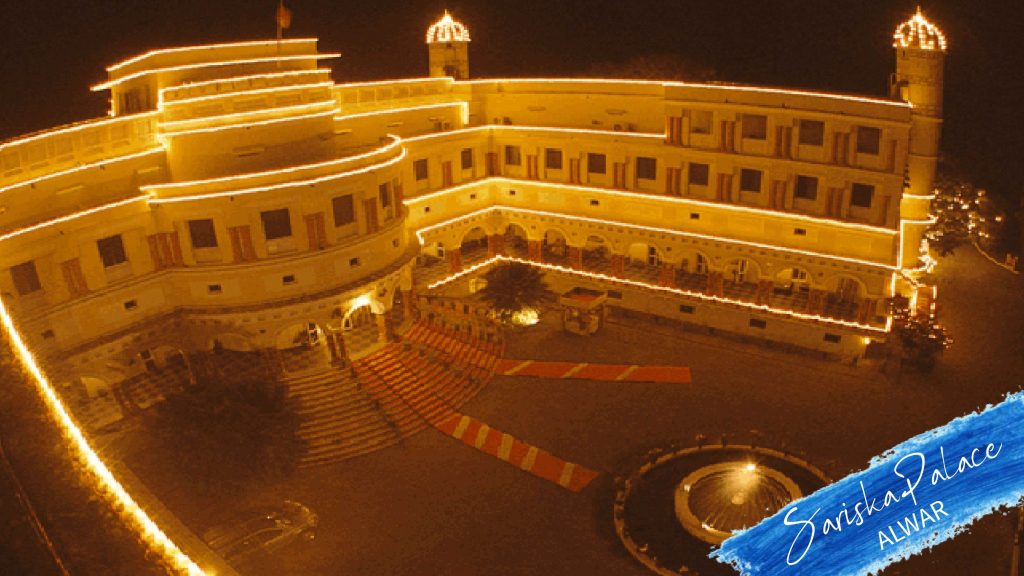 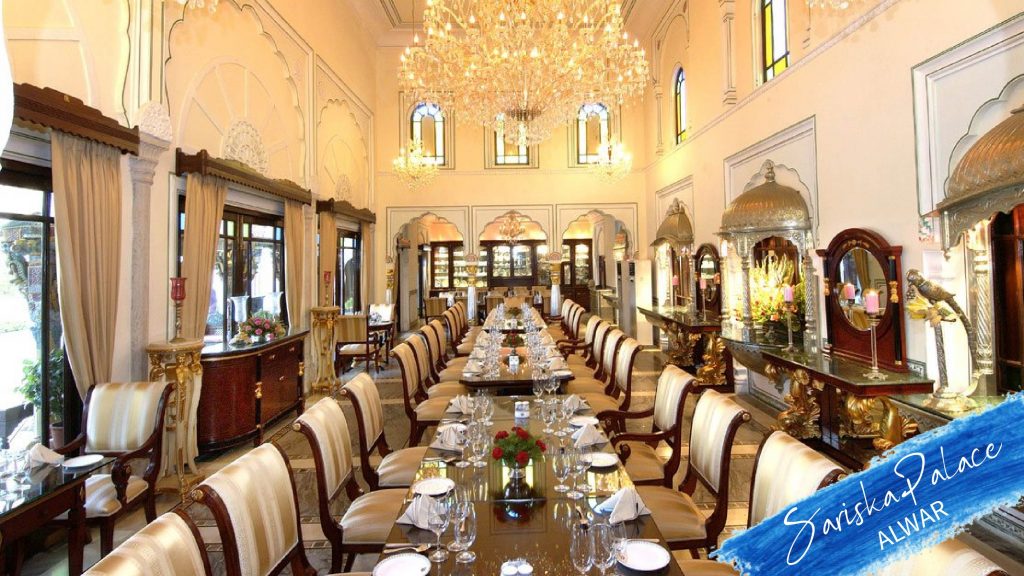 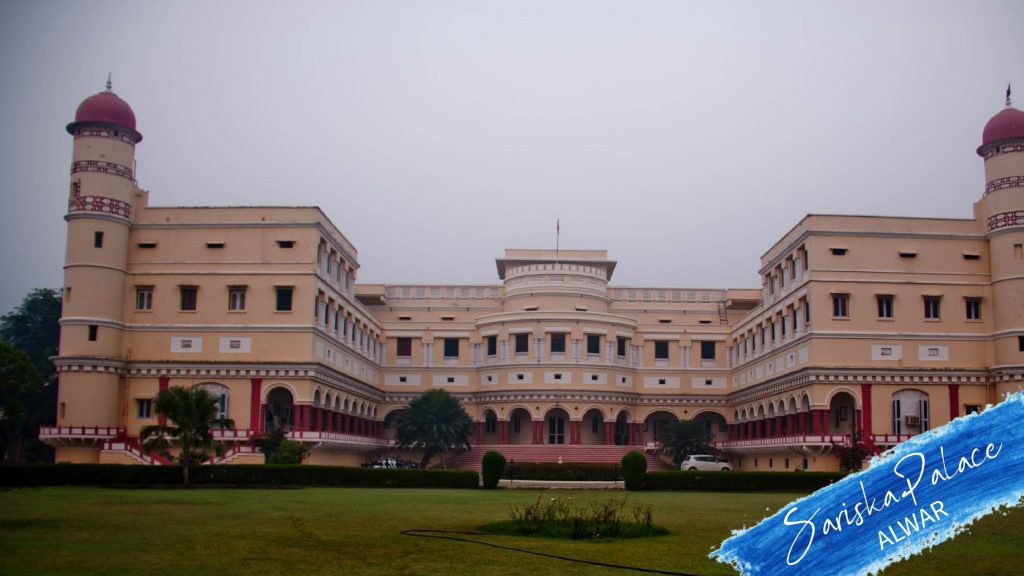 The majestic Sariska Palace was constructed by Maharaja Sawai Jai Singh in 1892. The palace is humongous, occupying an area of about 120 acres and is surrounded by lush greenery and a peaceful environment. It is positioned right at the edge of Sariska National Park and was used by the Maharaj as a hunting lodge for himself and his acquaintances. The setting is the most fascinating feature of the palace. The serene ambience and view of thick deciduous forest on the backdrop of the mansion is a treat to the sore eyes.

Sariska Palace has now been converted into a 5-star hotel and is one of the most famous heritage hotels in Rajasthan. The excitement of spending a night in a hotel which was once used by the Maharaja as his personal accommodation is incomparable to any other feelings. The hotel provides a panoramic view of the dense forest of Sariska National Park. A visit to this palace is a perfect getaway from the busy city life. Who would not love to wake up to melodious chirping sounds of birds! With great 5-star hospitality facilities and spacious rooms, you will be treated as a royal person in the palace.

The main aim behind building  Sariska Palace on the edge of the National Park was to provide the Maharaj and his friends with smooth and convenient location to undertake hunting. It was specially built to welcome the Duke of Connaught and son of Queen Victoria. The palace has a remarkable architectural style and it was highly praised by the visitors of the Maharaj. It was convenient for the royals to spot animals from the balconies of the palace and consequently they carried out hunting from their veranda itself.

Maharaja Sawai Singh spent a lot of wealth in the construction of this palace. He is also known to have purchased 7 Rolls Royce cars just to dispose them off as garbage. He did this to humiliate the salesman of Rolls Royce, who had once belittled the king.

The architectural style of the renowned palace of Sariska is unique in the entire country. Maharaja Sawai Singh had invited an architect from abroad to devise a blueprint for this palace. The mansion represents a perfect blend of Rajasthani and the French style of architecture. The visitors are extremely fascinated by the exotic architecture of the palace.

The walls of the palace, which are light brown in color, gleams in the sunlight. The domed shaped towers are sculpted with perfection and insides of the palace are adorned with paintings of the king and the majestic pillars are meticulously carved with beautiful patterns. The gigantic doors made of flagstone and affluent arches add to the royalty of this palace.

The safari at Sariska National Park provides an opportunity to explore the beauty of nature in great depth. The car rides will take you through the depths of the forests where you will spot several animals in the wilderness. If you are a travel and wildlife enthusiast, you will be thrilled by the jungle safari experience at Sariska National Park. The Reserve is a natural habitat for several species of wildlife such as Royal Bengal Tigers, Leopards, Chitals, Indian Grey Mongoose, Rhesus monkeys, etc.

A beautiful lake of Siliserh and the splendid Kankwari Fort are located in the vicinity of the national park. The fort is situated on a hilltop and was built during the 17th century. The fort has a historical significance as it was at this place the Mughal Emperor Aurangzeb imprisoned his brother Dara. The view from the fortress is magnificent. Reaching the hilltop, you will get a panoramic view of the flying Egyptian vultures and eagles. The lake sparkles in the sun which brings a sense of calmness and tranquility. The pond is also home to several species of fish. You can sit on the lakeside and enjoy the pleasurable sight of fish swimming in the lake.

1. Sariska Palace is well-known for its royal breakfast and you should not miss out on that.

2. The lawns at the hotel are perfectly manicured and extremely spacious. If you are traveling with your family or friends, be sure to carry some badminton rackets or a Frisbee to throw around!

3. Carry a cap and apply a generous amount of sunscreen before you head on your safari. And don’t forget your binoculars!

4. If you plan your trip to the national park between 1st July and 30th September then make sure to book the jungle safari that starts in the early morning. During the peak hour of the day, the park is flooded with devotees who visit the Pandupol Hanuman Temple situated in the forest. So it is better to avoid the rush by booking the early morning safari slot.

How to Reach Sariska Palace 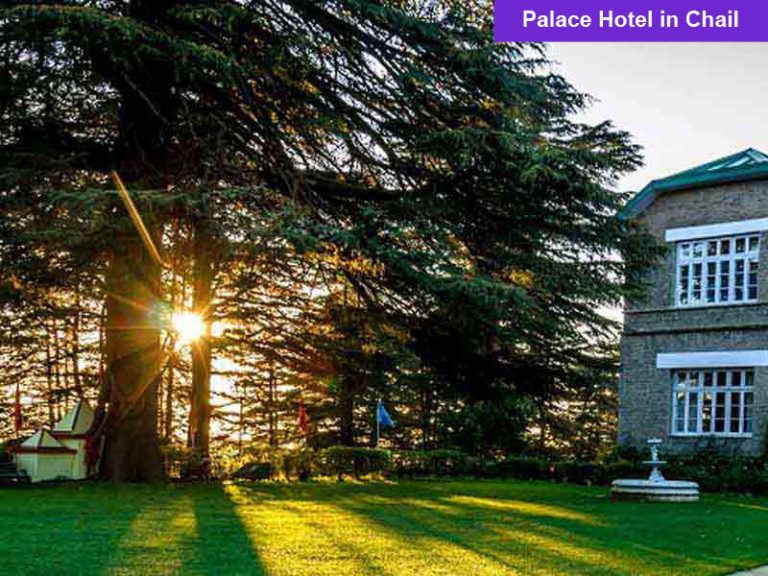