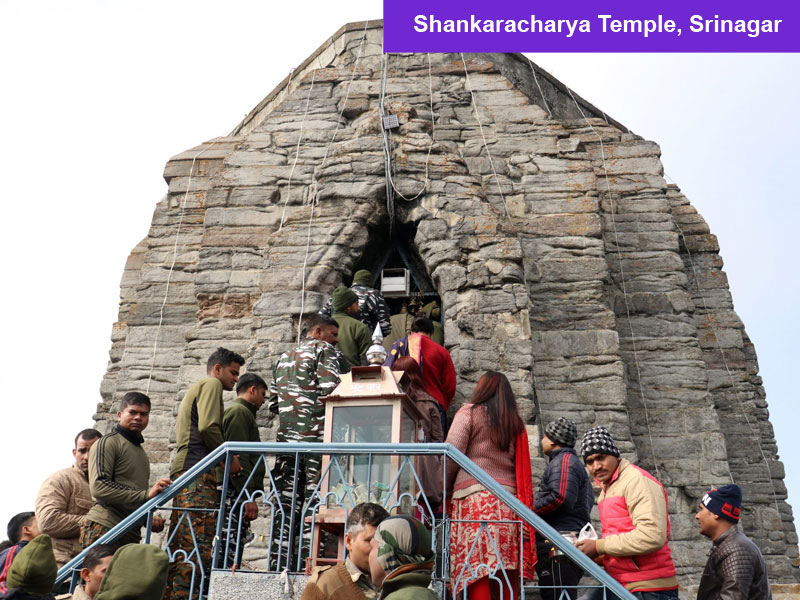 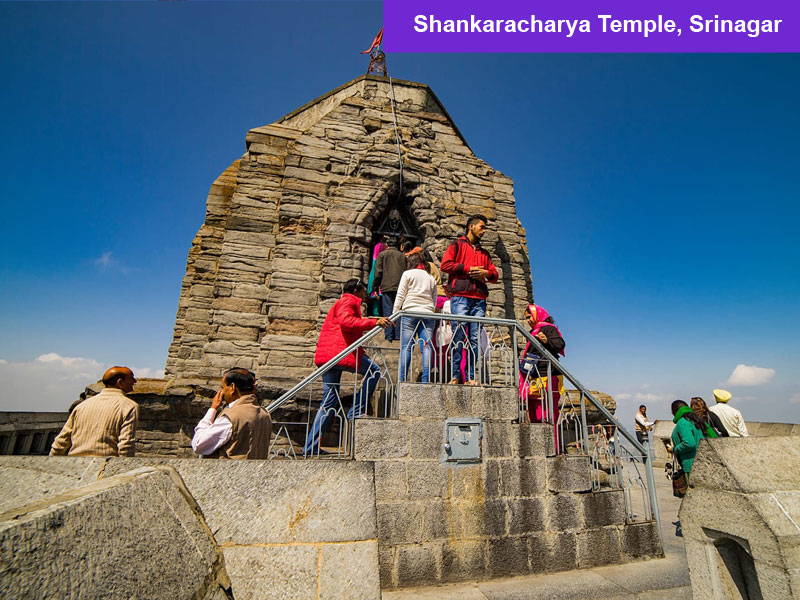 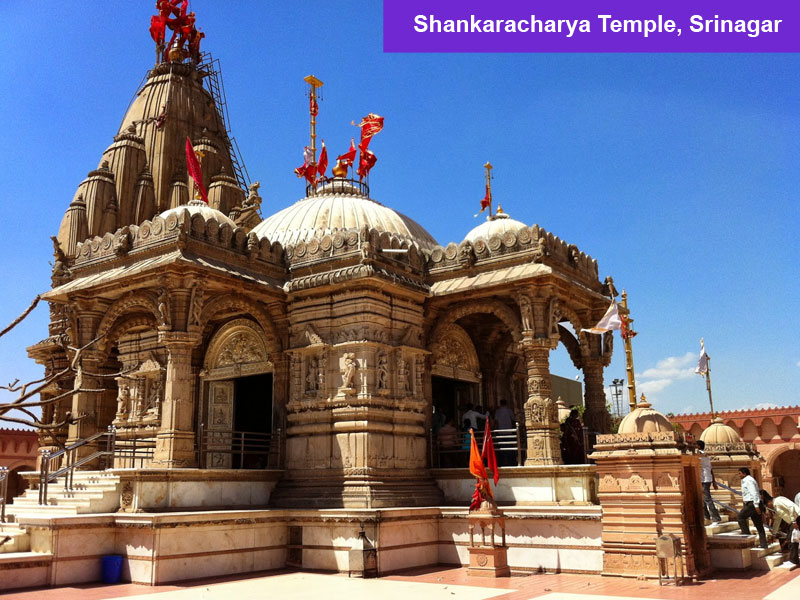 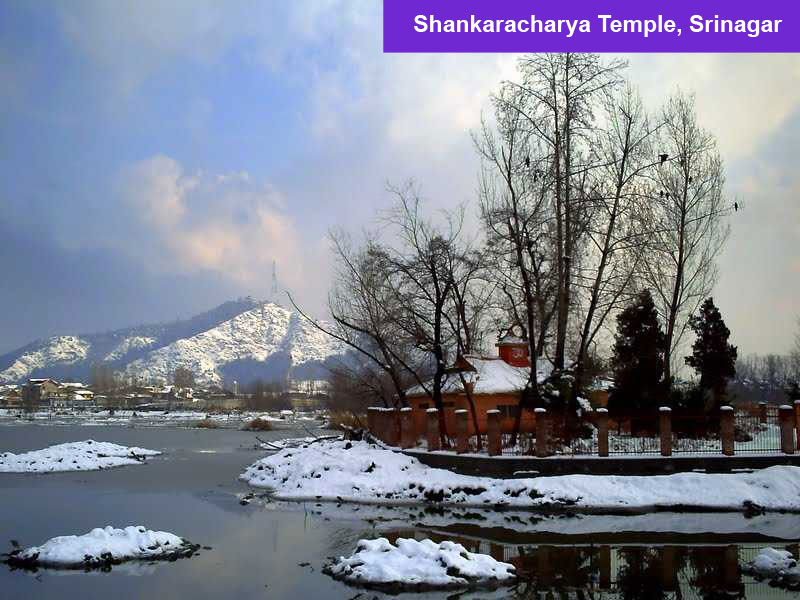 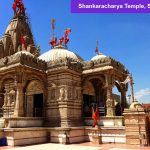 Located quaintly in the Gopadari Hills on Srinagar, the Shankaracharya Temple is a beautiful temple that is also considered an astounding example of Hindu architecture. The temple is also known as Jyestershwara Temple because it was built in reverence of Lord Shiva. The Buddhists call the temple Pas-Pahar. The temple is situated at a height of 1100 feet above sea level. Such is the location of the temple that one can see the entire city of Srinagar from here. Each year, thousands of devotees pay a visit to the beautiful temple during Amarnath Yatra. If you want to experience true bliss and sate your soul, come to Srinagar and visit the Shankaracharya Temple.

It was here that a great Hindu philosopher Shankaracharya attained spiritual knowledge. It is said that he worshipped Shiva Lingam. There is plenty of information on boards around the temple that narrate the incident. After he attained enlightenment, he laid the foundation of four important Hindu schools of Advaita, which is the philosophy of non-dualism. Shankaracharya came to the valley nearly ten centuries ago. The temple is named after him. The Sanctum Sanctorum of the temple is still found here.

The temple is built on an elevated octagonal platform. One has to take a number of steps to approach the temple. There is an interesting fact about the hill the Shankaracharya Temple is situated on. The hill was initially called Jetha Laraka. However, over a period of time, the name was changed to Gopadari Hill. The temple displays the traditional Hindu style of architecture prevalent in ancient India. The interesting architecture of the temple attracts devotees and architecture students to study the style from around the world.

The mention of the temple can be traced back to 200 BC. However, the structure as it stands today was built in the 9th century AD. The temple has Persian inscriptions as well. The beautiful temple is also called the Garden of King Solomon. Some historians and scholars believe that the temple has connotations to Buddhism because, during the ancient Buddhist era, Buddhists used to pray here. They say that after Shankaracharya arrived, it became a Hindu site of worship. It is said that the Shiva Linga within the temple was placed in the 19th century during the Sikh period.

On the contrary, some historians believe that the foundation of the temple was originally laid by the Hindu King Sandiman. He ruled Kashmir from 2629 BC to 2564 BC. Since then the temple has undergone renovation and repair several times.

The Shankaracharya Temple displays an interesting style of architecture. It is famous throughout the country and beyond because of the fact that it was dedicated to the Hindu God Lord Shiva and the way it is built. Since its inception, the temple has seen many changes and renovations. The temple is built on a significantly raised octagonal platform. You need to ascend nearly 243 steps and then further 8-10 steps to actually reach the temple. The steps have a fencing wall on which you will find inscriptions.

The steps leading to the main temple were built by Maharaja Gulab Singh. There were some changes made to the temple during the reign of Shah Jahan as well. You can find those inscriptions within the temple. The main shrine is circular in shape. From here, you get a breathtaking view of the entire valley. You can also view the beautiful Dal Lake shimmering in the sunlight.

The temple underwent its first renovation during the time of Lalitaditya. The second time it was renovated was when it got destroyed in an earthquake the shook the city. Zain-ul-Abideen took the charge of renovating of the mighty temple during the time of Sheikh Mohi-ud-Din. The temple got its electricity connection for the first time in the year 1925. It is because of the several rounds of repairs the temple has undergone that the main chambers look quite new. The temple premises has two small buildings as well. This is where the saints who perform puja here live.

You are permitted to take pictures of the temple. You can take amazing photographs of the temple and sight of the valley from here.

The months from May to September are ideal for tourists to visit the beautiful Shankaracharya Temple. The weather is mildly cold and you will enjoy the atmosphere of the temple. Since Srinagar gets very cold during winters, it is advised that tourists visit before winter to enjoy their trip to the fullest.

1. The temple stays open until 8 PM. However, cars are not allowed to enter after 5 PM.

3. Tourists are checked thoroughly before entering the premises. Please be cooperative.

4. Bear in mind that you need to climb nearly 260 steps to reach the temple shrine. Ascend only if you are physically capable to do so.

5. Dress comfortably and wear good shoes so you can walk around the entire area without any problem.

How to Reach Shankaracharya Temple

Buses are available throughout the day from all parts of Srinagar. You can take any of the state transport buses to reach here. You can also take a taxi to reach the Shankaracharya Temple without any fuss. They are a better option for a comfortable trip. Once you get down from the vehicle, be prepared to walk to reach the shrine.