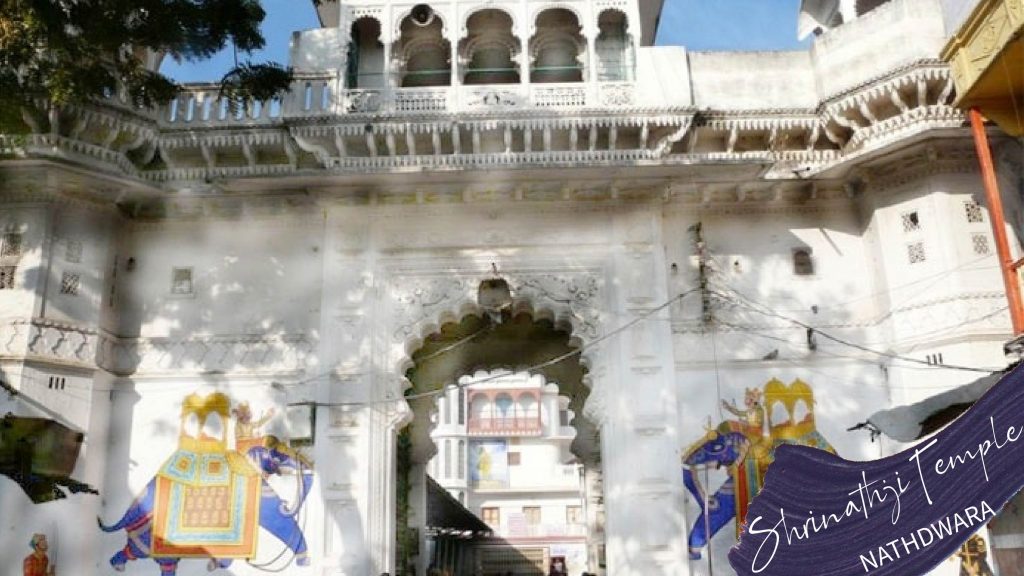 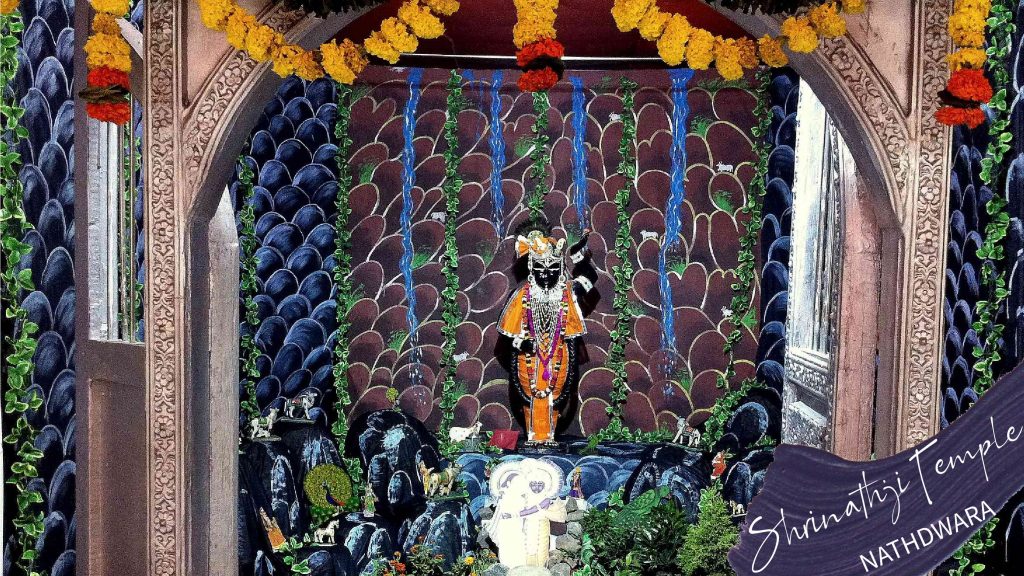 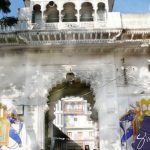 The likeness of Shrinathji, a 7-year-old avatar of Krishna often fondly termed as Gopal, was worshipped first in Vrindavan’s Govardhan Mountain by Vallabhacharya. The Shrinathji idol is a sculpture made of black stone that is believed to have manifested itself in the 12th century BC directly from the Govardhan Mountain that legend says Lord Krishna held up to protect the people of his village from the fury of the Hindu god Indra.

Years later, to maintain the safety of the idol from Mughal emperor Aurangzeb, the Shrinathji idol was transported away from Vrindavan to another location, however, during the journey, the wheels of the cart carrying the idol became stuck in the mud. When the cart would not move further, the priests escorting the idol believed it to be Shrinathji’s wish to remain at that specific spot and a temple was built there. That temple is now known as the Shrinathji Temple, and was established in 1672 with the patronage provided by Mewar’s Maharana Raj Singh.

The Pushtimarg sect of Vaishnavism that was started by Vallabhacharya holds the legend in their scriptures that Shrinahtji would come to Mewar to play the game of Chaupar with the princess Ajab Kunvari. When he would leave to return to Vrindavan it would make her sad, and so he promised the princess that one day when the situation and time was right, he would reside there permanently. The cart carrying the idol getting stuck in this location is thought to be the way that Shrinahtji kept his promise to the princess.

The architecture of the Shrinathji Temple is said to be reminiscent of the Nanda Maharaj Temple located in Vrindavan, considered to be the home of Nanda, the foster father of Lord Krishna. At the top of the temple peak, there are 7 flags representing the 7 houses of the Pushtimarg Sampradaya. Locally, the temple is known as Shrinathji ki Haveli as the foundation of the temple was once a well-protected mansion for Mewar’s Sisodia Rajput and because Shrinathji is believed to be the head of the household and not only a deity. Similar to a traditional well-off household, the premises of the temple have a separate kitchen, drawing room, stable, treasury and also separate rooms for storing sweets, milk, flowers and jewellery.

The Shrinathji temple also has additional temples near the inner sanctum within the main complex, with one dedicated to Madan Mohan and another dedicated to Naveet Priya. The Shrinathji idol is formed out of a black monolith in the historic pose of Lord Krishna picking up the Govardhan Mountain.

Shrinathji is believed to be a 7-year-old avatar of Lord Krishna, and accordingly, the idol in the Shrinathji Temple is revered as Bal Krishna and handled with the utmost care. Apart from daily pujas, the priests also bathe, dress and feed the idol, taking care of Shrinathji as a child, giving plenty of time for rest. The rituals at the temple are supervised by the head priests, considered to be the direct descendants of Vallabhacharya, the founder.

The Shrinathji Temple is home to nearly 500 cows, and their milk is utilized for bathing and feeding the deity on a daily basis. The cows are thought to be the descendants of the very cows that served the family of Lord Krishna many, many years ago.

The darshan ritual at the Shrinathji Temple begins with Mangala, revealing the idol for the day’s first darshan. Next is the Shringar dressing ceremony, followed by a snack Gwal for the deity, Rajbhog for the lunch for the diety, then Utthanpan afternoon rest. Subsequently, the Bhog or dinner for Shrinathji takes place and finally the last puja of the day, the Sandhya Aarti and then time for nightly rest with Shayan.

Photography is allowed at the Shrinathji Temple.

Open the entire year, the temple can be visited at any time. Nonetheless, there are special festivities at the Shrinathji Temple during the holidays of Janmashtami and Holi that are celebrated with great enthusiasm. The festival of Annakutta is especially linked with the lifting of Govardhan Mountain by Lord Krishna and is marked with grand zeal. The Shrinathji Temple tends to be overcrowded during festival times with devotees coming in from across the country.

When visiting the Shrinathji Temple avoid the festivals, however, if you do visit at that time, plan your trip in advance and complete hotel bookings beforehand to avoid the rush.

The closest Railway Station to Shrinathji Temple is the Mavli Junction, located 30 km away, while Udaipur is 50 km away. Udaipur is the airport nearest to Nathdwara, approximately 60 km away, with taxi services costing INR 700 to reach Nathdwara city from Udaipur airport. By road, Nathdwara is reachable by state buses, personal cars, hired cars as well as cabs from neighbouring cities like Udaipur.