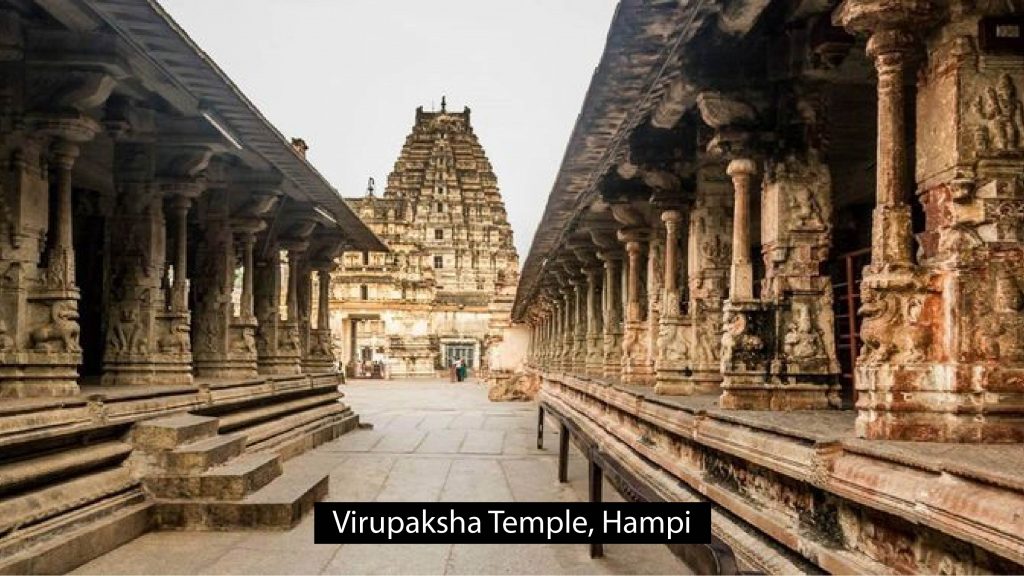 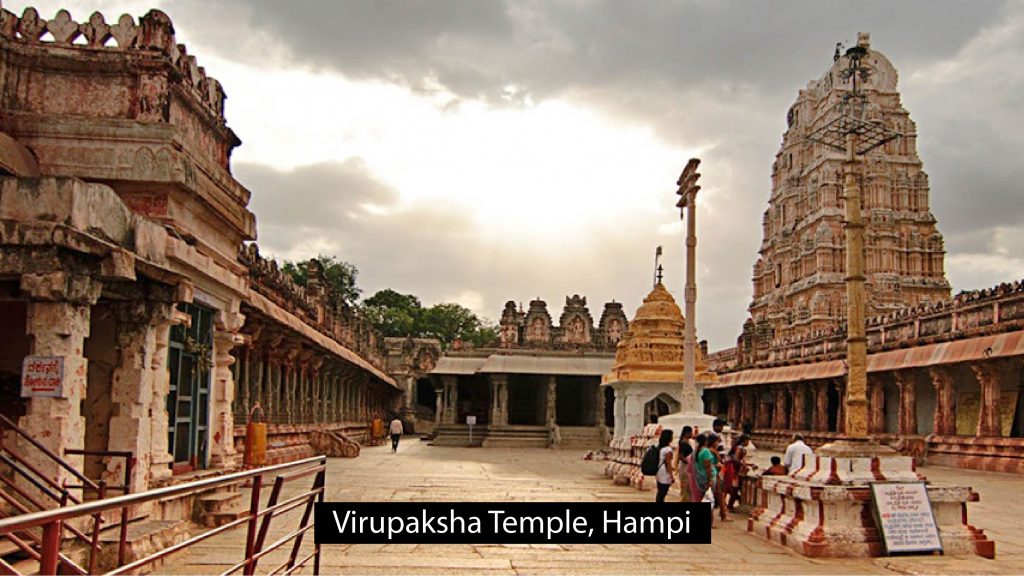 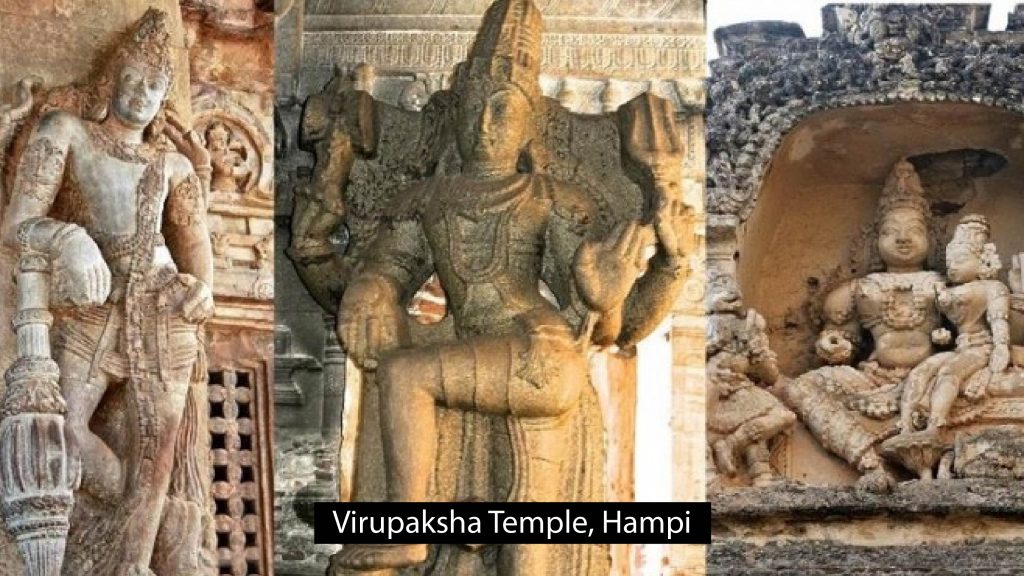 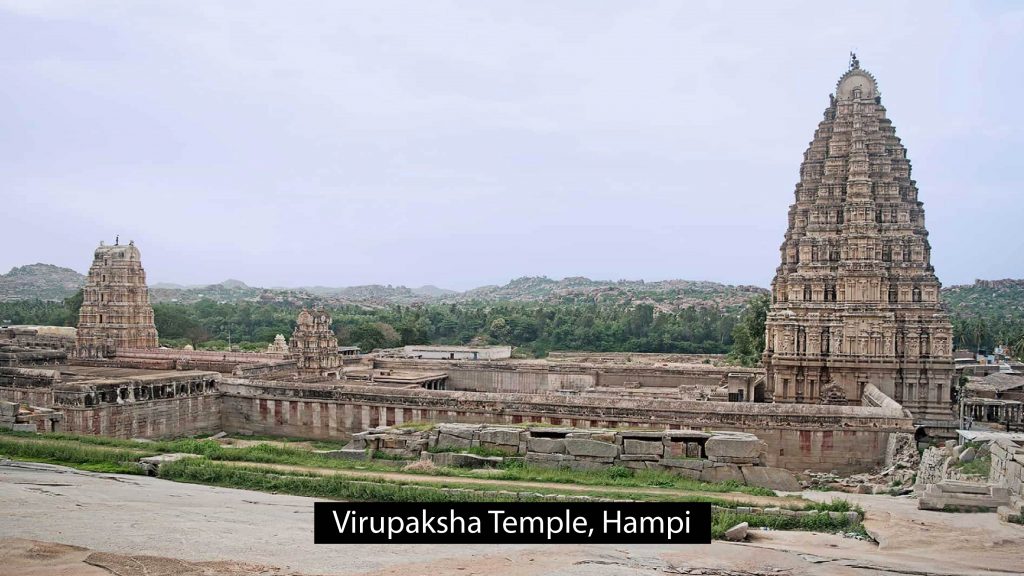 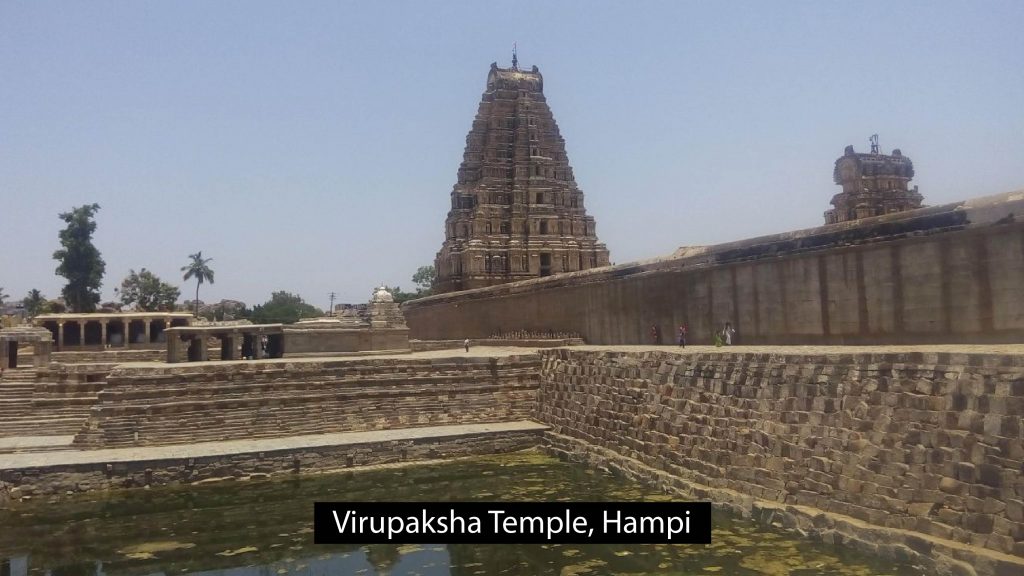 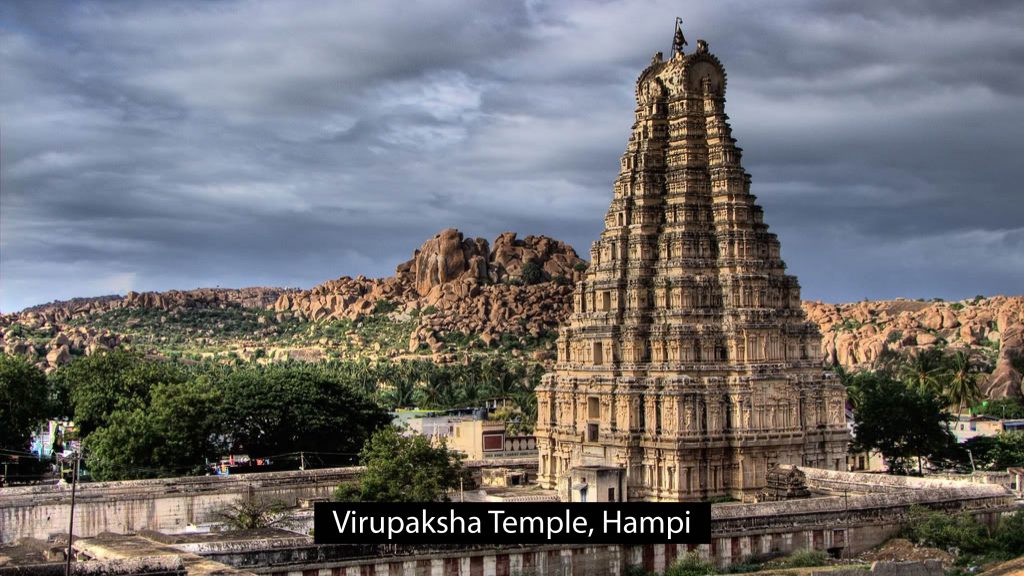 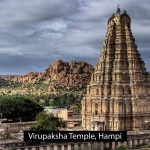 The Virupaksha temple or alternately known as the Prasanna Virupaksha temple is situated in the ancient city of Hampi on the banks of river Tungabhadra. This ancient temple was built in the 7th century. The sheer beauty and marvelous architecture of the temple are the reason why this temple has made into the list of UNESCO World Heritage Site. This temple is dedicated to one of the avatars of Lord Shiva known as Lord Virupaksha. Even though it is now located in the quaint city of hampi, it used to be one of the small shirins of ancient Vijayanagara Empire. You can still see the stone engraving and inscription on its wall dating back to the 7th century. It describes the admiration and skillfulness of those people of bygone era. If you get fascinated by the rich history and culture, this is a must visit place for you.

Once you entered into the temple complex, you can see tall towers(known as Gopurams) which are raised as the gateway for the inner sanctums. It is one of the important features of most of the south Indian temples. Once you stepped inside Gopurams, they will lead you to many inner hall and corridors. You can’t stop without admiring the stone work on them. You can see many mythological stories from the Hindu epics featuring many God and Goddesses. Apart from the main God,  Lord Virupaksha,  you can also pay your tribute to other deities present here. If you are here at the festival time, then you may get overwhelmed by a large gathering, otherwise, it is not much crowded.

The architectural design according which this temple was built is influenced by the South Indian style. This temple has three Gopurams; one lies in the eastern side and is the largest among all whereas the other two are situated in the inner temple complex in the eastern and northern side. The eastern side Gopuram is of 50 m tall and has nine storeys. The outer face of the Gopuram is adorned with many Hindu God and Goddesses. Once you entered into the eastern gateway through the Gopuram, you will get into the outer courtyard which has many sanctums for various Hindu deities. If you see the Bhuvaneshwari shrine situated in the temple complex, you can get an idea of the architecture of Chalukyan period.

Smaller gopurams can be visible from the outer courtyard. You can reach the inner courtyards and other small shrines through them. The 100-pillared hall has a sanctum of  a three headed nandi, the attendant of Lord Shiva. And the inner sanctum of this very hall will lead you to the shrine of Lord Virupaksha. You can find a Shiva linga in the main shrine and the walls and pillars are decoreded so well to grab your attention. You can also see the shrines of various other deities like Nava Grahas, Bhuvaneshwari, Goddess Pampa, Pataleshwara  and many others.

The popular king of Vijayanagar empire, king Krishnadevaraya, contributed a lot for the development of this temple. During his time, some major constructions were done such as the construction of the central pillar hall(known as the Maharanga Mandapam) was done to celebrate his coronation in between 1509-10 A.D. It is one of the most beautiful and attractive parts of the temple. You can see some inscriptions near the hall that tell about the contribution of king Krishnadevaraya to this temple. You can see a ruin site just outside of the temple which used to be a market site in those days.

History and Origin of Virupaksha Temple

This temple is dedicated to Lord Virupaksha who was the husband of Goddess Parvati whom people rever as Pampa in that region. The former name of Hampi was Pampakshetra which refers to the river Tungabhadra(also known as Pampa).

Hampi used to be the capital city of great Vijayanagar Empire, however, it is said that the Virupaksha temple was built even before Hampi became the capital of the Vijayanagara Empire. During the reign of Chalukya and Hoysala empires, which was in the 9th century, a rather simple structure was constructed, but the artistic work was done during the period of Vijayanagar Empire.

According to the information given by the Archaeological Survey of India, this temple was built by the wife of the king Vikramaditya II, Lokamahadevi as a remembrance of king’s victory over the Pallavas of Kanchi. In many inscriptions, you can find written ‘Lokeshwar Mahasila Prasada’ which was to praise the generous act  of queen. It used to be small temple, but it grew bigger with multiple pillars and gopurams under the reign of King Deva Raya II. It is sad to say that this beautiful city of Hampi was invaded and destroyed by the rulers of North India, however this temple is widely unharmed.

Virupaksha – One of the Pattadakal Temples

An interesting fact about the Virupaksha temple is that it belongs to the Pattadakal monuments. It is a collection of Hindu and Jain temple located in state of Karnataka. All the temples that are considered as a part of Pattadakal monuments come under the UNESCO World Heritage Sites. The architecture they show is the blender of northern and southern Indian styles. Out of other temples considered as Pattadakal temples, the Virupaksha temple have the most amazing stone work with the original deity not taken or touched by any invaders in the past.

Festivals and Celebrations at Virupaksha Temple

A grand celebration is held twice every year during the period of March or April at the Virupaksha temple. A wooden chariot is decorated with lights and flowers and Lord Virupaksha is place in that chariot. A grand procession is done around the city by carrying the chariot on the chariot street of Hampi. This is a remarkable day when the Lord Virupaksha gets married with Devi Pampa or Goddess parvati.

1. You need to put your footwear outside. If it’s not comfortable for you to walk in bare foot, you can wear your socks only.

2. Photography is not allowed in the main sanctum.

How to Reach Virupaksha Temple, Hampi

You can also take a train to the Hospet Junction which is 3o minutes away from the Virupaksha temple.